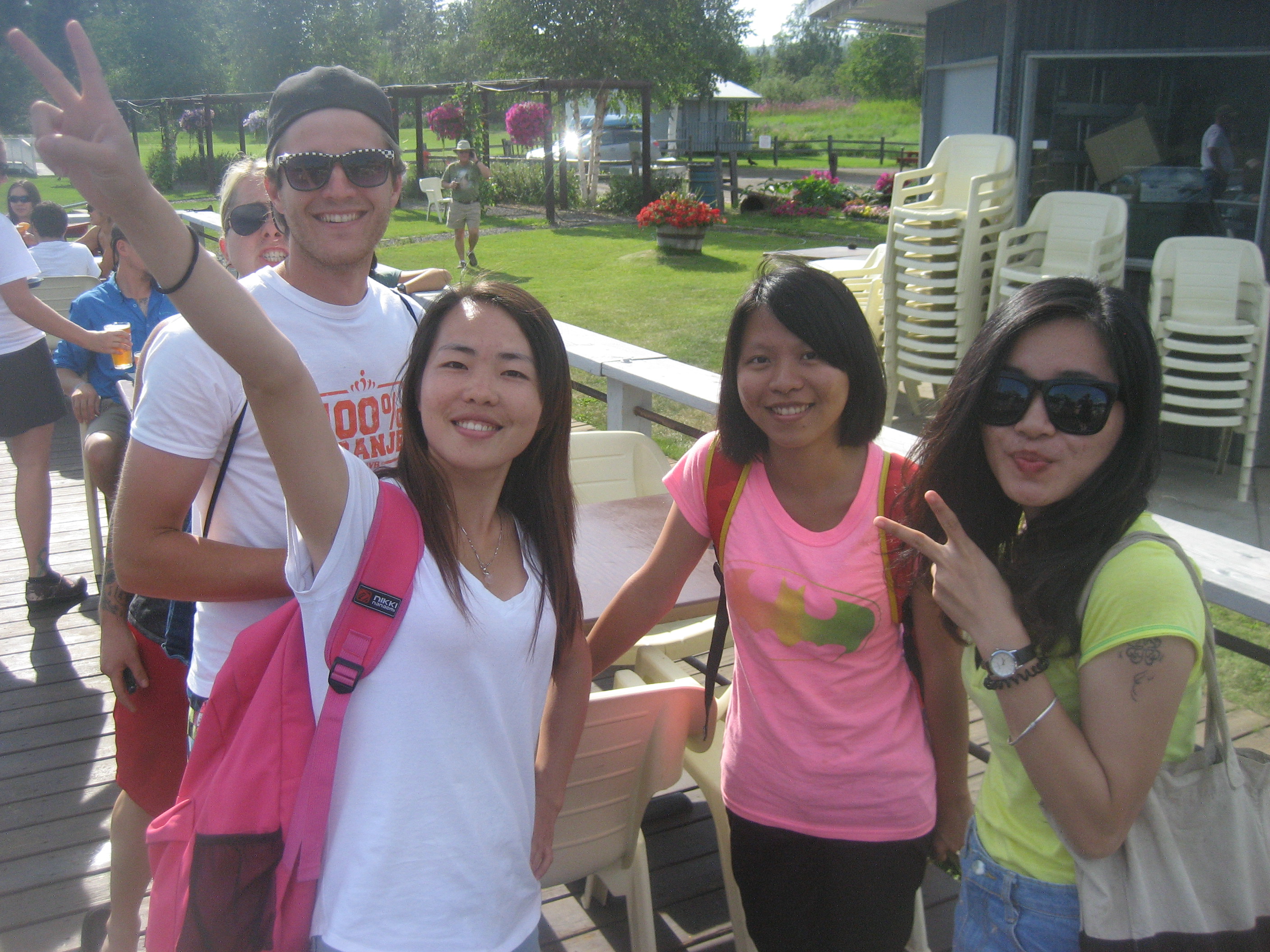 After a canoe trip on a free day along the Chena River in Fairbanks, Alaska, three Chinese students and a Slovak student are part of the international carnival crew at Golden Wheel.

"Men's natures are alike, it is their habits that carry them far apart."
Confucius

All three of my bunkhouse roommates in Alaska are Native Alaskans - describing themselves as Aleutian, Athabaskan and Kenaitze

Carny quarters in Chugiak and Fairbanks are a mix of languages, including Albanian, Cantonese/Mandarin, Hawaiian, Jamaican Patois, Samoan and Slovak.

In other carny quarters around the U.S., English is mixed with Spanish and Afrikaans.

Carnivals are melting pots of ethnicity, with Mexicans and South Africans leading the way. The globalization of world's labor force hasn't left out carnivals.

In Alaska, the foreign workers are needed during summer's tight labor market but Mexicans and others face resentment across the country as some Americans see them as taking jobs Americans want.

International workers come a long way to work in American carnivals. In some carnivals they are the vast majority of workers. They are central to the cultural make-up of carnival crews.

This morning I'm writing from The Bakery along College Road in Fairbanks, Alaska. I wake at 5 am to write before the show opens. When most carnies wake up around 11 am, Randy's bunkhouse will be blasting Hawaiian rap music to wake the camp and to start his near constant dancing.

An ethnic Samoan raised in Hawaii and whose first language is Hawaiian, Randy wears his hair long and his chest and arms are tattoo galleries. He is relatively short, with a muscled physique.

He probably will have a towel wrapped around his waist as he dances out of his bunk, to the bathroom, brushes his teeth, dances back and disappears behind his door to change into his show clothes.

A handsome, dancing Samoan/Hawaiian, toothbrush in hand, isn't what outsiders might expect to see in the carny quarters.

The Street of Storytellers

In the Silicon Valley, it was Mexican music - Spanish-language rap to traditional accordion - played nightly and sometimes until the early mornings on payday. Bottles of tequila filled trash bags the morning after payday.

In Marlboro, New Jersey and Jefferson Valley, New York, Jamaican music rattled the walls of my bunkhouse as I feel asleep, imagining what my neighbors lives were like back in Kingston and St. Catherines. Sweet smoky scents wafted through the vents.

Here, at the Tanana Valley State Fair in Fairbanks, there are international horticulture, law, medical and psychology students traveling with us.

One afternoon after a long day of setting up rides, three Chinese women from Guangzhou Province near Hong Kong invited me to share their "real Chinese" dinner of rice, corn, sausage and spices.

Young, petite and prone to laughter, they sat on folding chairs outside their mobile home as they told me about their degrees in business and translation. I told them about my adventures in Xinjiang Province in far Western China.

"Oh, that is our last frontier, like Alaska is for you," Jokey said.

Talking with them reminded me why such exchanges hold such time-honored significance. A few years ago I visited "The Street of Storytellers," in Peshawar, Pakistan along the fabled Silk Highway.

It was a street filled with "storyteller" merchants - often coming from China - who told about their experiences.

In carnivals across America, I find myself with these storytellers from around the world. I'm working in "Carnivals of Storytellers."

Still, the outsider status carnival workers have is magnified for carnies not of the local dominate ethnic or racial group.

Carnival owner Freddie McDaniel would gather carnies around him after some shows and warn us to be on our best behavior because we are different. Still, that difference somehow makes us feel like we are in this together.

"In this business you have three strikes against you. You're in a carnival. You're black. And you're Puerto Rican. And I'm not even prejudiced. I hate all of yez. (laugh line) But you know as well as I do, if someone gets robbed three miles from here, who do they come looking for, the carnival workers."

When passing through Calgary hitchhiking to Golden Wheel carnival in Alaska, I tried to get work at the Calgary Stampede. It bills itself as the "Greatest Outdoor Show on Earth," which carnies would call a "bally."

NAME runs the carnival portion of the event, which will attract about a million visitors.

My backpack on my back, I walked onto the lot past security and up to a group of carnies working on a carousel.

I was met by a big, burly South African with steel-toed shoes, clothes covered in dust and a hard hat tilted back on his head. He looked like he could lead a safari in Kruger National Park.

"Are you South African? My niece was born in South Africa. Sorry to hear about Mandela. Do you need set-up help. I've done this sort of work before."

Seemingly pleased, he said I should buy steel-toed shoes and come back. I'll be hired.

It took me a half day of searching, but I came back with brand new steel-toed shoes and was given my hiring papers. When asked my social security number, I knew my number was up.

"I'm an American but I'm willing to work off the books."

We went through several bosses, all visually pained by their inability to hire me. I may have even met the top boss of NAME's Canada unit.

"I knew the woman who runs Golden Wheel, she's quite a person," he said when I told him I was on my way to Alaska.

I walked off the Calgary Stampede campus to the tune of hammering, buzz saws and trucks moving about. I looked around and was sorry that I was missing another chapter for Eyes Like Carnivals.

The second ride I got hitchhiking out of Calgary laughed hard for a couple minutes when I told him this story. As a person who enjoys making people laugh, I saw irony but no humor in my story until my driver explained.

He looked across from the steering wheel.

"That's the first story I ever heard, of a carnival doing something legal."

We have met the enemy and he is us

Classic was the first carnival I worked for after coming out from Chicago. "Genial George" employs a range of carnival workers but he sees the trends in the industry.

"The story of American carnivals really is about the Mexican worker," D'Olivo said. "They come here and work hard. Pool their money for food. Save their money. Send their money home."

Up high on the Super Slide overlooking the Butler Amusements carnival in West Oakland, I looked down one evening at sunset to see a bright, white tour bus pull up to the lot and men come pouring out. They went to the luggage hatches and hauled their life's belongings into the lot.

It took them two days to get to Oakland from Tlapacoya, in Veracruz, Mexico. They came from a feeder town and within weeks, we were getting pleas from management to write home for more friends and family to come.

Across Mesoamerica, select towns empty of men as they head north to work in traveling carnivals.

I intend on visiting Tlapacoya at the end of my year working in carnivals to get their perspectives from home.

NAME also relies upon brokers to round up workers in South Africa, having a longstanding relationship with many carnies who come back year after year. Most of the South Africans I saw at NAME were white South Africans.

In the Chicago area, I hear that Windy City Amusement also gets South Africans.

This kind of international recruiting also fosters animosity. Black carnies I knew in California openly resented the Mexicans getting jobs they thought could go to local brothers and sisters.

After an all-night tear-down of the carnival at St. Timothy's in San Mateo, a veteran Black carny was boisterously upset the Mexican crew was paid and went home before the American workers who worked until dawn.

As another carny tried to calm him down, he shouted at him too.