A webcast of Carnival Corporation's shareholders meeting at the W South Beach Wednesday morning was reportedly shut down after the event was infiltrated by a group of concerned Miami-Dade citizens critical of the company's measly tax contributions.

20 activists each purchased one share in the cruise giant in order to have access to the meeting, according to Local 10, while about 200 more lingered outside the hotel with signs.

Carnival CEO and Miami Heat owner Micky Arison opened the meeting with a statement about the Costa Concordia disaster and observed a moment of silence.

Even before fielding questions from the shareholders, Arison addressed HuffPost Miami's Tuesday article about a protest at his yacht, according to a person present, saying "We're not bad guys."

He went on to list his and the company's philanthropic efforts, including patronage of the New World Symphony, saying Carnival could conduct business elsewhere but chooses to remain in the Miami community. According to a person present, Arison suggested if Carnival paid all the taxes protestors wanted the company would be forced to operate out of China.

Carnival, which made over $11 billion in profits in the last 5 years, paid just 1.1% of their profits in taxes according to the New York Times, approximately $3.8 billion less than what would be required by the statutory U.S. corporate tax rate. Instead, the business is registered in Panama though it is headquartered in Doral.

"Although they're headquartered here, only 4% of the Carnival workforce comes out of Miami," one of the shareholding protestors told HuffPost Miami, "and we have all these massive problems and they're so rich. Why don't they just pay their fair share of taxes? It would help alleviate the economic condition of which their company is in."

Rev. Dr. Guillermo Marquez-Sterling, a United Church of Christ Minister, was the first to speak, addressing Carnival as being in the "valley of greed."

By the time the second shareholding-protestor made his remarks, Carnival shut down the live webcast of the meeting, replacing the audio with what one protestor called "elevator music."

Arison tweeted Wednesday afternoon that the meeting had been "interesting," but did not elaborate.

UPDATE: Carnival spokesman Vance Guilliksen said Arison revealed at the meeting that Carnival pays over $400 million in taxes and fees around the globe on an annual basis. In a statement, the company said the majority of its income is earned outside the U.S.:

At the international level, there is recognition that it is impossible to develop a tax system by which the income of a shipping company is fairly apportioned and countries typically impose head taxes and other types of taxes in lieu of income taxes. Virtually all jurisdictions where our ships call impose taxes and/or fees based on guest counts, ship tonnage, ship capacity or some other measure. These taxes are included in our cost of operations.

This story is developing. View tweets from the protest below: 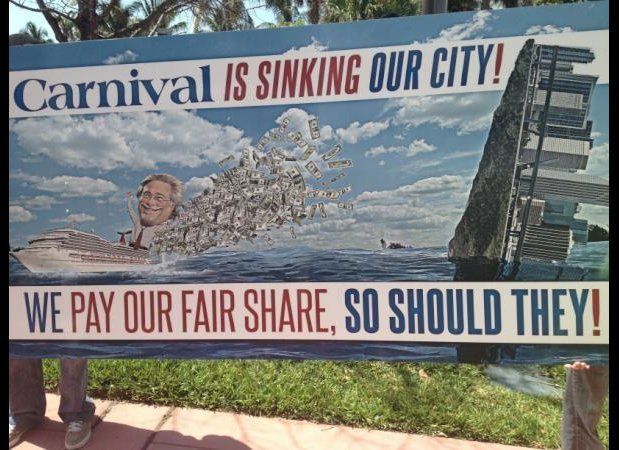