DERWOOD, Md. -- There are more than 650 carnivorous plants in the world and Michael Szesze guesses he's got about "four to five hundred" of them growing outside his house in suburban Maryland, not far from the nation's capital.

"Looks like suburbia in the front of the house," he says. "Come back here and it's this incredible garden of carnivory."

That incredible garden is in Szesze's back yard abutting Rock Creek Park, where marshy beds -- carnivorous plants like to be wet -- host hundreds of colorful protein-eating plants.

Szesze is the founder and owner of the Carnivorous Plant Nursery, one of the nation's only nurseries devoted to killer botany. He's liked carnivorous plants since he was a child, and became professionally interested while still working as a science teacher as a way to get students interested in botany.

"Kids would roll their eyes and say 'plants are so boring,'" he says. "I'd bring out a couple of carnivores."

Other teachers showed interest but didn't know where to get plants. Szesze opened his nursery in 2000. The nursery did better than expected. In 2004, he retired early to work on it full time.

His collection -- an impressive amount of which you can check out online -- includes plants both rare and common from every continent except Antarctica. The plants kill in a variety of ways from sticky leaves, to a glue-like substance emanating from tentacles to the Venus Flytrap's famous three-haired trap (each Venus Flytrap "head" can only close a few times before it dies, Szesze explains).

Read more below our slideshow ...

Szesze shows off how one of his pitcher plant can kill a bee, which is hanging around the underside of the plant's lid. Drunk on nectar, the bee moves part way down the enzyme-filled pitcher itself, where insects are digested. After a tense few seconds, with a lot of buzzing, the bee escapes -- only to fly right over to the lid of another pitcher plant.

A brick-and-mortar store is in the cards for Szesze's carnivorous plants. For now, visitors are welcome by appointment. Szesze says his visitors come from all over the world -- he's expecting someone from Japan next week who's otherwise in the D.C. area for business -- and are not just 10-year-old boys.

Wednesday's visitor, besides The Huffington Post, is 10-year-old Spencer Ricketts who brought his mother, Valerie, and his 12-year-old brother, Steven, with him to see the plants. As Szesze walks around the nursery with Spencer, the two identify plants together, talk about their origin and care and whether the plants will eat stinkbugs -- they will. Valerie explains that the family is visiting as a late birthday present.

Spencer, after choosing three plants to take home, says he likes carnivorous plants because "the insects around your house will start to disappear."

Also, he says, "a Venus Flytrap is more like a pet than a garden plant."

The family leaves and Szesze moves into the screened porch at the back of his house where he drinks a glass of water. Tropical pitcher plants hang in baskets around him.

"This was intended to be a retirement hobby," the 30-year science educator says. "The amount of interest and inquiries and sales has been exponential."

From the porch, it's possible to see some butterflies of uncertain fate flit around the neat and colorful nursery grounds.

Take your own field trip to the Carnivorous Plant Nursery -- get contact info here.

Is there somewhere you'd like to see us visit for our next field trip? Let us know at dc-tips@huffingtonpost.com. 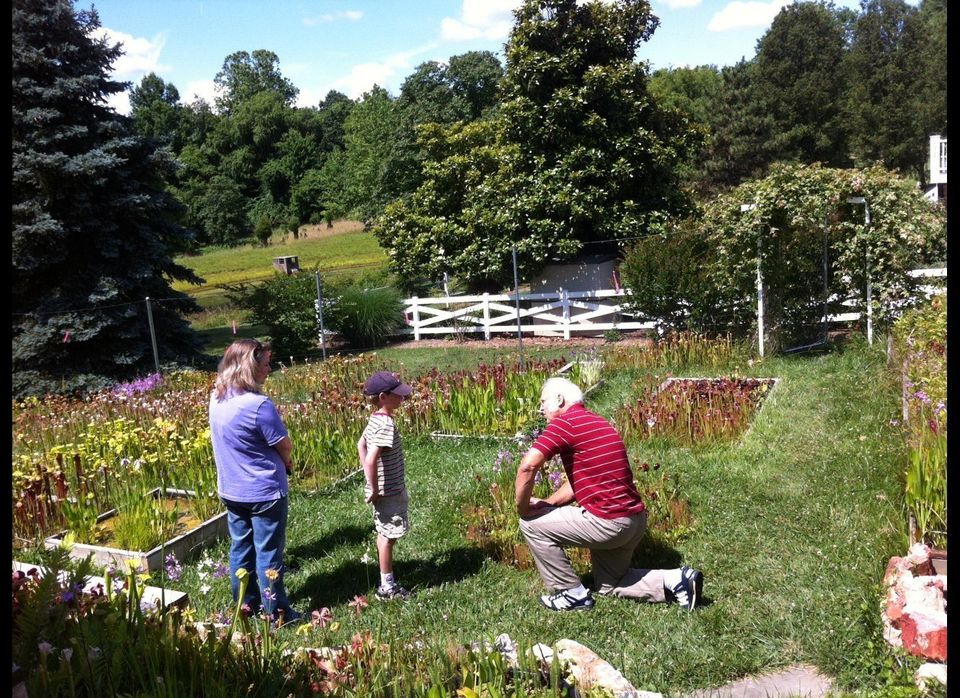