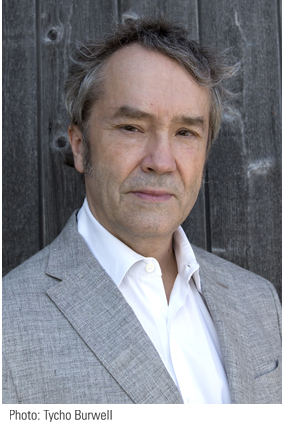 Todd Haynes' film Carol, an evocative love story set in the 1950's, adapted from an edgy Patricia Highsmith novel, The Price of Salt, is nominated for six Academy Awards including Best Original Score, composed by Carter Burwell. His music can be heard in several current movies including the Oscar nominated animated Anomalisa, and the Coen Brothers' Hail, Caesar! I caught up with the Carol composer by phone in early February, when he was in Hollywood for the pre-Oscar luncheon for those nominated, to talk about Oscars, his work on Carol, and the Motion Picture Academy.

How do you feel about being nominated?

I'm excited. I've been writing film scores for decades. I never waited for awards for what I do, but this is the highest honor.

How did Todd Haynes direct you?

Todd Haynes was hired by the producer and sent me the script. I began at that point collecting songs from that period, 1951-2. Todd sent hundreds of songs but I didn't write music until the rough cut, thinking what the music could bring to the movie. I composed a special sound each for Carol and for Therese so you hear them before you see them. Todd likes to go for it. In the final scene, there's no dialogue; he wanted to just say it with camera [Ed Lachman's cinematography is nominated] and music.

You've worked with the Coen Brothers all the way back to Blood Simple and through the current Hail, Caesar. How different is it working with them?

It doesn't really matter about the director. In the end, it's the film itself. Hail, Caesar is the same period 1953, yet it is so different in style and story.

The Academy is undergoing some upheaval this year. Does that affect the music categories?

As a member of the academy, I think the move for dynamic changes in gender and race is good. I also think the academy should be open to other kinds of film scores. Last year, they wouldn't even nominate Antonio Sanchez' non-traditional film score for Birdman. The music branch decides on eligibility, with all kinds of rules for exclusion. Carol is a traditional score. They should allow people to select the scores that are the most important, more diverse and non-traditional. Art is not something you should make rules about.

How will your life change if you win the Oscar?

Ah, I could move to Hollywood and spend the rest of my life sitting next to a pool. It's not like I'm hoping someone will call and ask me to do Disney or James Bond. I'll continue doing the films I like doing and living in a small town on Long Island