Carolee Schneemann is perhaps most widely known for her 1964 piece "Meat Joy," in which a mass of naked youths frolic and roll amongst chicken legs, paint, sausages and fish. It's a feast of raw flesh and a celebration of bodies of all kinds. 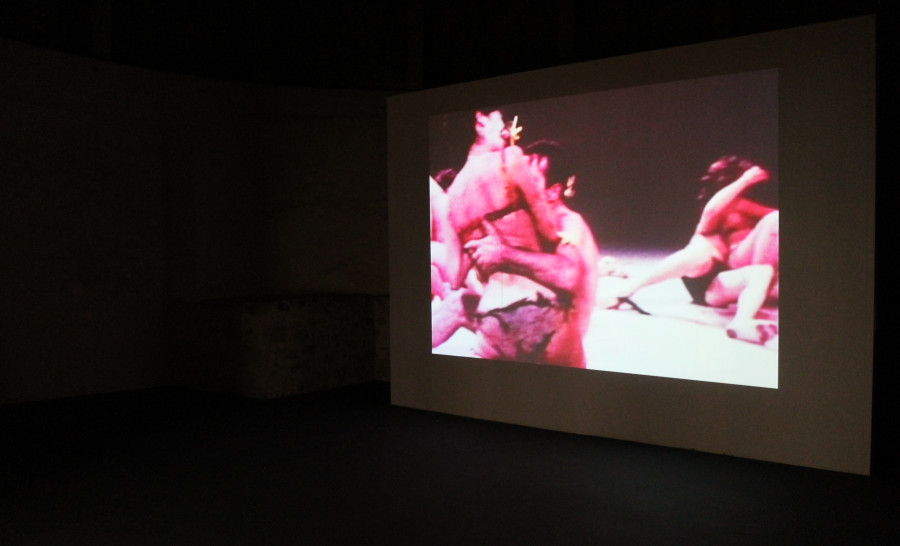 If you don't recognize Schneemann from "Meat Joy," you almost certainly know her from "Interior Scroll," in which a naked Schneemann extracted and read a feminist scroll from her vagina. The precursor for "The Vagina Monologues," the work physically collapsed the space between body and text.

The artist, now 74, is lauded as one of the pioneers of feminist performance art, and although this strand of her work is most discussed, it is only a portion of her contribution as an artist. Schneemann's historical and political works take center stage in her current exhibition on view at the Musée départemental d'art contemporain de Rochechouart, a museum three hours outside of Paris. The exhibition, entitled "History Works," include "Viet-Flakes," a compilation of Vietnam War-era horrors garnered from magazine and newspaper clippings, as well as "Terminal Velocity," a series of bodies falling from the World Trade Centers on September 11, 2001. Schneemann approaches the terrors of war and intrusions on cultural freedoms with the same ferocity as she does women's liberties -- and with the same aesthetic acuity as well.

We reached out to Schneemann to learn more about the politics of war, the politics of the body, and where these intersect. Speaking from an old farmhouse in upstate New York, Schneemann shared her wisdom on Manet's "Olympia," selfies, narcissism and the dangers of deodorant. 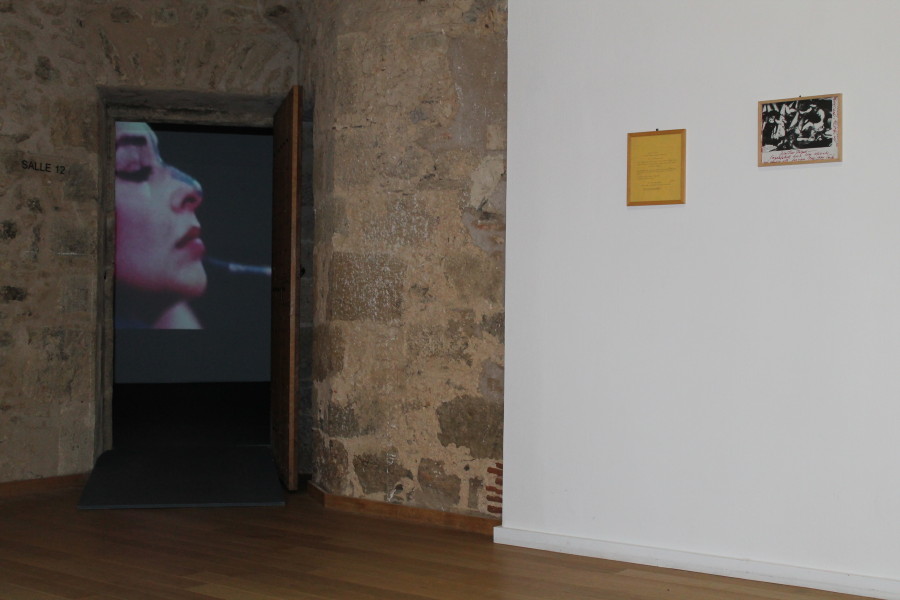 How does it feel to see "Meat Joy" in an exhibition after all these years?

"Meat Joy" has such an intensive dynamic and carries all the themes of physicality, intensive improvisational contact and training with me. It carries itself through time and that's been very interesting to look at. It is amazing to have the "Meat Joy" video and photos in this ancient castle museum. It's a very grand space.

Tell me more about the space.

Yes, the spaces are huge but they're warm, they have this elegance of ancient stone and wood. For me, it's thrilling to go from one large intensive installation to another, walking to another area of the castle and hearing my audial scores. The sounds are very important in the work. It's very magical for viewers to be there. It's hard to describe because it's utterly unique. It's the traditional fantasy castle with a mote, huge stone walls and and vaulted ceilings, but at the same time there's a physical warmth when you're there. 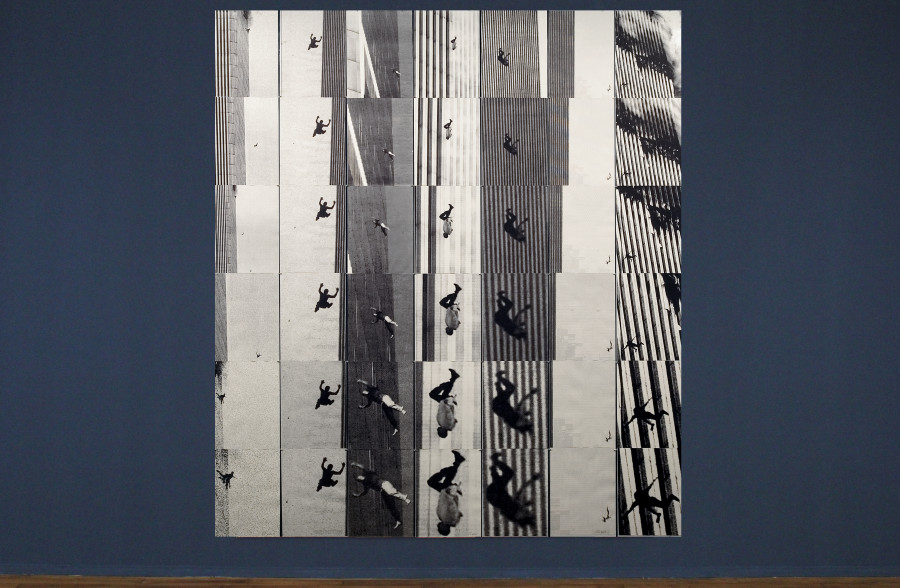 Tell me about "Terminal Velocity" and how it relates to media's role in national tragedy. How does the media propagate images differently than an artist would?

I work with the immediacy of images in conflict and the work of mine goes between really outrageous disasters and destructive militaristic impositions on culture to images of domesticity, harmony, sensuousness and peace. The scope of my work shifts a lot.

"Terminal Velocity" relates to my work on Vietnam, my intensive film and performative work on our aggression in Vietnam and my studies on the destruction of Palestinian culture in the 1980s. These are very dark geographies in the nexus of the work. "Terminal Velocity" was an In Memorium; it was an attempt to get closer and closer and closer to the representative figures who were either jumping or thrown out of the windows by the extensive heat and falling to their deaths [on September 11]. I wanted to study them and try to understand aspects of falling and what the absolute dynamic of gravity was going to do. I was not commenting on the social construction of information.

You played a version of Manet's "Olympia" in the 1960s. What attracted you to her as a figure and what role do you think she served in the trajectory art history?

I wasn't attracted to the role at all, I was actually interested in collaborating with Bob Morris. "Site" was completely his concept. I was interested in the history of Olympia working as an artist's model since she was herself a very accomplished painter. She was a serious painter whose works were often in the Salons, many of which refused Manet's work. It's a very complex issue in relation to gender aesthetics. She's known now as a model but in her life she was known as a painter and a musician. I'm interested in how history can marginalize and deform a figuration, how a woman that becomes iconic -- in male work. At the same time it was an extraordinary experience to be in Bob Morris's conflation of painting and sculpture.

What do you think of the critique of narcissism which is something often applied to female artists and specifically performance artists? Do you think that's a valid criticism or a technique to shut down female artists?

Every female artist who is using her body does so differently and with different motives and different aspects of physical intelligence. So a general condemnation of our actions as narcissistic is meaningless, absolutely meaningless. Also, I take narcissism from the analysis of Lou Andreas-Salomé, the remarkable historic figure who was a great friend of Tolstoy and Nietzsche. When she worked with Freud she created a theory of narcissism that doesn't have to do with self-involvement or self display. Her theory has to do with losing the self in its identification with what it perceives. So it's a very painterly theory of narcissism. A narcissism that's not a narcissist, but a process of deeply identifying with perceptual forms. For me, that's a very painterly kind of narcissism, but it's not the one that's bantered about regarding certain kinds of woman's activisms that are explicitly erotic or physical. 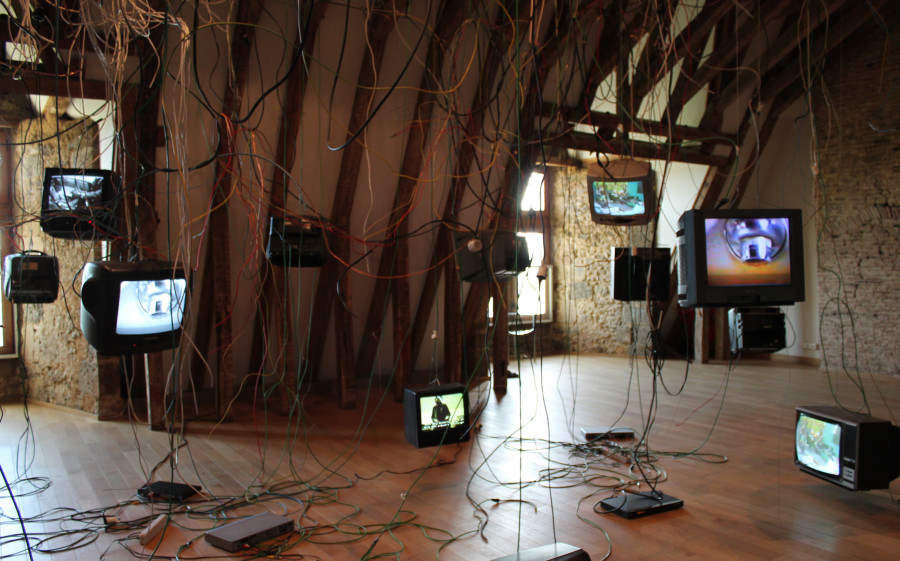 Are you familiar with the talk going around online about selfies?

Yeah, sure. In some ways I started the selfie.

That's why I wanted to ask! There are some who say they're cries for help, still conforming to partiarchial views of women. But at the same time, with the selfie, women are in control of their own image. What do you think?

It's a silly debate. Some of them are just commodifying the moment. It doesn't have any rigorous necessity, it doesn't introduce larger aesthetic questions or perceptual issues. I'm interested in some that are extremely unexpected. There is this one video of a young woman in Buffalo, New York alone in the bathroom with her camera where she eats her tampon. Do you know this work? It's very unassuming. She said in the video "I don't know why I'm doing this." People brought this to my attention thinking I'd be outraged, that this is the last step a woman can take. But it's very tender, it's a touching work, very self exposed, and it raises deeper issues about essences and a very profound taboo.

What do you mean "about essences"?

If you smell yourself, if you touch yourself. Culturally we are very anxious about how we smell, how we touch, how we feel, if we're menstruating, the forbidden aspects of viscosity, lubricity, ejaculation, etc. These are all very typical Americana cosmetic issues requiring lots of soap and deodorant. It makes us question: How are you in your skin? 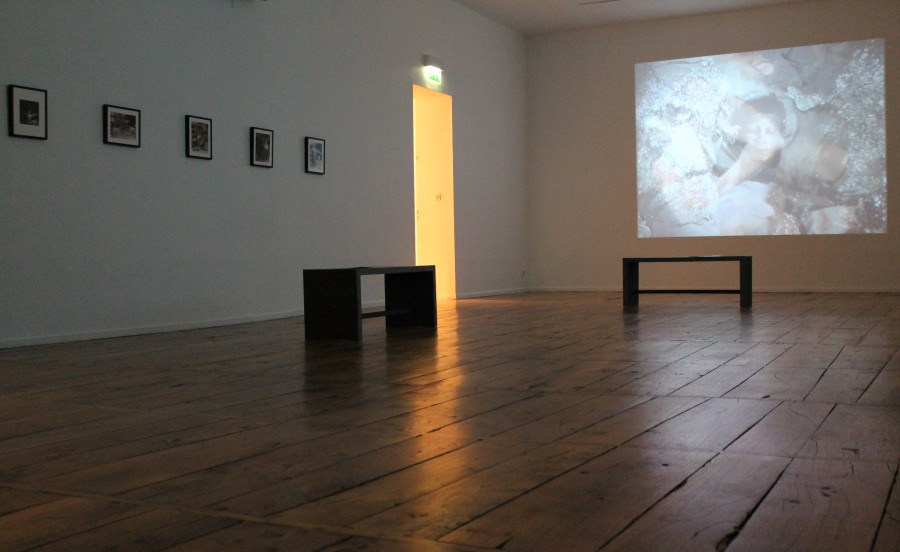 Women have shaped performance art history more than other media like painting and sculpture. Do you think this is mostly because the medium is more contemporary or has something to do with the fact that the woman's body is still on display?

It's very complex. It can have to do with many of those issues and none of them. Certainly performance art has been feminized and has been identified with women's expressive modalities. Not all of which involve being naked, but might. But taking the woman's body back from a prurient culture, taking it back and disturbing preexisting taboos and conventions has been one of the premises of women's performance art.

Do you think women have more agency today in the contemporary art world?

Yes, absolutely. Pick up any art magazine from fifteen years ago and there would be almost no women in it. Not writing, not exhibiting, not acknowledged. There are always constellations of women in art history and they have always been revolving around a group of more powerful men. Now there is a tremendous interest and commercialization of women's art. It's not all good, it's not all significant, but it's a cultural dynamic that women are in view and engaged.

What do you think is one of the biggest fights of contemporary feminism?

Maybe commercialization. That success is now lined up with the realm of glamour, money and accoutrement which in essence have nothing to do with an originating vision but they do have to do with establishing recognition in commercial culture. I think women artists have a chance to deflect that and break that grip apart. 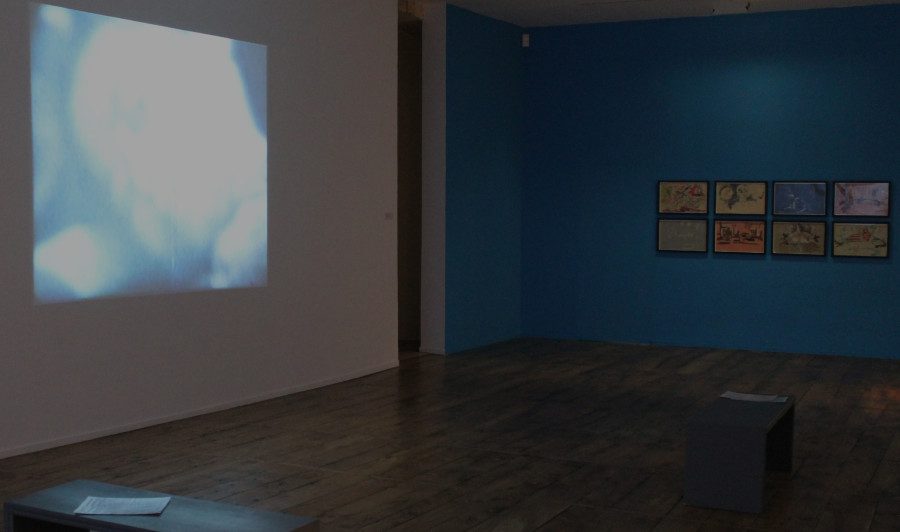 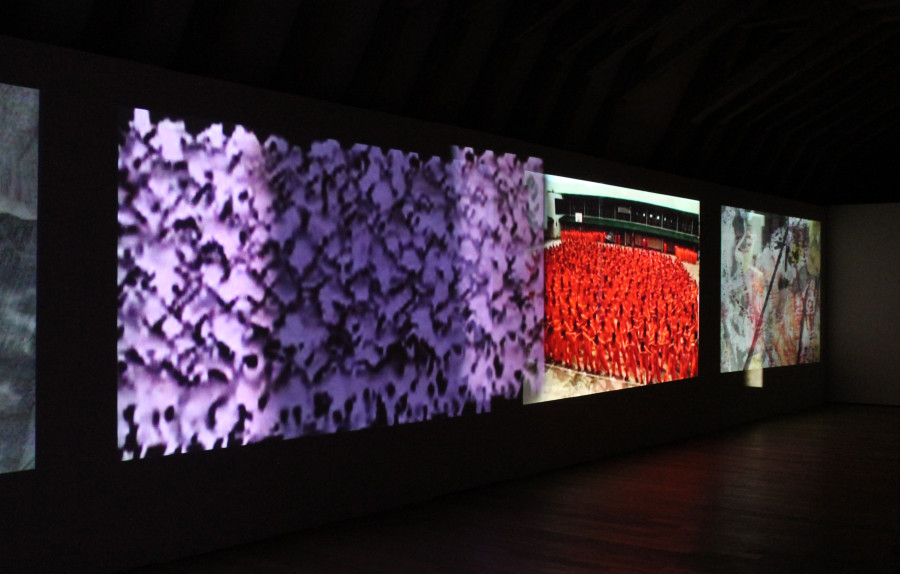 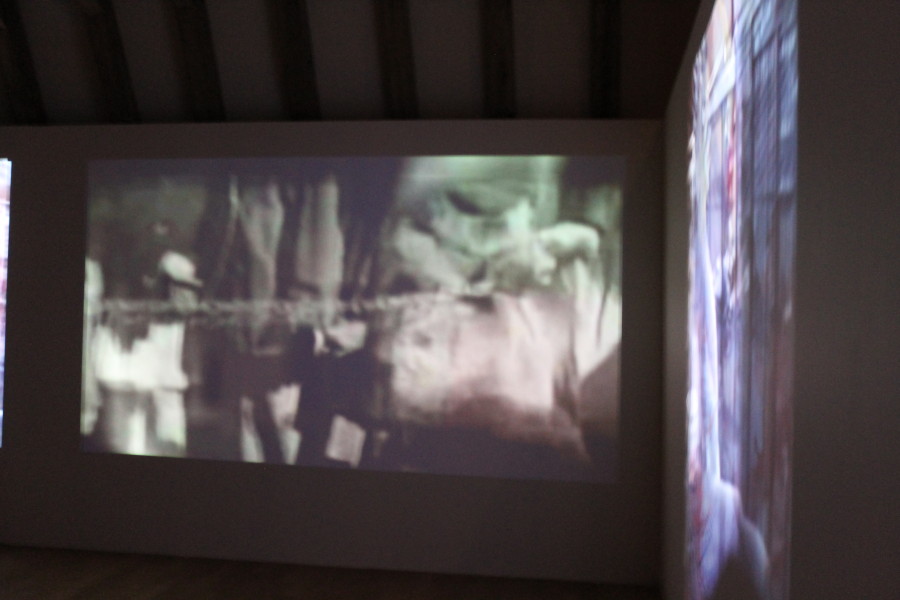 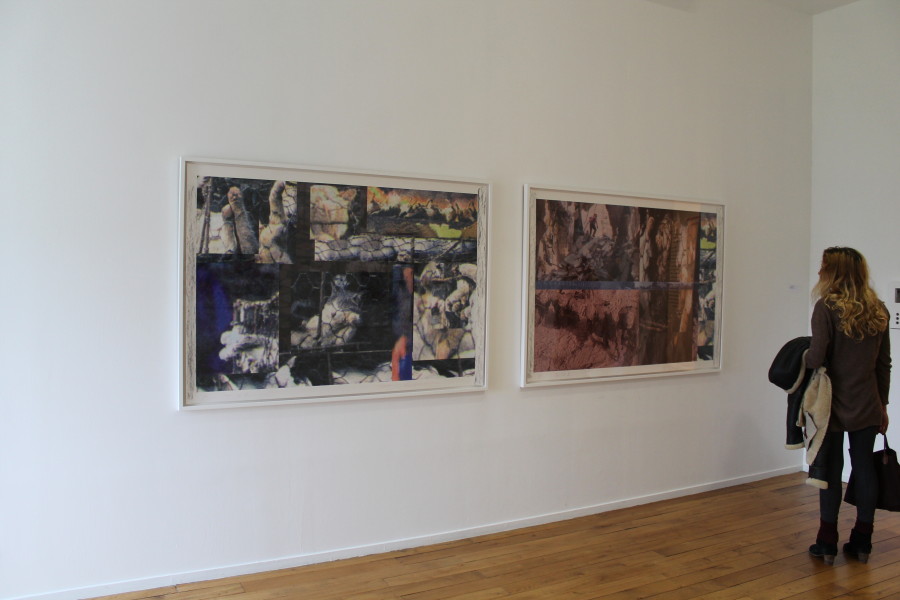