Spain's government is in shambles after an inconclusive election last month. But on Wednesday, the country's politicians seemed more concerned with a 5-month-old boy named Diego.

Diego's mom, Carolina Bescansa, is a member of parliament and the anti-austerity party, Podemos, which campaigned for women's rights and free nurseries. Bescansa, 42, brought Diego into parliament's inaugural session on Wednesday and reportedly breastfed him in an effort to highlight the struggles faced by working mothers.

"In this country, there are millions of mothers who unfortunately cannot raise their children as they would like, who cannot go to work with their children as if it was something normal," Bescansa told reporters, according to The Telegraph. "And I think that the fact that coming to parliament with a breastfed baby makes the news says a lot about this country. That means we need to give more visibility to this."

The gesture caused a stir among conservatives and feminists alike.

After the leader of Podemos, Pablo Iglesias, was photographed cuddling Diego, the acting interior minister, Jorge Fernández Díaz, described it as “lamentable that a child should be used for political motives,” according to The Guardian.

Others, including socialist MP Carme Chacon, called Bescansa's display "unnecessary," while some noted that the Spanish parliament has a nursery on the premises.

The feminist group Red Feminista accused Bescansa of using “maternity as a display element,” according to Newsweek. And the president of the Federation of Progressive Women said the gesture sends a "counterproductive" message that women have to be full-time caregivers, even when they work, El Huffington Post reports.

Podemos defended Bescansa’s move, calling it “a symbolic gesture on behalf of all women who try to strike a balance between work and family and today are unable to do so.”

It's not the first time a European politician has taken her child into parliament.

Licia Ronzulli, a former Italian member of the European Parliament, repeatedly took her daughter into sessions. On Wednesday, Ronzulli retweeted messages of support for Bescansa, including a collage of images of Ronzulli with her daughter. 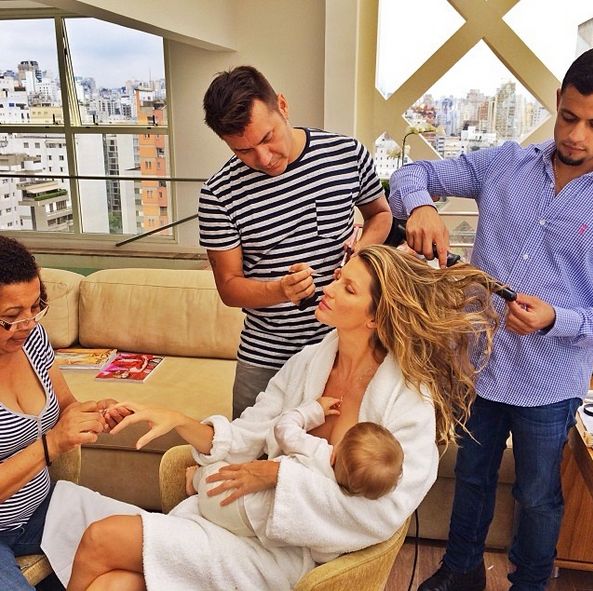 1 / 30
Gisele Bundchen
In 2010, Bundchen <a href="http://www.usmagazine.com/celebrity-moms/news/gisele-bundchen-mandatory-breastfeeding-should-be-a-worldwide-law-201028" target="_blank">declared there should be a "worldwide law"</a> requiring new mothers to breastfeed for six months after they give birth. Many critics were unhappy with her statement, and <a href="http://www.bettyconfidential.com/ar/ld/a/gisele-backtracks-on-breastfeeding-law-comment.html" target="_blank">she eventually clarified by writing on her blog</a>: "My intention in making a comment about the importance of breastfeeding has nothing to do with the law. It comes from my passion and beliefs about children." In 2013, the model Instagrammed a <a href="https://www.huffpost.com/entry/gisele-bundchen-breastfeeding_n_4419988" target="_blank">"multitasking" photo</a> of herself breastfeeding her daughter while having her hair, makeup, and nails done.
Gisele Bundchen/Instagram