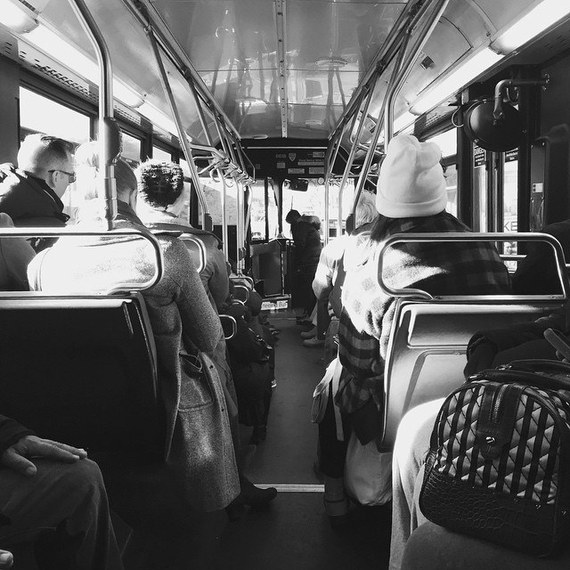 photo by David Bone
When I lived on the Upper West Side, I took the 79th Street crosstown bus to my office on Fifth Avenue. I had many transportation choices, but I favored the M79 particularly because if you took this bus from Columbus Avenue at around eight o'clock in the morning, you'd have the pleasure of riding with a group of young children traveling with their parents or babysitters across Central Park to school.

One such morning, I boarded the bus and there were two children in the front seats that run along the windows in a single strip. These children were sitting backwards in their seats, kneeling actually, with their tummies pressed against the seatbacks while looking out the huge windows. The girl, who was not quite four, squashed her nose against the glass and her brother−not quite five, slapped the window with his palm to the rhythm of Here Comes Peter Cottontail, which they were both singing. I sat in one of the two front row of seats that faced the front of the bus. The bus jerked along, its brakes screeching at short intervals as it inched its way in heavy traffic toward Central Park West, the last stop before the park.

The doors yawned open and in walked another boy. The brother and sister seemed to recognize, if not know, him. There wasn't a seat for the friend, but they scrunched together, as children do, oblivious to the notion of personal space, and like raisins they stuck together and helped each other maintain an upright position as the bus jolted forward without notice. After exchanging some pleasantries the brother and sister resumed their singing, Hopping down the bunny trail, Hippity hoppity Easter's on its way. The sister's mouth was so close to the window her breath made fog spheres on the glass. The brother, who sat in the middle, had both his palms stretched up over his head slapping the window on the downbeat. Perhaps the sister saw the reflection of the friend not singing; she scooched down and stuck her head under her brother's arms to ask the friend, Do you want to sing with us? To this he replied, I can't. I'm Jewish.

The brother halted singing; his glare ricocheted from his friend to his sister. When his eyes landed back on his friend, he looked him over from top to toe, searching for something different. His face was full of concern. The sister asked, For how long have been Jewish? The friend looked up at the ceiling and curled his bottom lip. He thought about this carefully. Then shrugged his shoulders. A long time, he said. Well, we can teach you how to sing, said the brother. I know how to sing, said the friend, I just can't sing that song.

The brother and sister snapped stares at each other, like two magnets drawn together, their eyes wide with wonder. They searched one another for an explanation, a plan. We know lots of songs, said the sister. Can you sing Santa Claus is Coming to Town? The friend closed his eyes and swung his head back and forth like a loose gate in the wind. The brother and sister tipped their heads together to talk it over. The sister whispered, Do Jewish sing Halloween songs? The brother shrugged, You ask him. Instead, she asked the friend, How about Rudolf the Rednosed Reindeer? It's a little sad in the beginning, but has a great ending. Nope, said the friend. Plus it's not even winter, he added.

This deflated the siblings. The brother slapped his thighs. They both exhaled deeply and sat back down on their heels, staring silently out the window. Things had become bleak. Then the friend offered an idea. Do you guys know the Dreidel song? The sister jumped up with such glee her hair bounced all around her face, ringlets springing like slinkies. I know that song! She exclaimed. So did the brother. The friend started them out, Dreidel, dreidel, dreidel. The brother and sister joined in, I made it out of clay. Once again the three children, smushed together as if conjoined, sang at the window−at the top of their lungs. In unison they pumped their fists in the air, And when it's dry and ready, then dreidel I shall play!

Oh, how I wanted to join in with them. I wanted the whole bus to join in. But that only happens in the movies.

And, as it happened, in New York City that day, as we all chimed in and joined the carolers on the M79 crosstown bus singing the Dreidel song on a beautiful Monday morning.