Carolyn Castano explores the narratives of the narco-wars in Latin America, highlighting the female roles in a male-dominated world of violence, politics, drugs and money. Castano's exhibition "El Jardin Femenil Y Otros Ocasos" loosely translates to "the female garden and other dark sunsets (or twilights)".

The metallic collection explores the proximity between woman as reclining goddess and woman as dead weight. Art history overlaps with drug trafficking in that women serve as both passive and beautiful objects for men to exploit.

In the world of drug cartels, women often play mules, trophies, patient wives and eventually victims. Castano's collection depicts nude, dead women buried in dark foliage. The targets are beautiful; in real life they are often models and beauty queens. There is a dark playfulness to her palette, which incorporates rhinestones, glitter and metallic pigments. The morbid subject matter is rendered almost like a Lisa Frank fuzzy coloring poster. The glitter and glamor that characterizes a pretty face translates onto the canvas even after her death. Sick as it may be, she never stops being an object of beauty.

The Los Angeles based artist incorporates a bling factor to her works that recall the rush of new money. Her paintings contain a bit of Rousseau's "Equatorial Jungle", Andy Warhol's pop and memento mori iconography. There is also a psychedelic element to the paintings, drawing a connection between a drug-induced nirvana and a post-mortem one. Whether dead or alive, a reclining nude is a reclining nude, even if she is covered in glitter.

"El Jardin Femenil Y Otros Ocasos" will show at Walter Maciel Gallery until April 7. Check out the works below: 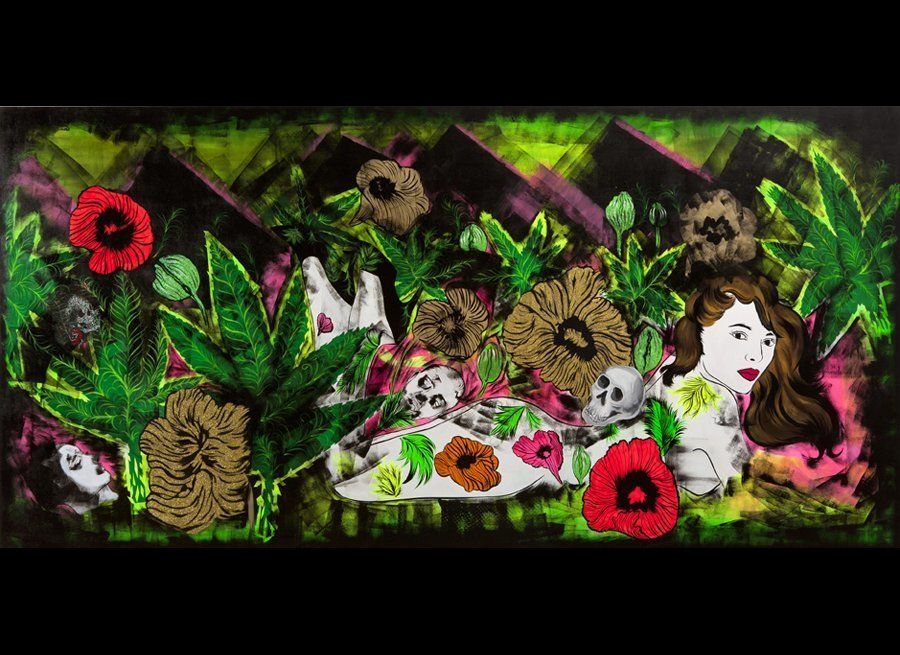