WASHINGTON -- Imagine the gruesomeness of it. Dead bodies cut into from the side. Organs removed, harvested, leaving the remains of something -- someone -- whose corpse no longer resembles a human shape.

This is just one of the stories three Syrian women shared Thursday in a Capitol Hill roundtable hosted by Rep. Carolyn Maloney (D-N.Y.), a longtime women's rights advocate who was undecided about military action in Syria.

The three are part of the Syrian Women's Forum for Peace, an organization formed last year to "advocate for and reinforce a greater role for Syrian women in all sectors of public affairs." They came to Congress to bring another perspective, the often overlooked voices of Syrian women, to the debate over intervention in their country's two-year-old civil war. 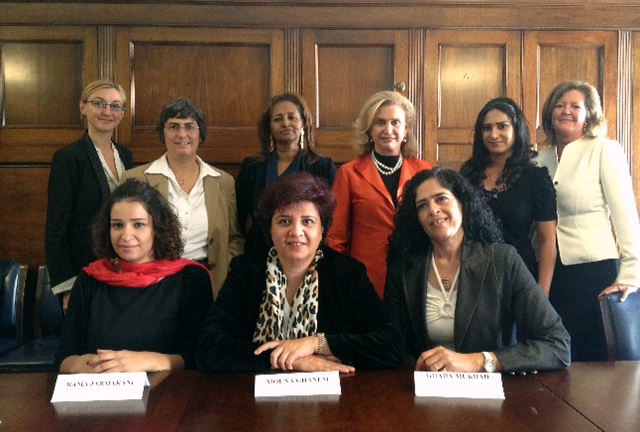 "Without hearing from the Syrian women directly, we are only getting a limited view of the problem and a limited perspective of what needs to be done to bring peace and security to the Middle East," Maloney said. "The forum we held today gave policymakers an opportunity to hear directly from those who live in Syria and face the consequences of any U.S. action."

The women -- Mouna Ghanem, vice president of a Syrian political group; Rama Jarmakani, journalist; and Ghada Mukdad, former candidate for the Syrian Parliament -- spoke to more than 40 congressional staffers for an hour.

They told stories about human rights abuses and the horrific suffering of ordinary people amid the civil war. In particular, they focused on the plight of women. They described sex trafficking on the borders of Syria and inside the refugee camps, rapes, sexual harassment and forced hour-long marriages that essentially amount to prostitution.

And they gave their input politically.

"They made it very clear that they would like a diplomatic solution," Maloney said, summarizing the discussion at a press conference afterward. "That bombing would have made things worse. Not only would there have been collateral damage, but it would just have made unrest throughout the whole Middle East."

According to Maloney, the women said that they hope for a peace settlement led by President Barack Obama. They argued against providing military training or weapons to either side in the civil war and urged women -- not just from Syria and the U.S., but also from Iran, Qatar, Saudi Arabia and Russia -- to play an active role in peace negotiations on Syria.

The meeting on Capitol Hill also led to an action plan: to launch a Syrian-American women's caucus in Congress and to put pressure on the United Nations regarding Resolution 1325, which highlights the need for women to be part of the peace process. The three Syrian women will be meeting with U.N. representatives during their stay in America -- a visit lasting a little under a week -- and Maloney said she would draft a letter calling on the Security Council to hear their voices and to implement Resolution 1325.

Jessica Neuwirth, director of Donor Direct Action, a New York-based women's rights advocacy group that sponsored the visit by the Syrian Women's Forum for Peace, said the roundtable helped to clarify the complexity of the situation in Syria.

"I think a lot of the women who we talked to in Congress had been struggling with a lot of issues," Neuwirth said. "They'd been hearing different things from the constituency, the Syrian-American voice -- which I think may be very different from the Syrian voice in Syria -- and I think they really welcomed an opportunity to talk to and listen and ask questions and exchange."

The women from Syria also found the discussion worthwhile. "I believe this has really made a difference in the way I see the war," Ghanem said. "I was inspired by all this support from women here."

"It's such a dream come true. At least we are here at the Congress and we are speaking for the Syrian woman inside Syria," Mukdad said.

"There is no strike. No violence. No intervention," she added. "There will be political solution for Syria."

But even amidst the positive first steps, the women were careful not to appear too idealistic. They said they want more platforms. They want to speak to President Obama. They want to speak to Russian President Vladimir Putin. And they want the diplomatic process to extend beyond the chemical weapons negotiations, to help resolve the conflict altogether and achieve peace in Syria.

Despite the strong roundtable turnout, The Huffington Post was the only media outlet present at the press conference.

Hibaaq Osman, founder and director of Karama, a Cairo-based regional advocacy group for women that kickstarted the Syrian Women's Forum for Peace, said America needs to do more.

For Mukdad, the U.S.-based representative of the group, the Capitol Hill and U.N. discussions boil down to cautious optimism.