Every Valentine's Day, countless New Yorkers and tourists are trotted around the city by animals that are literally being worked to death. So this February 14, New Yorkers should show carriage horses some love by giving them a badly needed break.

For decades, horses were an integral part of the workforce, helping to build New York into the city it is today. But with the advent of the automobile and other modes of transportation, the need for horses in the city rightly diminished. What was once a natural habitat for them has become a foreign and dangerous one. New York's horses have joined the ranks of the exploited.

Today's carriage horse industry has become one of the most abusive rackets in town, subjecting animals to treacherous work conditions, long hours, and inhumane living situations.

Horses caught in the industry typically work nine-hour days and are forced to maneuver through dense city traffic, sirens, and bright lights -- all while inhaling the fumes of cars, buses, and taxis. After being run into the ground, carriage horses are often auctioned off to "kill-buyers" and transported to Mexico or Canada where they are slaughtered for their meat.

It is no wonder the life expectancy of a carriage horse in New York is immediately cut in half once it is forced to work in the industry. 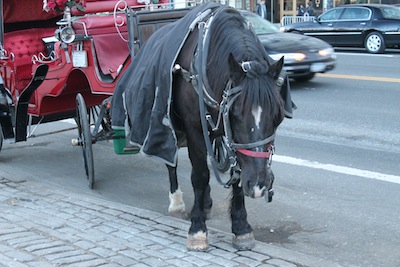 Easily "spooked" by the urban terrain, carriage horses have been involved in at least seven accidents in the last year alone.

Last July, for example, a carriage landed on top of its horse after a taxi slammed into the horse carriage, leaving four people injured. Not long after, a carriage horse with a family on board became spooked by a pedicab, backed onto a sidewalk, and fell to the ground twice.

Pending legislation in the New York City Council, Intro 86A, would help phase out this destructive industry and replace it with a cleaner, safer, and more animal-friendly alternative: a fully electric, turn-of-the-century vintage-replica car. Manufactured locally, this 21st Century "Horseless Carriage" will create jobs and bring a new, sustainable industry to New York City.

Sponsored by Council Member Melissa Mark-Viverito, the legislation has already garnered the support of 15 co-sponsors. Notable celebrities and reality TV stars like Lea Michele and Angela Simmons have thrown their support behind the cause. And prominent animal rights groups like PETA and the Humane Society of America as well as experienced business leaders are backing it.

Most importantly, the American Society for the Prevention of Cruelty to Animals, the entity charged with overseeing and regulating carriage horses in New York City, is backing the effort to phase out the industry. It speaks volumes that the ASPCA, which knows this industry better than anyone, is a strong supporter of Intro 86A.

New Yorkers need to make their voices heard by reaching out to their elected council member to say unequivocally that they want cleaner, safer streets and a new tourist attraction that does not require exploiting vulnerable animals. Residents should call their council member and urge them to sign on as a co-sponsor to Intro 86A.

At the very least, New Yorkers should skip the horse-drawn carriage ride this Valentine's Day and go see a romantic movie, take in a Broadway show, or enjoy a nice meal. Give the horses a day off.

Carly Marie Knudson is the Executive Director of NYCLASS, a 501(c)4 non-profit animal welfare and advocacy organization committed to improving the quality of life for residents and animals of the City of New York.