Carrie Bradshaw made a name for herself as New York City's premiere dating columnist in the pre-smartphone world of HBO's "Sex and the City," chronicling her dates with the likes of everyone from a New York Yankee to a "large-scale light installation" artist. The series depicted most of Bradshaw's love interests developing via happenstance, but according to Candace Bushnell, author of the original Sex and the City book, the 2015 version of Bradshaw would have no qualms looking for love online.

"She'd be a whiz," Bushnell told HuffPost Live's Nancy Redd on Tuesday, when asked how Carrie would adapt to social media. "That character's very outgoing, and I think she would be connecting all over the place, and she'd be writing about, 'Swipe to the right!' and 'Swipe to the left!'"

And while Bradshaw was famous for spending thousands on designer footwear during the financially sound '90s and early 2000s, Bushnell insists her protagonist's signature style would have survived today's financial climate.

"I always felt like Carrie Bradshaw got by on her fabulousness, her fabulousness of her personality," the Killing Monica author explained. "And I just so strongly feel that who you are as a person and your passions, et cetera, ultimately mean so much more than outside things."

"So it's about being fabulous on the inside, and anyone can be fabulous at any time," she continued. "If you have no money, go put a feather boa on your head -- I mean, honestly -- and wear it!" 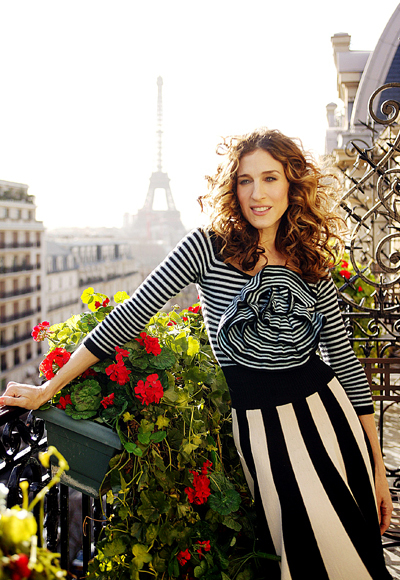 1 / 20
Carrie Bradshaw's Clothes
Season 6: A stylish clash of stripes made this outfit one of Carrie's finest Paris moments.
HBO/Everett Collection