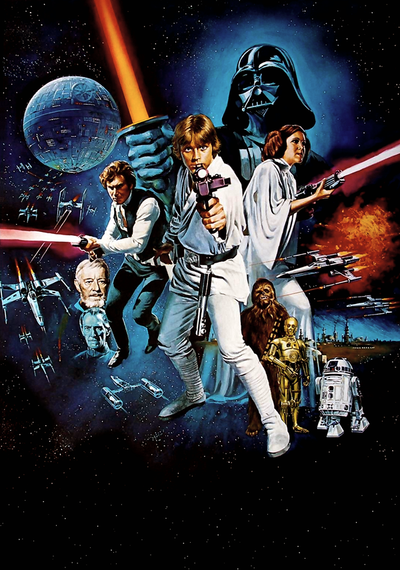 The box office news just keeps on comin'. Having already passed $1 billion in ticket sales faster than any movie in history, Star Wars: The Force Awakens is set to overtake Avatar as the highest grossing film of all time within days.

I watched it a couple of days ago in a movie theater that features seats that vibrate, wobble and rock along with the action onscreen. One youngster was so unnerved by the first jolt that he leapt from his $15 seat and onto his mother's lap.

But I wobbled along merrily throughout, my enjoyment of this current installment enhanced by a memory that none of the other enthralled audience members could share. You see, in 1977 I interviewed the three actors most were waiting to see more than all the rest: Harrison Ford, Carrie Fisher and Mark Hamill.

It was just another last minute assignment at the time. In fact, the first Star Wars had not yet been released when my old Chicago Sun Times pal, the late Roger Ebert left two oversized preview tickets shaped like the Millennium Falcon on my desk. He wanted me to interview the lead actors in his stead. He had other irons in the fire that week -- that, friends, is how totally unfazed we all were at the time.

In fact, the fanciful tickets were, frankly, off putting. More suitable for a children's film, I thought. But Ebert had chosen me because as the resident rock crit I was used to "gang interviews," after years on the road with the top bands of the day. Three actors would, we both thought, be child's play for me.

The three actors I met that fateful day at one of Chicago's toniest hotels were more like raucous rock musicians than any of the other actors I'd previously met. The mayhem was mostly verbal jousting and playful pranks -- no televisions thrown through windows or other more dangerous antics, thankfully.

But all three were clearly determined to have as much fun as possible while they had the chance. They were kids in a candy store, with publicists bowing and scraping and attending to their slightest whims. And their whims were whimsical indeed, each one trying to outdo the other by asking for the silliest room service items imaginable just to see if their wishes would be granted.

They just did not see it coming, all the hoopla that was about to change their lives and film history forever. They were grateful for the experience of shooting such an ambitious film with a genius at the helm. Awed, actually, would be a better word.

But what I remember most vividly was the moment Harrison Ford shrugged, gave me that now-famously wry smile and said, "I mean, it doesn't matter, really. I'm a carpenter. I can always go back to that."

I'd heard lots of celebrities say something similar, usually defensively, to beat me to the "punch." But this man meant what he said. I could see it in his eyes, hear it in his voice. Harrison Ford, who was destined to become one of the biggest stars, ever, was the only celebrity I'd ever met who sincerely did not want to be one.

He knew, in fact, that he was probably happier at that moment than he would ever be again. Stardom, he believed, might put an end to the euphoria. And I wish I still had the Sun Times article to quote him word for word because the way he expressed his feelings stayed with me for years.

In fact, whenever my fast lane life spun out of control I would try to visualize the innate serenity I'd found in the eyes of Harrison Ford that day in 1977. He'd been the wise cracking father figure of the trio, looking on as the other two mugged and quipped incessantly. And I adored all three, and left the hotel hoping their "crazy sci fi flick" would do well, if only so that I could see them again sometime.

Harrison Ford, however, was the one I was sure I would see again. That slightly cynical smile would be irresistible--Hollywood loves people who don't love Hollywood. People who see through what Joni Mitchell called the "star maker machinery," and disarm it with a well-place quip or smirk. So he was doomed from day one.

I told Ebert that very thing as I rushed to make my deadline moments after that interview. I said that I wasn't so sure about Star Wars, but "that Ford dude" was going to be around a while.

Okay, stop laughing. I was half right, anyway.