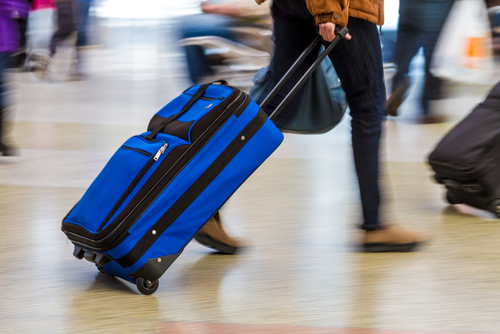 Well it certainly was interesting last week when I posted this about changes to the airlines' carry-on bag policies. I'd never heard from the United and Delta media relations people before (hey, I've only been writing and/or tweeting about air travel for 25 years). But I sure got an earful. And from readers as well. Basically, the response was "nothing has changed in the last five years or since 2008" or whenever.The article pretty much went viral. And a number of television reporters took what I wrote to mean that the airlines had changed one of the "allowed" dimensions (the depth) from 15 down to 14 inches, which is not what I said at all.

Is that nitpicking? Not if a hyper-vigilant employee notices that your bag is sticking out of the sizer by one inch, as has happened to me and many others this year, sending you back to a long check in line and you miss your flight. Not if that $200 or $300 bag you bought last year is now useless because you never, ever check bags. Again, I'm not implying that United's bag sizers have changed. But here's a twist: a United spokesperson informed me that they are installing or have installed new bag sizers that will actually measure 23 x 15 x 10 inches. So that is a change for sure, and good news. Interesting.

Over at American things are also interesting. As I stated in my original article, this all began when I showed up at New York's JFK with my usual carry-on bag which measures 43 linear inches (21 x 15 x 8) and was stopped at TSA because one side stuck out by one inch in the sizer. Back to check in I went and I almost missed my flight as a result because, with so many others who had been sent back, the line took 45 minutes to clear. I was told by the check in agent that the FAA was "cracking down" on AA, so blame them. And, it turns out, that is indeed the reason, as a reliable source told me (it's "merger related"). The same source also implied that this extra scrutiny will just be temporary, but we shall see.

American, too, clearly states on its website that bags must adhere to the 22 x 14 x 9 inch rule. No one dimension must exceed those measurements in any way and the overall dimensions must not exceed 45 linear inches. But back in 2010, as this archived page shows, only for travel within the U.S. are the specific 22 x 14 x 9 inch dimensions mentioned. For travel elsewhere, it just says "45 inches". So that's a change from what the website says today, where there appears to be no distinction between regions.

But wait. Just last week, American sent an email to customers linking to this. There, you'll read, there's no mention of "22 x 14 x 9" at all. But, back to the future, there is a mention of 45 inches! It says, and I quote "Now, when flying on [American or US Airways], you can bring a carry-on bag within 45" combined dimensions (including odd-shaped bags). Personal items must be smaller than the carry-on item. In lieu of a carry-on bag, you may choose to bring on a soft-sided garment bag of up to 51" in size. You also can bring diaper bags and duty-free items, in addition to a carry-on bag and a personal item, on your flight."

This is confusing. Is that a rule change? Or a conflicting rule? Or both?

To be honest, I couldn't find a "rule change" over at Delta, so I shouldn't have lumped them in. However, Delta is clearly cracking down on carry-on sizes. I received a tweet from a disgruntled Delta passenger last week who, coincidentally, has also traveled all around the world with a carry-on bag measuring 21 x 8 x 15 (the exact same dimensions as my bag) and was sent back to pay a $100 checked bag fee on a New York JFK to Birmingham UK flight. So again, it's that one angry inch, even though the bag by any other measure is quite small, and indeed has fewer cubic inches than an "allowed" 22 x 9 x 14 inch bag. That may not be a Delta "rule" change, but it's definitely a change, because I've never heard of a bag that small being rejected as a carry-on, and I've heard it all in the past 25 years writing about airlines and air travel.

And just to be clear, what initially ticked me off was the possibility of missing my flight or having to throw out my previously-acceptable carry-on bag. I'm all for limiting the size of carry-ons. But under the "old" United and American policies, as clearly explained above, many carry-ons would have been welcomed in the cabin. And now they might not be. Oh wait. With United's soon-to-arrive new bag sizers and last week's American Airlines email, maybe they will be.

Airlines Change the Carry on Rules

5 Reasons Why Disney World Is Better Than Ever

Above image via Shutterstock