I was a cartoonist for 15 years before I became a writer. Writing is what I'd actually studied in college, and I spent several years trying to be a writer in the way you were supposed to: sending bad short stories off to literary magazines that didn't pay anything. But then my cartoon was picked up by the local alternative weekly, which didn't pay anything either, and, like most people, I pursued the first thing I got any meager positive reinforcement for. I figured: Okay, I guess I'm a cartoonist.

But, like Dr. Jekyll looking down to see the hairy-knuckled paw of Edward Hyde resting on his knee, I found that prose began creeping insidiously back into my work, in the form of what I facetiously called "artists statements" that accompanied my cartoons. These got longer and more polished and started looking quite a bit like what you'd have to call essays. My books' subtitles went from "Cartoons by Tim Kreider" to "Cartoons and Essays," until finally I quit my slumming and said, Okay, fine: I'm a writer.

It was my editor at Free Press who encouraged me to include some cartoons in my forthcoming essay collection, We Learn Nothing [Free Press, $20.00]. I worried that they were dissonant with the tone of the rest of the book, having been drawn by a former self whom I now think of as a sort of unhappily hilarious, drunken younger brother. I was concerned that they might prevent me from being taken seriously as a writer. So far the most respected writer/cartoonist in American history has been James Thurber, who's generally considered a "humorist," which, on the scale of professional prestige, is to "writer" what "cartoonist" is to "artist."

But the editorial thinking at my publishing house was: It can't hurt, and since I was, for a change, being paid, I acquiesced. I reassured myself that many great and well-regarded artists, from Updike to Fellini, started out as cartoonists. People like looking at pictures. Dickens's and Twain's work was originally illustrated. Even the Bible was illuminated! So please do not let the inclusion of drawings of me fellating myself with a Kermit the Frog hand puppet prevent you from taking this book any less seriously than the work of Joseph Conrad or Cormac McCarthy. I await the judgment of literary history.

PHOTO GALLERY
We Learn Nothing
Download
Calling all HuffPost superfans!
Sign up for membership to become a founding member and help shape HuffPost's next chapter
Join HuffPost

Cartoonist Essays: Why I Illustrated My Own Book (PHOTOS)
We Learn Nothing 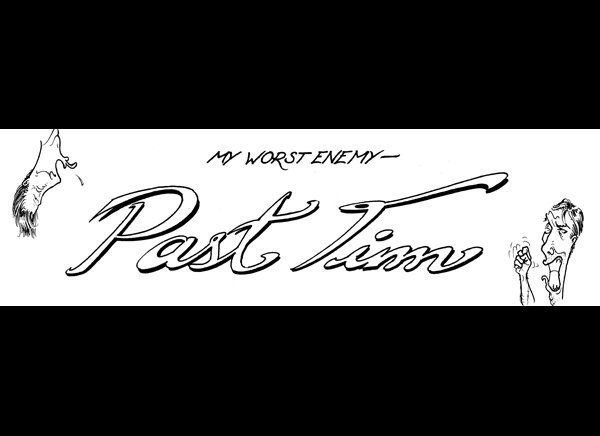 1 / 20
My Worst Enemy--Past Tim
This cartoon accompanies an essay on drinking, but it might just as well have accompanied any number of other essays in this book. In my own experience, real life is not rife with epiphanies, although they seem to be an obligatory convention of the literary essay. Most of my own essays are inquiries rather than arguments, and the questions they set out to answer often prove unanswerable or irrelevant; what matters, it turns out, is what Rilke called "living the questions." An alternate theory is that I am an idiot who learns nothing from any experience at all.