About a month back, Trey Parker and Matt Stone did an episode of South Park called "201," in which their superhero team of religious icons, including Islam's Prophet Muhammad, saves the day and Cartman gives a speech about tolerance.

In response to the depiction of Muhammad, a group of wannabe terrorists called up Comedy Central and issued a death threat, prompting Comedy Central to censor both the prophet's picture and Cartman's speech. This is all very well known.

Also well known is the fact that an obscure cartoonist named Molly Norris decided to protest the death threats by drawing her own cute cartoon of Muhammad and proclaiming May 20 "Everybody Draw Mohammed Day," which is the correct way to respond to this kind of intimidation.

It's called nonviolent action. It's the thing that got Mahatma Gandhi and Martin Luther King, Jr. into the annals of history. (Granted, it also got them shot to death, but more on that later.) They were brave and heroic.

Pakistan banned both Facebook and Youtube over Everybody Draw Mohammed Day. That made headlines, too. Why? Because to Pakistan, these sites violated Islamic law by giving voice to users promoting the depiction of Muhammad.

Molly Norris is neither brave nor heroic. She eventually apologized to the extremists, who had sent her a few death threats, and renounced the movement she started as it snowball into something huge. And what's worse, Norris pretty much said the terrorists were right. To quote her website:

I did not 'declare' an "Everybody Draw Mohammed Day."

I made a cartoon of a satirical poster with a fake group behind it (Citizens Against Citizens Against Humor). It was solely a concept about Comedy Central's over reaction to a threat from revolutionmuslim.com, and their consequent decision to censor the television show South Park.

My cartoon was taken seriously & hijacked by people who used it to make facebook pages.

Satirical poster? Lady, you don't know shit about satire. Satire is a form of (nonviolent) violence, and political cartooning is supposed to be offensive. Take a look at any book of political cartoons from anywhere in the world. Most of it is really nasty stuff. Mean, ugly, and vile (and I don't mean just the stuff by poor draftspeople), which is what good humor is. There is no such thing as "gentle satire."

Look at Ann Telanaes. She's a former Disney animator who's been doing political cartoons for years, and her attacks on Islam have been pretty savage. Look at this one called "Miss Sharia." It isn't nice, but it's brilliant: 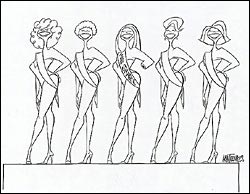 Which is why the PLO killed Naji Salim al-Ali, a Palestinian cartoonist living in London back in 1987. He started criticizing them. He offended them. So they killed him.

What Molly Norris initially did was the right way to address the problem: fight terrorism with humor, intelligence, and panache. The response was threats of murder. She backed down and apologized to her oppressors. I guess she didn't want to end up like Gandhi.

(Images used as fair use.)