Once upon a time, a father asked his two daughters what kind of a story they wanted. One said she wanted a story about a princess and the other wanted a story about a bride. That father was Oscar-winning screenwriter William Goldman, and so he wrote a story about a princess bride, a gallant hero, a six-fingered swordsman, Rodents of Unusual Size, the Dread Pirate Roberts, a giant, a deadly poison, and an adorable old couple with a magic potion and kindly good wishes about storming the castle. It had adventure, it had humor, it had true love, and some of the most quotable dialog ever written.

The Princess Bride became a book and then a movie, directed by Rob Reiner and starring Cary Elwes, Robin Wright, Mandy Patinkin, and Wallace Shawn, and with a gorgeous soundtrack by Mark Knopfler. Elwes has written a book As You Wish: Inconceivable Tales from the Making of The Princess Bride, coming out next month, filled with inside stories about the making of the film. 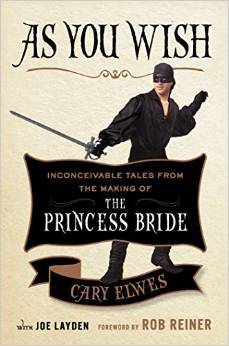 In an interview, Elwes explained that he was in Berlin when he found out he would be auditioning for Reiner, to play what would be his first lead role.

I was shooting a little independent film called Maschenka, loosely based on a autobiography of Nabokov, and I got a call from my agent saying that Rob Reiner and his producing partner Andy Scheinman wanted to fly to Berlin to meet me to discuss The Princess Bride. I knew the book. I'd read it as a kid, so I was very excited but I'm terrible at auditioning. I'm just terrible. I always feel like it's very strange for me to do reading in auditions because I'm much more comfortable than some of the actors on the set and in the location in the moment but not good just sitting in a room trying to read to get the part. The casting director had seen me in Lady Jane, so Rob watched it and he said he thought I had the right look but didn't know if I had the comic timing.

I spent a lot of my childhood in America because I have an American stepfather and so I knew a lot about Rob already. I'd seen a lot of American television, so we chatted about SNL and All In The Family and all kinds of stuff before we got around to reading a scene from the movie. And so when he asked me to read my heart sank, I thought, "That's it. I will never get the part." But somehow after I finished reading the conversation came back around to sitcoms and somehow Bill Cosby came up and I don't know why but I found myself doing a Fat Albert impersonation. According to Rob that sealed the deal for him. I said "Hey, hey, hey." He loved it, so that was that. So thank you to Bill Cosby.

He talked about the challenge of playing a straightforward, true-hearted good guy in the midst of so many colorful characters.

He's a hero. I wanted to play him as a swashbuckling hero, kind of like a superhero. I watched all the Errol Flynn and Douglas Fairbanks movies. Obviously his costume was very loosely based on Zorro and I really did a lot of research to get that whole classic Hollywood swash-buckling pirate vibe to him. It's all there in the script. That's the thing that Rob told me, he said, "Look, it's all there, you don't have to play out anything. You don't have to tip anything, it's all there in the script." So that actually made it easy. We came up with some comedy together like the whole thing with my floppy head when I wake up from being dead, I came up with that and Rob loved it. So we added some physical comedy and that was it.

He especially enjoyed hearing stories from the other members of the cast when he interviewed them for the book.

Mandy [Patinkin] recounted a story that I had completely forgotten when we were shooting the fight sequence on the top of the Cliffs of Insanity. There's a bit of a sequence that wasn't working for the camera. And Rob said, "We can't see it. You guys have it faced the wrong way."

They were working with legendary fencing coach Bob Anderson, who worked with everyone from Errol Flynn to Darth Vader.

Mandy said to Bob Anderson, 'We've got to change it," and Bob said, "We can't. We're shooting," and Rob said, "You've got 20 minutes. If you can fix it, great! If you can't, we're moving on." And in twenty minutes we actually re-choreographed part of the fight right there on the set and got it, and did it. It was nice to remember that we could actually come up with something on the spur of the moment and fix it.

The book includes the story of Elwes' most outrageous request from a fan. A young woman had Westley's line "As you wish" tattooed on the back of her neck. She asked him to add his name underneath so she could get it tattooed as well. After checking with her mother, he signed.

As Elwes prepares to take on the role of director for the first time, he remembers the most important thing he learned from Rob Reiner. "It's a completely collaborative medium and the director sets the tone. Rob is very easy-going and being an actor I think really helps because he was able to talk to all of us in the way that some directors who haven't acted can't. That was the key; he made it fun. And I think that translates onto the screen. Everyone was focused but it was fun."

The film was not an immediate success but it is now an acknowledged classic that families share the way the grandfather played by Peter Falk in the film shares his favorite story with his grandson played by Fred Savage. Elwes says he thinks it is "because it was made with a lot of heart. And Bill Goldman wrote this book for his two daughters. So I think it's also the fact that the genesis of the project was out of love. It's about defending and fighting for love and you can't go wrong with that."