Herbs and plants from the botanic garden often infuse the high Mexican cuisine at Casa Velas, an all inclusive resort in Puerto Vallarta on the Pacific coast of Mexico. 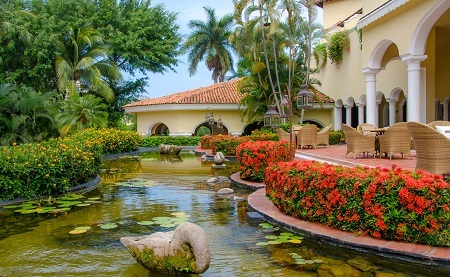 "We get many spices from our own beds," said one of the chefs. "Especially cilantro, which is so popular in Mexico. "

During our stay we could taste the subtle flavors of cilantro in our grilled portabella mushrooms and shrimp, our marinated salmon with pineapple puree, and in the salsas, salad dressings, and sauces we had at almost every meal. Small chunks of sweet cactus, called nopales in Spanish, and rich in antioxidants, enhanced omelets, fish sauces, and chili con carne. Margaritas, too, were chocked full of cilantro.

In the formal garden, we stood along the scalloped walkways lined with aloe vera, often used in spa treatments, and agave, the pointed cactus used to make tequila.

"This area is a frequent choice for weddings," said Chief Concierge Denisse Ortiz. "The tall hedge at the end of the formal garden makes a good backdrop for pictures." 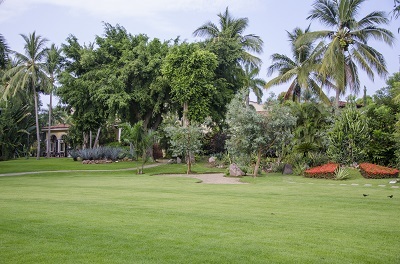 The Formal Botanic Garden, Often the Scene for Weddings

However, great photo ops are everywhere in the midst of lush, colorful plants, palm trees, and bushes. Red Izora and yellow Cassandra flowers burst through the hedges. Foot wide white water lilies rest flat on top of ponds. Rhododendrons, palms and other tropical trees hug the three story neocolonial buildings at Casa Velas. At the center of the property an enormous scalloped swimming pool is surrounded by a thicket of high trees. Paths lead downward to Emiliano's Restaurant. When we ate our meals, we not only heard the sounds of birds, but had a panoramic view of the complex flora and fauna leading to the spa and golf course. 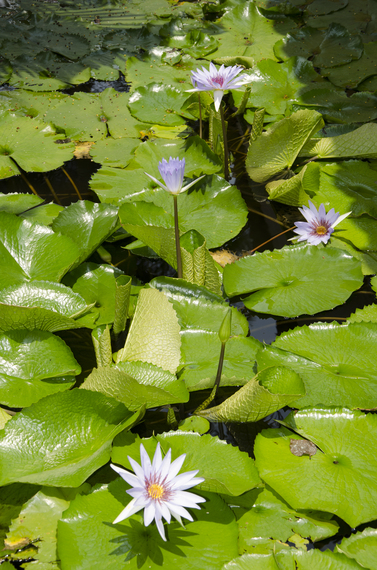 One of the Many Lily Ponds

After we'd been there a day or two, I walked behind the formal botanic garden to the "working garden" the chef uses for his Mexican high cuisine. Long beds of peppermint, basil, hibiscus, dill, thyme, rosemary, cilantro, epazade (called episoil by current Aztecs), and even raspberries were spread over a large area. 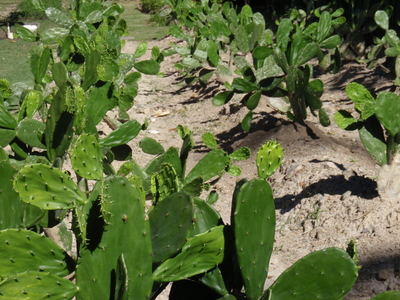 "Look quickly. There's an iguana up in the tree," said my husband as we were finishing breakfast.

I took my camera out, arranged the zoom, and got a shot of a long pudgy one resting on a high branch. When he crawled down and began scampering into the pool area, I saw how cute he was with his huge unwieldy belly juggling from side to side, and his tiny but strong legs holding him up. I kept snapping pictures until he slithered under one of the lounge chairs and disappeared into the thicket of flowers and bushes around the spa. Note: iguanas don't go after humans, unless, as a local told me, "You stick your hand in its mouth."

"Care for a drink?" asked the bartender, a jovial guy with a bandana tied on the back of his head. "We also have food available from the kitchen." I told him I'd be back at the thatched roof bar for some of that delicious hibiscus juice when I finished a round of powerwalking in the water. Other guests were seated on a tiled table, their bodies half immersed, dipping chips into a huge bowl of guacamole, and commenting on the graceful peacock who was strutting by, his extra long turquoise and black feathers gliding over the side of the pool. Later, as I was curled up under an umbrella in one of the comfy chaise lounges, the bartender walked around the pool to see if any of us needed refills. 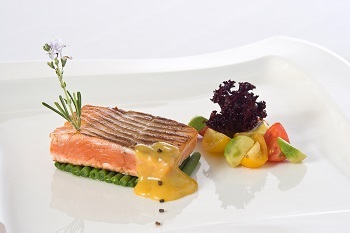 About 50 years ago, the movie Night of the Iguana, starring Richard Burton and Elizabeth Taylor, put Puerto Vallarta on the map. Though the filming was done in the nearby village of Mismaloya, the stars stayed in Puerto Vallarta, then a fishing village, and later bought separate houses on the hill above the town cathedral. The architecture of Casa Velas is somewhat reminiscent of the houses in the film, and the arched walkways over ponds are similar in style to the "love bridge" that Burton and Taylor had built between their two houses.

Now at home it's hard to adjust to the cold winter temperatures. Also, I can't seem to replicate the recipes on the menu. It's time to return to Casa Velas.