You've probably heard of that psychology study that found that children are more likely to go for one marshmallow now than the promise of two marshmallows later. Researchers at UC Davis have found that car buyers are no different and are more likely to buy the car that comes with an offer of an immediate discount -- like a rebate accessible within several weeks -- than one that comes with a tax credit available several months later, even if the longer-term reward is of higher value.

This week Gov. Dannel Malloy of Connecticut wisely announced a new electric car rebate program that gives a more immediate discount than any other state has provided to date; you get the rebate right at the dealership, whether you're leasing or buying the car. In the car-selling world, they call that "cash on the hood of the car." 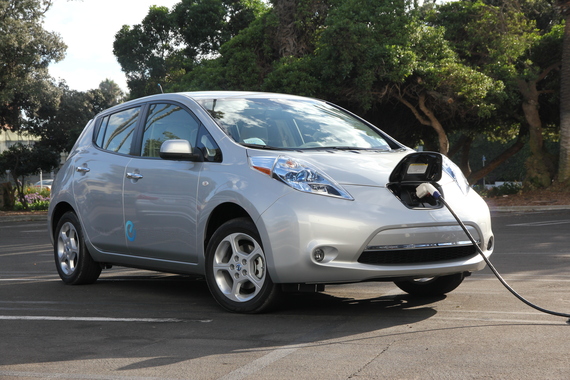 Though plug-in electric vehicles (EVs) are cheaper to fuel and maintain than conventional cars, they tend to have higher upfront costs. EVs are much lower in carbon emissions than conventional cars, even factoring in the emissions from the electricity used to charge them. That's why we need consumer incentives for EVs to bring the cost down and accelerate consumer interest.

California, Massachusetts, and Pennsylvania offer EV rebate programs of $1,500 to $2,500, and Colorado offers a tax credit of up to $6,000. These are all on top of the up-to-$7,500 federal tax credit on plug-in cars. But for all these rebates and credits, consumers must wait several weeks or up to several months for their money. In Connecticut the state payback is immediate. For plug-in vehicles with small batteries, it's $750 off the base price of the car; for those with medium-sized batteries, it's $1,500; and for those with large batteries, it's $3,000. That's real money!

Another unique aspect of the Connecticut program is that it's available not just for individual consumers but also for businesses, nonprofits, and municipalities. And the rebates will stretch a little further because high-end cars like the Tesla won't qualify for this discount. Additionally, the dealer gets a small commission in exchange for a bit of extra paperwork during the deal.

The initial program is only funded at $1 million (not using taxpayer dollars, I might add), which will likely run out in the next several months. That's why we need longer-term resources for this program (and those in other states). Connecticut is part of an eight-state collaborative to get 10 million zero-emission vehicles on the road by 2025 as one important way to slash dangerous air pollution. We have long road to travel to get there, so rebates like this one need a longer shelf life to jumpstart consumer interest in these cars, which happen to be really fun to drive. Sierra Club is part of the Connecticut Electric Vehicle Coalition that will continue to educate the public and policymakers about the benefits of switching to EVs.

Georgia and Illinois recently ditched their EV discount programs. This means we need more forward-thinking policymakers like Malloy to step up and help accelerate this market. When announcing this program, Malloy said that "new technologies -- such as EVs -- can help us build a healthy economy, create jobs, and address the energy and environmental challenges we face. These new CHEAPR rebates will provide an added incentive for consumers to embrace new approaches and help lead the way to a more sustainable future."