The oasis city of Palmyra has been seized. What if Damascus were to fall? In my head I go back over the numbers I have recently come to know so well: half of the population of Syria forced to flee their homes due to the war, 7.5 million Syrians internally displaced, a further 3.9 million Syrian refugees, 630,000 of them in Jordan alone. Yet with outrage and incredulity we must revise and re-tally these already impossible totals as the conflict continues to mire and ravage.

Last weekend I took my 12 year-old daughter to see Avengers: Age of Ultron. I paid nearly $60 for tickets, popcorn and drinks -- with my wife and son it would have cost $120. $120 for a couple of hours of 3D superhero mayhem. About the price of a pair of trainers.

But for a family of Syrian refugees in Jordan? That is the difference between having a home and living on the streets, between your children going to school and having to send them out to work, between just about coping and holding the family together, and having to resort to dangerous survival strategies like early marriage and prostitution. Some even returning to Syria. Can we be surprised that sometimes the knock-on effect of such high risk decisions leads to the even higher risk one that some Syrian families are forced to make, to undertake the treacherous journey across the Mediterranean to seek safety in Europe?

A few days before I took my daughter to the movies, I sat with Syrian refugee Hassan, the 75-year-old patriarch of a family of 15. Two years ago Hassan and his clan uncoiled themselves from their roots in Syria, and moved to the basement of a dilapidated building in a Jordanian city. Like 85 per cent of Syrian refugees in Jordan, Hassan's family chose to live in an urban environment, rather than the artificial and unfamiliar setting of a camp, despite the services provided in camps and the fact that urban life for refugees can often prove an enormously daunting task.

UNHCR, The UN Refugee Agency, estimates that two-thirds of Syrian non-camp refugees live below Jordan's poverty line, one out of six below the abject poverty line. Hassan, a spirited man, told me his family savings had long evaporated. Like the overwhelming majority of Syrians in Jordan he has no work permit thus little income with which to pay rent, by far the biggest expense for refugees in Jordan.

I asked how the family survived and Hassan pointed to his daughter-in-law, Fatima, a mother of eight, whose husband -- Hassan's eldest son -- was detained in Syria four years ago and has disappeared.

Ironically, Fatima's loss is also the family's lifeline, because it has qualified her for UNHCR's cash assistance program, which targets the most vulnerable Syrian refugees living in Jordanian cities. Fatima receives a monthly payment of 120 Jordanian Dinars ($170) that the family uses to help pay rent and buy food and school supplies for the children. Fatima's is one of 21,000 Syrian families who would very likely to be homeless were it not for this innovative and highly effective program.

The question of cash vs in-kind donation is an old debate in the humanitarian world. A donor's impulse to send shoes or blankets is understandable but the reality is all items are a representation of monetary value. Items have a price tag and they often get sold in order to serve a priority need. Cash gives refugees freedom of choice to make decisions that best meet their families' specific needs. It restores a sense of dignity.

It is also a much speedier method of assistance. Items have to be shipped, received, warehoused, and distributed through special centres, a process that can take weeks or even months. Cash reaches the beneficiary in a matter of days, if not hours. And there is an obvious cost saving in avoiding that process too. In Jordan, out of every $100 that UNHCR receives, $98 is delivered directly to the families who need it. That is almost impossible to achieve with in-kind assistance. And in Jordan, the cash program is fraud free, as it uses iris scanning biometric technology, ensuring that only the intended recipient can receive the cash. No ATM card, no PIN.

And at a time when there is great strain on Jordanian services, infrastructure and society due to the Syrian refugee influx, cash helps the local economy and enables refugees to better integrate. There is less stigma attached to it -- no queuing at public distribution centres, no vouchers in supermarkets.

I asked Hassan how his family would cope without the cash assistance. He smiled, then sighed, as if from a deep well of weariness, "Well, God is here" he said.

That was answer enough for me.

For more on my visit to Jordan with UNHCR please visit: www.unhcr.org/khaledhosseini 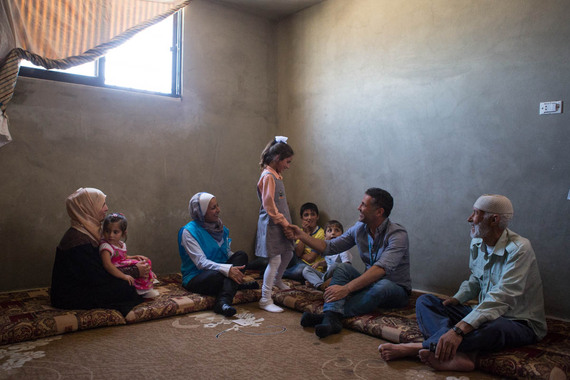 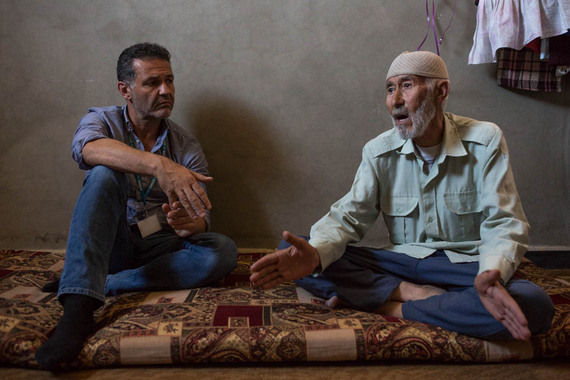