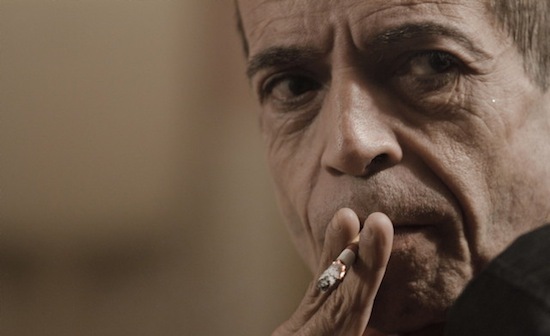 There is one particular person responsible for my love of Brazilian cinema. While I sit and watch movies, day after day, never tiring of it, I've discovered it's way more fun to bring other viewers along on the exceptional journey I've been allowed to embark on, learning through the masterpieces I've been lucky enough to experience how to navigate the world with more humanity. And meeting filmmakers up close who explain, through their very presence, the meaning of life.

Life as that necessary cycle of sadness, happiness, success and disappointment, with some really memorable moments that make up for the mundane.

It's no surprise that Sandro Fiorin of FiGa Films has sent this latest masterpiece, Castanha my way. It is just one in a series of very perfect accidents in the great wheel of daily joy that is movie watching for me. The film just happens to be in NYC at this time, enjoying its North American premiere at the Film Society of Lincoln Center, part of their Art of the Real 2014 series.

Brazilian cinema for me always possesses a dream-like quality that is punctuated by the grittiness of everyday life. Castanha is no exception, but it does add another layer to the puzzle. Because the film is a narrative about a real character, João Carlos Castanha, his real mother Celina and their daily life -- but it's not a documentary.

Palestinian filmmaker Hany Abu-Assad has said about some of his more real-to-life films (like the controversial Ford Transit) that they are "100 percent reality and 100 percent fiction" and this can also be the perfect way to describe director Davi Pretto's first feature length film. While inspired by the life of 52-year-old actor-slash-cross-dressing-erotic-club-hostess Castanha, the film reinterprets some events from his life and blends them perhaps with those moments we've all dreamed about secretly, the perfect shots from our cinematic, private lives. Castanha himself is divinely charismatic, a perfect aging rockstar who is haunted by his own demons: the loss of the love of his life to AIDS and the need to be there for his single mother, as her only son.

Pretto admits that his desire to make the film came out of working with Castanha since film school, and explains further "I can still recall my fascination for his face, traits, expressions and his piercing gaze when acting." Then concludes, "from that came the urge to make a film for that face. An actor piece." And that Castanha is, through and through, because we as the audience never truly find out where fiction ends and reality begins. It's a wonderfully tantalizing formula that works perfectly in this case, with a subject worthy of all his close-ups and a filmmaker who dares to blur the lines, without apologies.

Through Castanha, Pretto also says, "I strengthen my position on cinema -- that it is about encounters between people. Between those with a story to be told and those who want to tell stories." The magical world of cinema is an active meeting of great minds, those of the filmmakers but also of the audience. Without one there is no other and each side must always be aware of that, to remove the strange distance we sometimes feel from the artists. With Pretto's film, I felt like I was on a journey along with Castanha, an extraordinary man with many ordinary moments and a life like mine in its successes but also its many failures. When a film does that deeply, it's a triumph.

I'll let Pretto's words sum it all up best: "I believe the film ends up as a realistic portrayal of this character. After all, my only idea since the beginning was to be coherent with what João lives and breaths as art and life. And if one word can sum him up, it is freedom." Freedom.