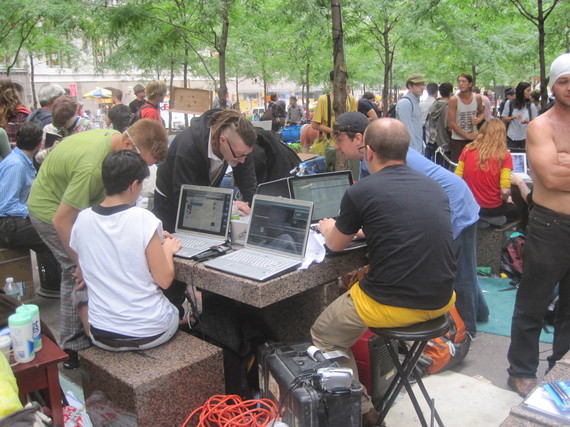 Imagine, if five years after penning the declaration of Independence the original signers were to meet back in Philadelphia to recreate that moment? Or, authentic members of Boston's Tea Party were to re-convene and make themselves available to historians and reporters five years later? Would anyone want to be there? Listen in? Take careful notes? Snap some pictures?

Occupy Wall Street, which history will prove to have been the pivotal point sharply redefining our nation's obsequious acceptance of Government/Corporate collusion, will be providing exactly that opportunity Zuccotti Park on Saturday, September 17 in NYC - Occupy's Fifth Birthday.

One of the highlights of a day in which scores of activist groups of all sorts will be there to once again let their grievances (and solutions) be known are efforts by one contingent to re-create the Zuccotti experience. Their plans call for OWS veterans to return to the park that day to appear at the same locations, booths, tents public areas to recreate that experience and to be there to answer questions and share their stories.

What are we talking about?

We are talking about an opportunity for today's historians and journalists to hear the oral history of the Occupy experience first-hand. On display will be some of the original, hand-lettered posters (now collector's items), booth mock-ups, a few instances of people making use of the famous "public megaphones" - and perhaps a recreation of the boisterous "drum circle" that so annoyed the commercial neighbors and so energized the Zuccotti inhabitants.

Who are we talking about?

Sponsors and media outreach people are mum on this, and the word is that some people showing up will be a "surprise" to even the occupiers. Whoever shows, the intention is to create authenticity and inclusion and provide a cross-section of that original population. As example:

Sue DeGregorio Rosen. A 35+ veteran nurse advocate for the freedom to medicate with Cannabis, wife/mother/grandmother will be there.

Prior to Occupy, Sue had carefully watched the earlier movements and marches in Spain. At the time that Occupy broke, she was working for the NY State Nurses association on Wall Street and in her trips in from her home in New Jersey would often cut across Zuccotti Park to get to their offices.

From September 17 forward, she visited the Park almost daily with camera in hand to record the evolving, sometimes chaotic scene.

"I spoke with others, like-minded people, regular people," she says. "We talked about healthcare, about how and why we were there and what we wanted. Today, I remain 'Occupy' even in the work I do with and for the American Cannabis Nurses Association."

Manny Cavaco (aka Manny Manhattan). Occupy didn't initially register with Manny, but when he heard that some trade unionists would be there on October 6, it caught his attention and he headed there that day.

"I thought it would be a half-dozen people, and it turned out to be wall-to-wall," he mused. From that point on, he was a Zuccotti regular who manned the Trade Unionist table (next to the Anarchist table and across from the library) and could be seen carrying a signs with Teamster quotes and one photo which became Internet buzz: Greed is NOT good!

Five years forward, he is running for Assembly in AD 65 and on the November 8 ticket as a member of the Green Party. He has incorporated Occupy into his campaign - especially that of supporting the creation of a New York State Public Bank and worker co-ops.

Michael Pellagatti. Going by the handle Pella Libertas, Michael has turned the taunt made by tourists to Occupiers to "Get a Job" completely around - now employed full time as a Gray Line tour guide and independently as "Occupy The Tour."

"Pella" was employed nights at that time as a security guard for a securities firm in the Wall Street area and, as an early-on activist, had gotten wind of the proposed attempt to occupy Wall Street. He showed up there that morning to find Wall Street guarded and empty.

"But then," he remembers, "I heard the drums. And where there are drums, there is a protest" and followed the noise to Zuccotti Park. He figured it would fizzle out in a few days, and when it didn't he was "all in" and spent his days in the Media Tent.

Fully (but unofficially) deputized as the tour guide for S17 (he disputes the term - calling himself more correctly as a "Radical Docent"), you will find him escorting historians and journalists around the park to make sure they get their facts straight.

So, that's a taste of the line-up. If the attitude of the NYC Boys in Blue today is no different than it was five years ago - they just might appear in a police line-up. Let's hope that the barriers are down and that mutual respect is shown.

If they are nice, perhaps the Occupy Kitchen will give them slices of the birthday celebration cake.