As a former history major with a passion for all things British and only a week available for travel, Edinburgh seemed an ideal destination. The city itself is chock-full of sites and sights. Add to that the 15 or so castles in the surrounding area, and you have a vacation tailor-made for admiring the present and investigating the past. 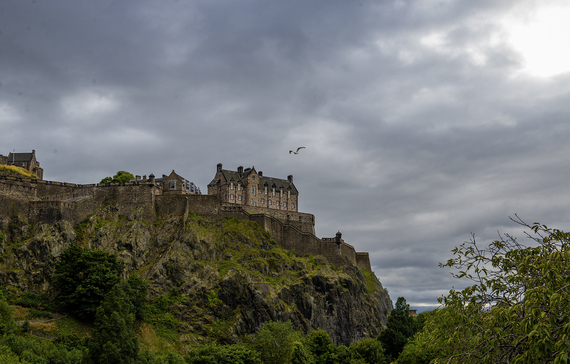 Preferring a leisurely approach to travel that allows us to "experience" a locale rather than just rush from one place to another, our biggest challenge was narrowing down our list of "must sees." Having already had the good fortune to tour Edinburgh Castle and the Palace of Holyroodhouse, probably the two biggest tourist sites in Edinburgh, we struck them off our list. 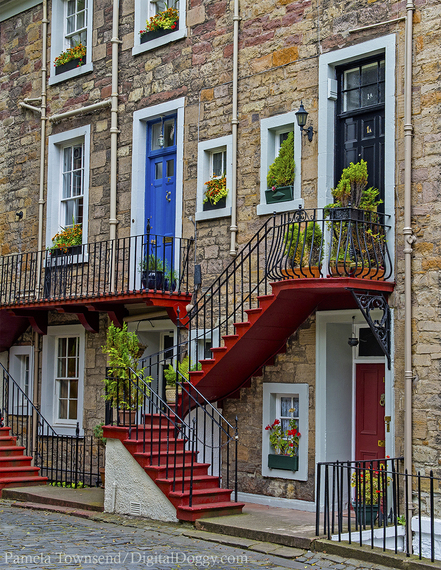 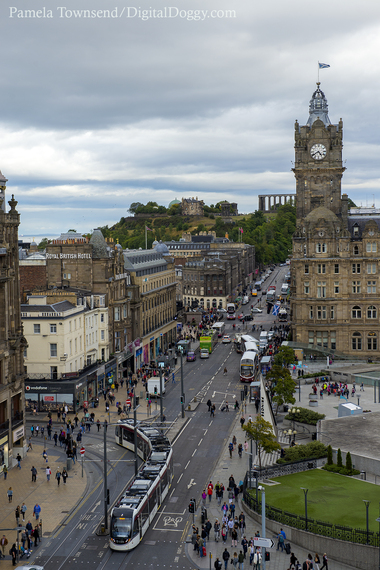 And although our focus was on castles, we did want to allow some time for exploring other aspects of the city. We strolled the Royal Mile, the shop-lined road linking Edinburgh Castle and Holyroodhouse; took a guided tour of Mary King's Close, a narrow, medieval street now covered by more modern buildings; wandered along the Water of Leith in the city's quaint Dean Village; and sampled craft beers in off-the-beaten-path pubs. 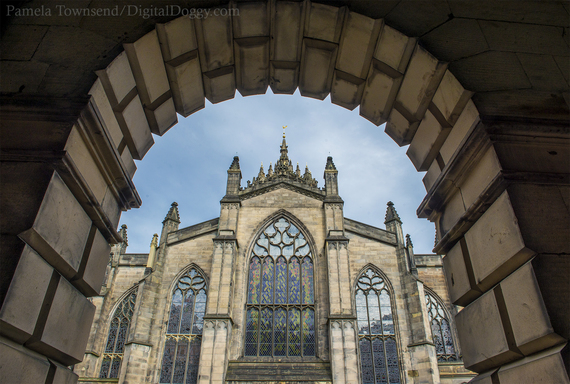 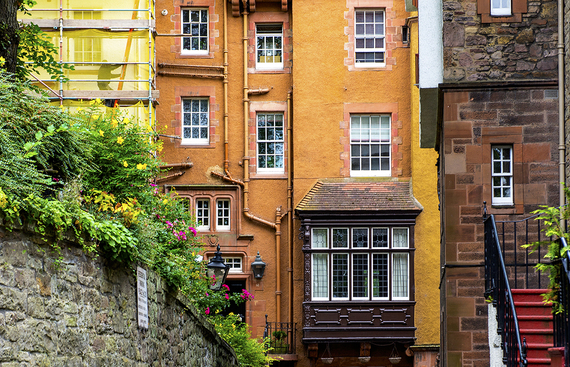 Then it was on to the castles!

Our first stop was Craigmillar Castle, something of a hidden gem nestled in parkland on the fringe of Edinburgh. Although it took just 15 minutes or so by bus from Princes Street, this 14th century semi-ruined edifice seemed worlds away from the hustle and bustle of the Royal Mile. 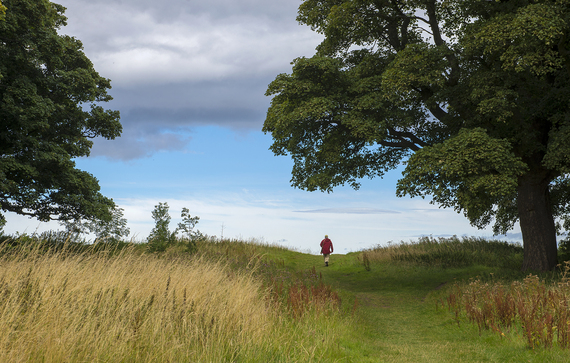 Accessed via a modest gate on the side of the road, the castle was invisible from the bus stop. We walked up a path though fields of waving grass, shared only by a man jogging and a woman walking a black Lab, before the castle came into sight. And what a sight it was...so hard to believe we were still within the boundaries of Scotland's capital city. With the castle almost to ourselves, we spent the next hour or so exploring the towers and ramparts and imagining what life had been like six centuries ago. 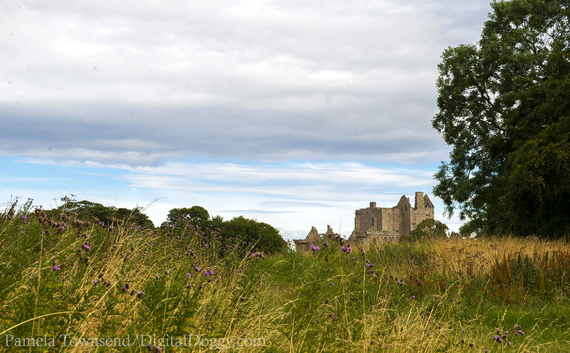 Lying fewer than 25 miles east of Edinburgh, Dirleton and Tantallon castles made for an easy and enjoyable day trip. Each had something unique and special to offer to our castle experience. As a Scottish Heritage staffer put it, Dirleton "has the gardens" and Tantallon "has the views."

Dating from to the 13th century, Dirleton Castle was a fortress-residence for three successive noble families...until a siege by Oliver Cromwell's soldiers in 1650 rendered it militarily unserviceable. We were duly impressed by the massive wood "bridge" over a dry moat that served as the castle's entrance. But, like a Labradoodle named Isaac, we were captivated by the colorful blend of perennial blooms in the gardens, which date largely from the late 19th and early 20th centuries and include the world's largest herbaceous border according to the Guinness Book of Records. 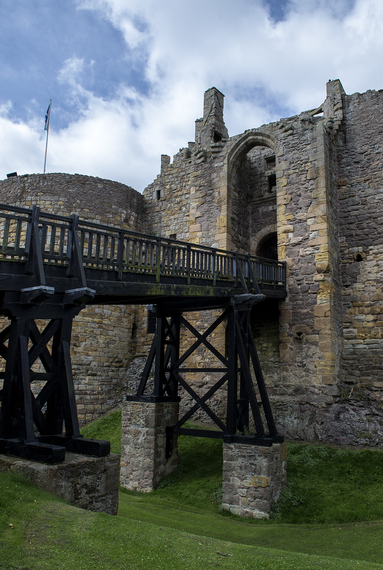 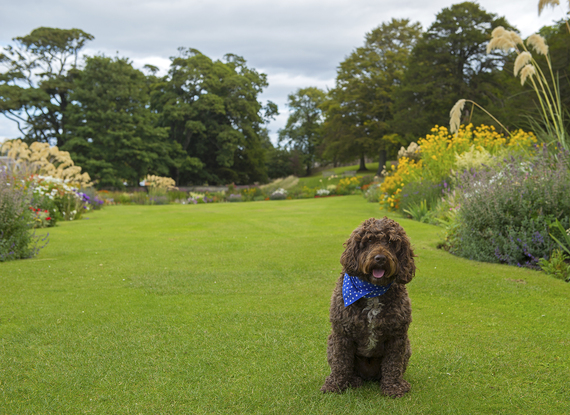 Like Craigmillar, Tantallon Castle is invisible from the main road. After parking the car, we strolled along a narrow lane between fields bordered by hedgerows to the small ticket office/visitors' center before finally catching our first glimpse of this formidable14th-century stronghold. It took my breath away! 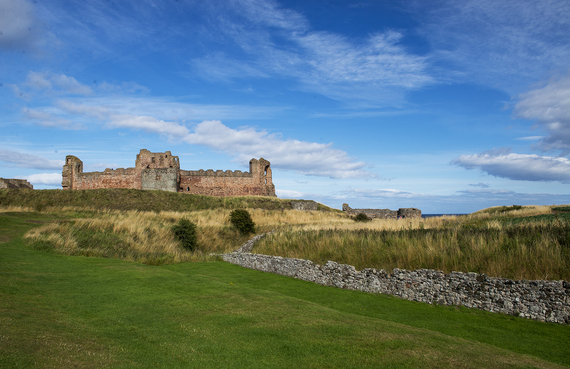 Perched on a promontory overlooking the Firth of Forth, Tantallon is haunting, romantic, and ruggedly beautiful in its own right. It also offers spectacular views of the coastline cliffs and Bass Rock, home to more than 150,000 gannets at the peak of the season. 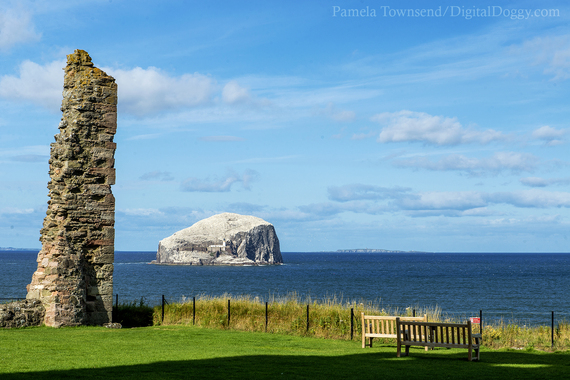 To the west of Edinburgh, on the way to Stirling, lies the Palace of Linlithgow, birthplace of both James V and his daughter, Mary Queen of Scots. Its role as a tranquil retreat from affairs of state came to end when it was destroyed by a fire in 1746. Today, the shell of the palace and the adjacent park and lake provide a tranquil setting popular with walkers, picnickers, and tourists. 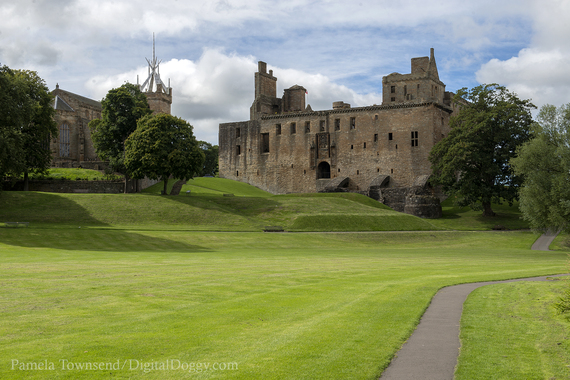 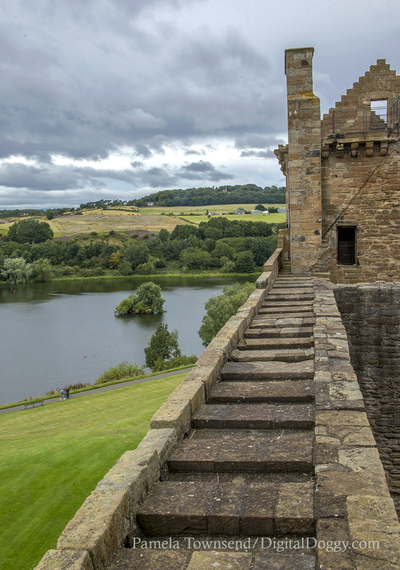 A bit further from Edinburgh, in the village of Doune, lies a castle of the same name. Smaller than some of the others, it nevertheless has a long history, serving as home to Robert Stewart, the 1st Duke of Albany and ruler of Scotland, in all but name, from 1388 until his death in 1420. It also just happens to have filled in for Camelot in Monty Python and the Holy Grail and more recently a location in the pilot for Game of Thrones and the fictional Castle Leoch for the TV adaption of the Outlander novels. Kind of cool. 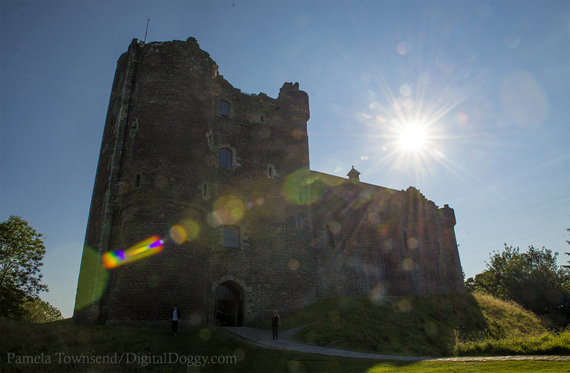 Much larger than Doune Castle--or any of the other castles we visited, for that matter--was our final stop: Stirling Castle. Situated high on a volcanic crag, Stirling served as a well-protected royal residence complete with a chapel, a vast great hall, and opulent living quarters designed to proclaim James V's power and sophistication. The outer walls provide sweeping views of the surrounding countryside. It made a fitting end to our Scottish journey. 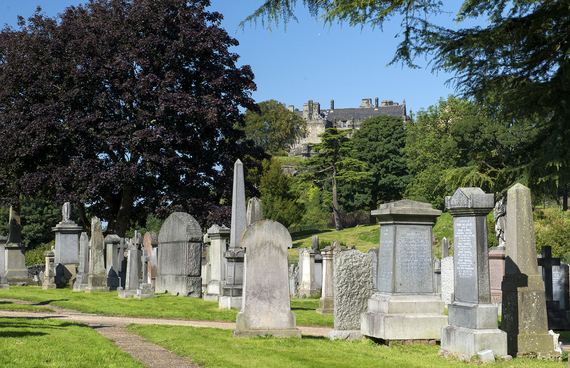 While the wealth of castles made for a truly memorable experience, anyone who knows me will tell you that dogs play an important part in my life, whether at home or "on the road." Anywhere I go, I find myself walking up to complete strangers and asking if I can greet--and perhaps photograph--their dogs. And Scotland was no exception. I met many cute canines, including: 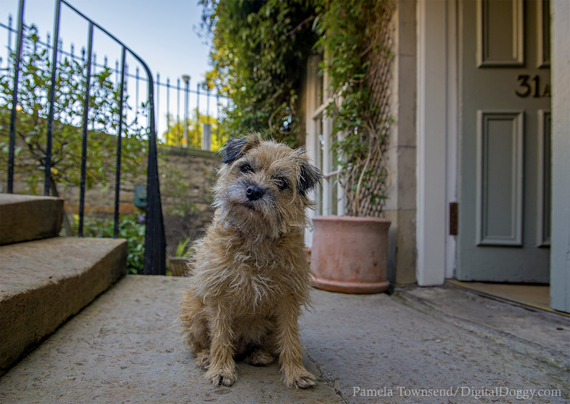 Izzy, a border terrier who lives at our Edinburgh B&B, The Guest Room, and headed the canine welcome wagon; 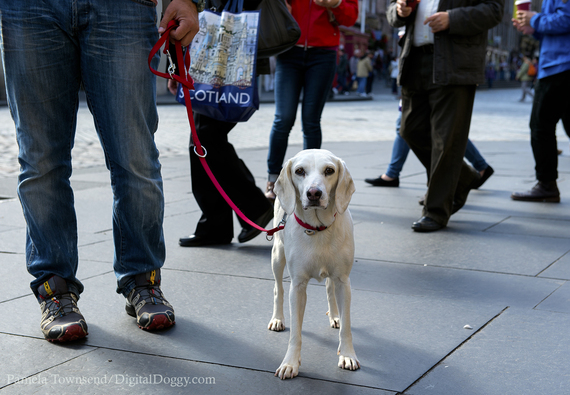 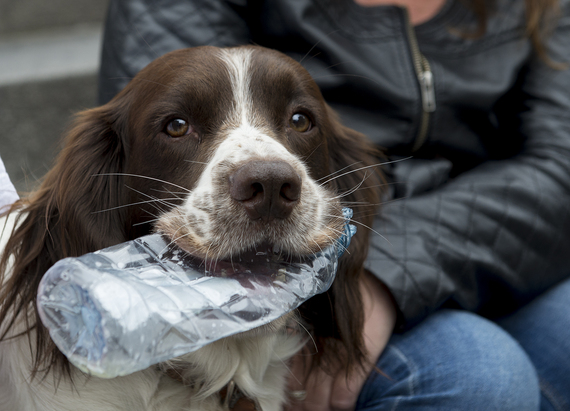 Sadie, a rescued beagle mix from Sardinia, being walked among the tourists on the Royal Mile and an English spaniel playing fetch with a plastic bottle nearby; 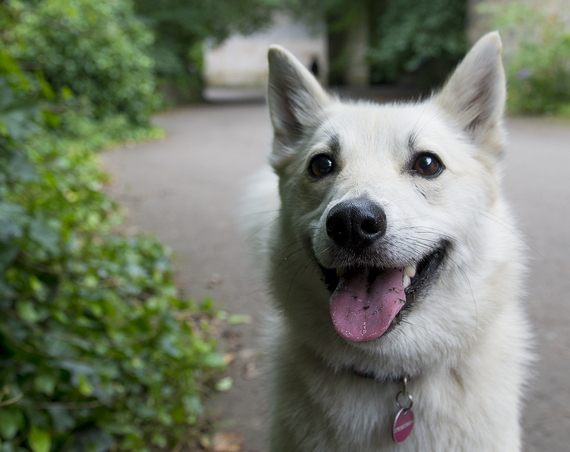 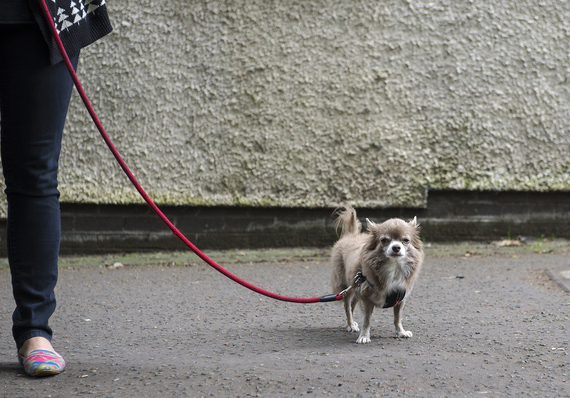 A husky mix pup and a Chihuahua enjoying a stroll on the riverside path in Dean Village; 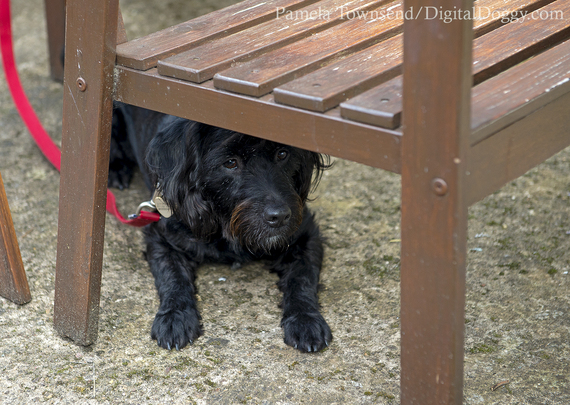 Elsie, a Labradoodle pup, who socialized with diners at an outdoor eatery in Doune; 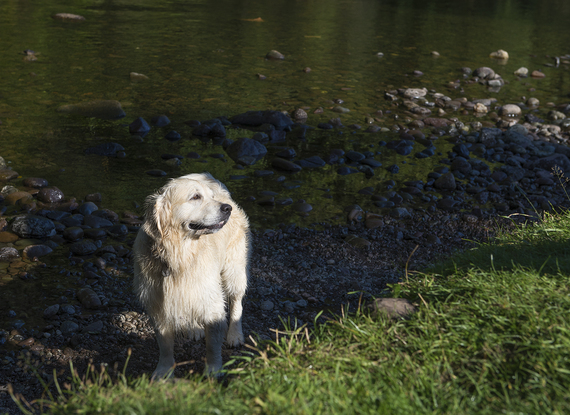 A golden retriever enjoying a swim in the Allan Water near Stirling; and 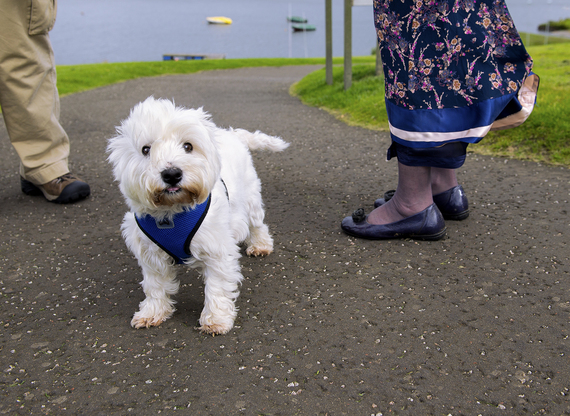 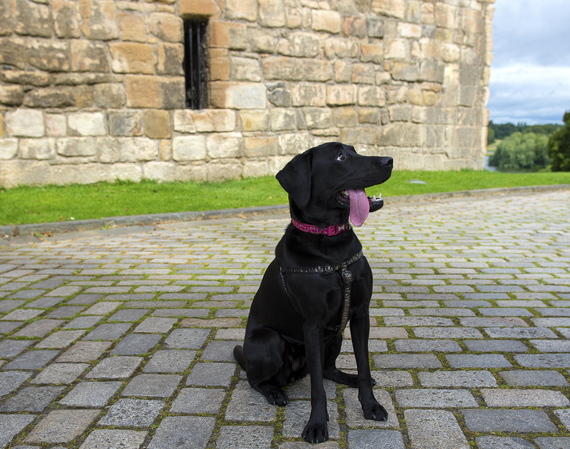 A Westie named Hannah strolling the parkland adjacent to Linlithgow Palace while young black Lab Orla took a well-earned break after working on her "manners" with a trainer.

Sadly, our interactions with these charming ambassadors of Dogdom are now just a lovely memory. So...where to next?