If the Internet has taught us anything, it's that people love cats. And that cats are weird.

While we may joke by saying that a "domestic cat" is an oxymoron -- can you really "own" a cat? -- they have been enjoying a symbiotic relationship with humans for centuries. Yet a lot of cat things are still totally baffling to us. Maybe your cat is just an oddball at heart, but here we'll attempt to explain why.

For security, mostly. Cats are instinctively drawn toward boxes because they're protected on three sides and can watch what's going on around them through the opening. You can't sneak up and scare your cat when it's in a box. Or so they think.

Remember that cats are also hunters. So when they're hiding out in a box and see something interesting go by, they can spring out and take that thing by surprise. Even if it's much more likely to be your ankle than a potential dinner.

Why do cats purr?

The short answer is that no one's entirely sure, but we have some theories.

Purring is generally associated with positive experiences, like being fed or petted, so it's assumed by most people to be a sign of a happy cat. Kittens learn to purr a few days after birth, researchers suggest, as a way to tell Mom "I'm okay." But cats also purr when they're frightened or injured, so it's not always a way to communicate contentment.

A purr happens when the cat's brain sends messages to its laryngeal muscles -- the muscles around its vocal chords -- allowing them to twitch 25 to 150 times per second, or 25 to 150 hertz. Some research has suggested that sound frequencies in this range can be therapeutic, strengthening bones and providing pain relief.

Why do they knead you?

Biologist John Bradshaw suggests that cats may see you as a "larger, non-hostile" cat. And their behaviors toward humans are driven mostly by instinct, including kneading, which kittens do to their mother's stomachs to stimulate milk flow. It's often thought that adult cats associate the motion with maternal comfort (and food), so they repeat it in adulthood. Not that your cat sees you as its mother, necessarily -- more like a roommate who's super tall for reasons it doesn't understand.

But since cats are also known to knead pillows and other surfaces, another explanation is that the behavior stems from a time when wild cats would pat down foliage to make a bed. Or, since they have scent glands in their paws, kneading may be a way for cats to mark territory.

What's up with catnip?

Catnip is a strange drug for cats. After smelling the plant, which is related to mint, they'll roll around euphorically, chase invisible prey and keep coming back for another hit. It doesn't have this effect on all cats. About 20 to 30 percent don't appear to be affected by the stuff.

But for those that are, researchers believe the compound nepetalactone is to blame. The compound binds to the cat's olfactory receptors -- which is why eating catnip doesn't do much -- to mimic a feline pheromone that makes them go nuts.

Why do cats, unlike dogs, all look really similar?

Dogs come in all shapes and sizes -- from Irish wolfhound to Chihuahua -- while cats, aside from having different colored fur, all look pretty similar to the untrained eye. Of course there are different breeds of cats. We've got Siamese, British shorthair, Maine coon, Manx, Persian, Scottish fold and lots more.

But dogs' genetics are better at mutating, which is how we get so many different types of dogs. Researchers suggest they have what's called a "slippery genome," meaning that their genetic makeup will adapt to mutations (that might otherwise have fatal consequences) relatively quickly. Cats (along with humans and the vast majority of other animals), on the other hand, don't have this ability. So we're stuck with cat breeds we may or may not be able to tell apart.

Yep. In the sense that their DNA doesn't differ too much from big cats, anyway. A 2013 study in Nature Communications revealed that big cats -- lions, tigers, and leopards -- share 95.6 percent of their DNA with our fuzzy domestic felines.

According to the study, all cats alive today last shared a common ancestor 11 million years ago. You'd think they would have diverged quite a bit genetically in the ensuing years, but comparing the genome of a Siberian tiger to domestic cats showed few big differences, suggesting cats are all "very well adapted, successful evolutionary machines,” one of the researchers said. Big cats did, however, show several genetic mutations not present in other animals that help them run faster and digest meat better. So in some ways, Fluffy is actually just a harmless -- depending on her mood -- version of a fearsome predator.

Why do cats hate water when they spend so much time cleaning themselves? 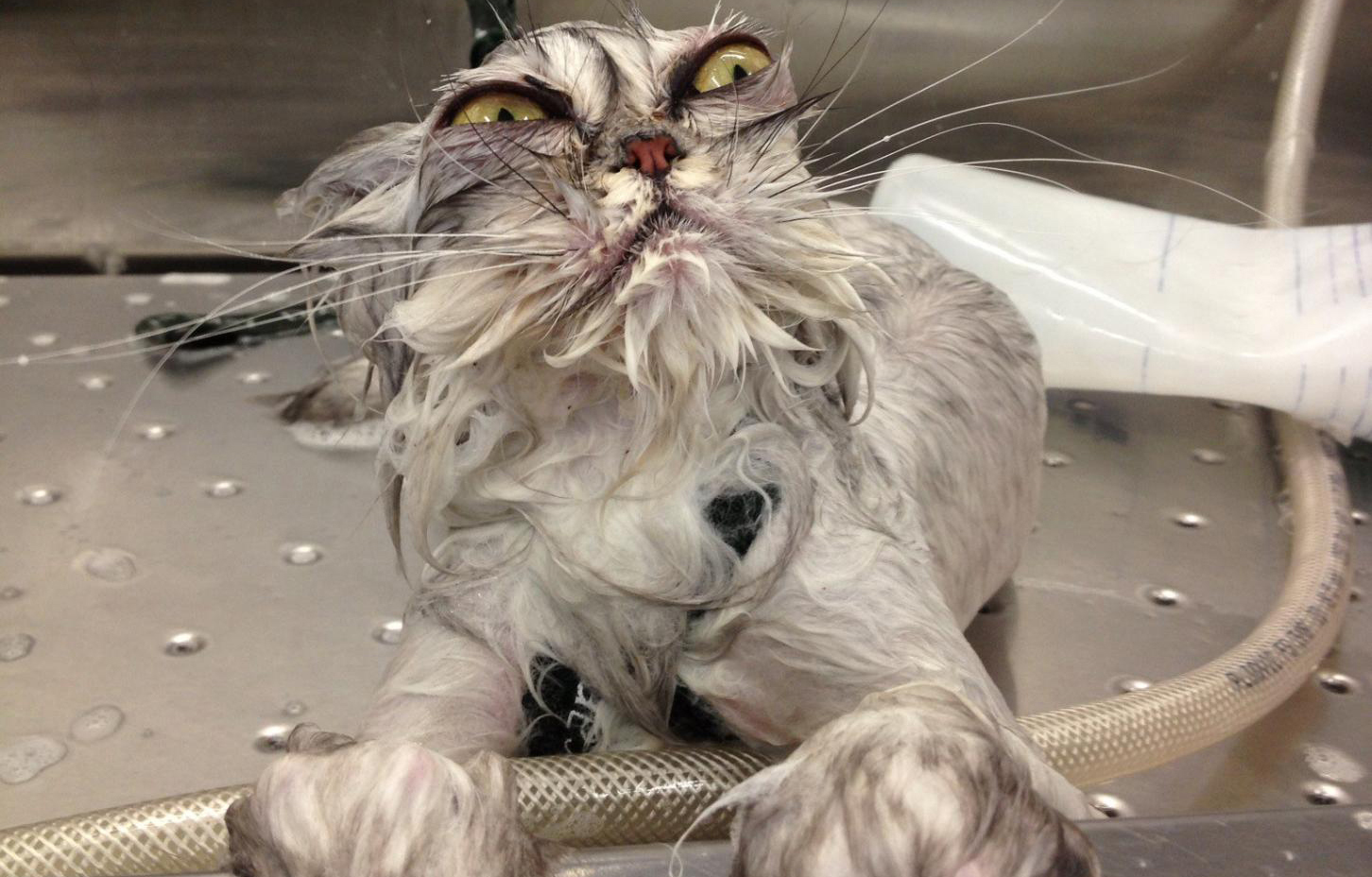 You'd think that a notorious neat-freak of an animal would like being cleaned off in a bath, but that's not the case with cats. Some love going for a swim, but most others will try their best to claw everything within reach at bath time. There are a few different hypotheses.

One is that a waterlogged coat doesn't dry quickly and makes cats exceedingly uncomfortable. But it's also possible that humans have simply always sheltered domesticated cats from the elements, so as a species they aren't used to getting drenched. It could be that cats associate water with predators -- even big cats will sometimes stay on land to avoid river-dwelling crocodiles. Or, since cats are also predators themselves, they may have a strong natural aversion to getting wet because the smell they give off (like a wet dog) after a bath is a dead giveaway to prey.

Or they're just weird. But we knew that.

Why do cats hate us?

You may have heard that cats aren't our biggest fans. Unlike dogs, who may wait patiently by the door for their owners to get home, cats tend to show much greater indifference to their human overlords. But also unlike dogs, they've not been domesticated to obey humans' orders.

Humans began to see cats as partners once our ancestors switched to agriculture-based livelihoods, because they were good at catching mice and other vermin. But they were almost never bred for any specific purpose other than hunting or looking pretty. Combine that with the fact that they frequently reproduce with their feral counterparts and you've got a domesticated species that is still, essentially, wild. So maybe it's not that they hate us -- they just don't think they need us.

Why can't you train a cat?

Oh, but you can! Some people have even successfully potty trained their feline companions à la Mr. Jinx in "Meet The Parents." There's even a kitty toilet training seat, dubbed the Litter Kwitter, that helps a cat learn how to do its business with a series of plastic rings covering the toilet bowl. The idea is that over time, the owner will remove each smaller ring in succession, enlarging the opening over the bowl until there's nothing but a regular toilet seat.

Cats may also learn how to do tricks. But remember, they haven't been bred to obey human orders like dogs have, so it can be a bit more exasperating. ASPCA suggests the secret is motivation -- find a treat your cat goes absolutely nuts for every time -- and refraining from any punishment over a misunderstood command. Cats can learn some cool stuff if you've got the patience to teach them!

Why do we buy anything for cats?

Correction: An earlier version of this article suggested that tigers avoid the water due to the threat of predators there when, in fact, they love to swim.

You're Not Crazy, Your Cat Is. Here's Why Kitties Do The Weird Things They Do.
Helpful Cats 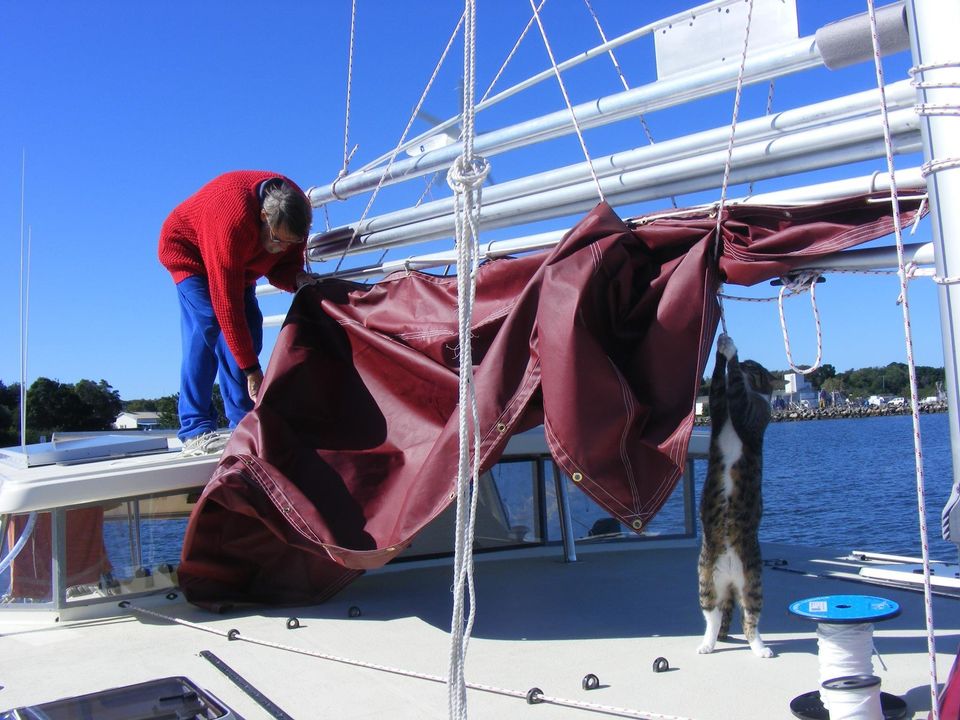