Kiss that pink dream car goodbye. Barbie's new set of wheels is a chariot pulled by a cat.

A new Kickstarter campaign seeks funding to create a Roman-style chariot designed to fit Barbie, or any doll-sized figure, that would ideally be strapped to a feline.

Those who donate $50 or less will receive files for reproducing the chariot in 3-D. Donors who give more get the actual model -- cat and harness not included.

Behold the Barbie cat chariot in all its glory: 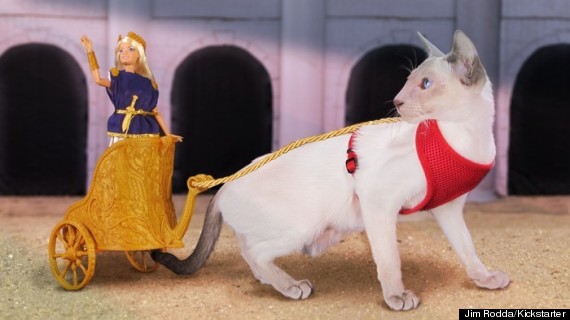 The Kickstarter is the latest project from Jim Rodda, or Zheng3 as he’s known online. Rodda told The Huffington Post in an interview that he's a big fan of "sword and sandal" movies like Ben-Hur, and said that such movies helped inspire him to create the mini-chariot. Donors have pledged nearly $1,000 to his new campaign, but there are still 28 days to go.

Rodda said he has no affiliation with the Barbie brand or its creator, Mattel. By day, he works as a creative director for an independent video game studio, but with this campaign he's just looking to harness the viral power of cats to get attention for his 3-D printed side projects. His own cat, Coco, served as inspiration.

“The cat was really important. I wanted to do something that was going to be really fun and I know that people on the Internet really like cats,” Rodda said.

Rodda is aware that cats do not liked to be messed with.

“I will actually be amazed if anyone can get a cat to pull this thing,” Rodda said. Even after bribing Coco with $25 worth of salmon, Rodda said, the cat just wasn't into it. “Trying to get cats to do anything is just impossible.”

But since 3-D printing can be scaled to just about any size, Barbie has plenty of other options for potential beasts of burden.

“This will also fit a chihuahua, maybe," Rodda said. "You know, if you had a big enough printer I’m sure you could hook it up to a German shepherd, or a horse, whatever.”

What about hamsters, or possibly gerbils?

“That’s a fantastic idea,” he said. “You could print it hamster size and put a Lego guy in it. That would work. But if you’re going to do hamster size, I would recommend multiple hamsters. Like a team of between four to six hamsters.”

Whatever animal you decide to strap to the chariot, Rodda said the project is a "means to an end." The Kickstarter campaign asks for $15,000, which will not only go toward making cat-pulled Barbie chariots but also help Rodda expand his 3-D printing projects from a hobby into a more legitimate business. (Last year, Rodda raised $6,000 to create a suit of armor for Barbie that could be printed in 3-D.)

Rodda hopes the chariot will give him the exposure he needs to continue executing his ideas for products that can be made using a 3-D printer. He said his ultimate goal is to get today's kids to reimagine and play with old toys instead of just playing in a virtual world.

"[My friends have] all told me that their kids don't really play with dolls," Rodda said. "Their kids don't play with action figures anymore. Everybody's on screens and iPads. So one of the things that I'm trying to do here is to merge screens and toys and get people to make stuff again."