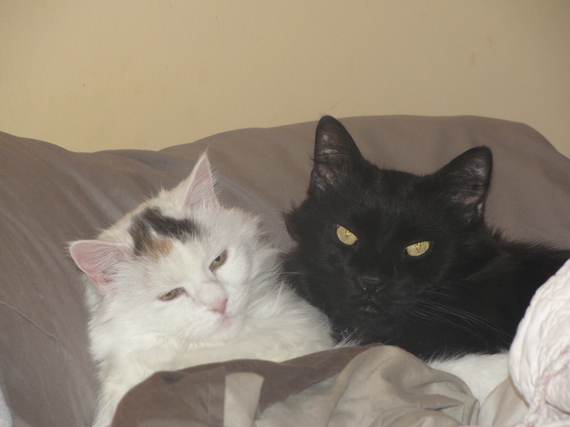 I consider myself a forceful woman -- not given to many crutches. No nightlight keeps vigil while I sleep. Spiders don't make me squeamish. I know where the oil goes in my car. I am a woman of a certain age, but so far, that has never held me back. Still, I do have this one overwhelming Achilles heel (and it's not from my Christian Louboutins). It's because of my cats. I love them too much.

So, okay, I admit it: I'm cat codependent. It's an addiction I've struggled with all my life. But happily, these days, I'm not alone. Women (and men) everywhere have caught on to what I've known for years: There's no getting "enough" of cats, which is why an ailurophile like myself will spend hours on Facebook and YouTube pawing over cat videos. That is, when I'm not trolling the net for cat clothing, jewelry, tattoos, or coupons for the latest cat café. Why I've even considered plastic surgery to look more like my cat.

Still, it wasn't always like this. In the days before Grumpy Cat and Lil Bub, people thought I was a joke, the infamous cat lady gone over the edge.

"Did you notice her upper lip?" one of my business associates cackled. "She looks like she's sprouting whiskers."

"Yeah, and her briefcase stinks of salmon" another answered. "It's horribly unprofessional."

"What about those earrings?" yet another associate chimed in. "She makes them from her cats' fur. Disgusting."

Yet what did those naysayers know? Back then, the general populace thought a cat was, well, just a cat. They had no idea. It's only now that cats are getting the respect they deserve. It's only recently that people have come to see them as the loyal, loving, entertaining creatures they are. It's only today that the cat reclaims the honored place she had back when pharaohs wore snakes on their heads and people rode to work on chariots.

And talk about being in synch. I've never met any human that could ever match my cats. Oh, my husband comes close. But even he has his limitations. In all the years I've known him, he's never once run down the stairs and rubbed against my legs the minute I walk in. Then too, when I'm in the tub, he doesn't sit quietly alongside like the cats, grooming himself. And if I fall asleep on the couch after a hard day's work, you won't catch him perched on my stomach, purring and kneading me, like they do. Oh sure, he has his attributes. It's just that my cats are infinitely more "simpatico."

Even in this age of the cat, though, some people still snicker that I go overboard. They don't realize I'm in recovery, and things take time. However, I am getting better. Litter by litter. Why only last week, I bought scoopable on sale instead of the designer brand I've imported in the past. I saved two bucks, but I felt like a cad. True to their self-sacrificing nature, the little darlings took it on the chin. They only did their business twice on the rug.

Truth is I have had to cut back in other ways, too. And it almost broke my heart. It isn't easy explaining to fur children who're used to having the air-conditioning and HDTV on all day that they have to sweat and look out the window. But I have put my foot down. I no longer open up tin after tin of cat food to find one they like. I've set a limit of nine. And I've canceled the cats' animal enrichment classes with Ulma.

What's more, no cats eat from our plates anymore. I bought them their own bone china. And I don't jump up each time they want to leave the room. All the doors, including the powder room, now have cat flaps.

So I'm making some progress. And the fact is, with so many other women (and men) coming out of the bag about their cat codependency these days, I feel much better. I don't feel so alone ... so ostracized.

But for now, I'll just finish massaging Nolan Nolan's temples -- he gets those awful sinus headaches when he stays out all night. Then, maybe I'll surprise the kitties with a real treat. I mean how hard can it be to give a cat a French manicure?