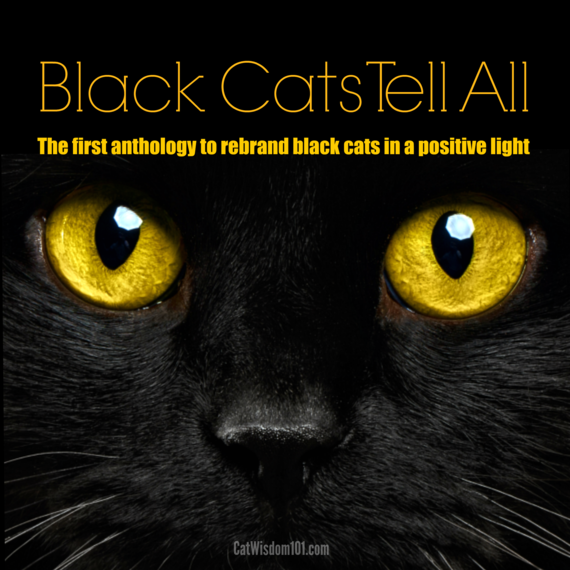 That cat expert, Layla Morgan Wilde, happens to be my wife and we both feel that these cats have gotten a bad rap, associated as they are with the dark side; witch's familiars (as if there's anything wrong with that) and all that other stuff that feeds into primal fears and prejudices. Currently, in the United States, black cats are 50% less likely to be adopted in a shelter setting.

Layla, founder of catwisdom101.com wants to make a difference and has taken to Kickstarter to raise funds for a book, Black Cats Tell All, that will highlight just how adorable, inspirational and downright adoptable they are.

Here's Layla's take on all this:

It's time for a new perspective. Black cat lives matter and to judge a cat simply by the color of their fur is discrimination. The world is full of fear or ignorance of something or someone different. We fear what we don't understand. That mysterious unknown gets twisted and embedded culturally, generation after generation. That's how myths are created, like the superstition that black cats are evil. Black cat lives matter. It's time to stop the prejudice.

This collection of 22 positive, black cat stories (a first of its kind) will be narrated by the felines themselves and among those telling tales will be Cole; of Cole and Marmalade fame. This feline duo, made famous by Chris Poole on YouTube (88 +million YouTube hits) has joined with Layla to further this non-profit educational effort.

Other notable supporters of the effort include Gwen Cooper, New York Times, bestselling author of Homer's Odyssey: A Fearless Feline Tale, or How I Learned About Love and Life With a Blind Wonder Cat. Cooper has written a glowing, book blurb for Black Cats Tell All.

Perks for supporters include an autographed collectible, donated by Francesco Marciuliano, writer of the New York Times bestseller, I Could Pee On This: And Other Poems by Cats. Scott Metzger, syndicated cartoonist, has also created some art work to be given out as perks.

Passionate about her goal to rebrand black cats, Layla sees the publication of the book as a first step in a comprehensive outreach effort to convince potential adopters to look beyond the prejudice and misconceptions and consider providing a black cat with a forever home.

Layla, who grew up in Canada, has been doing good things for felines since she founded the Toronto-based, non-profit, Annex Cat Rescue in 1997, and has continued her advocacy on behalf of this furry community since arriving in New York in 2001; including a memorable appearance - with one-eyed cat Odin - on a 2011 Daily Show segment, "Sophie's Choice," which also featured cat celebrity/hipster Jackson Galaxy.

So, consider pledging to this non-profit 501(c)3 tax-deductible effort. Black cats everywhere will be grateful.

Joel Sucher is a producer/director with Pacific Street Films, writing on a variety of subjects for American Banker, In These Times and Huffington Post. On occasion he's been known to pen a blog or two on the subject of cats (and the worlds they inhabit).