Scarlett Johansson purrs, mewls, and occasionally hisses as Maggie the Cat in the new Broadway revival of Cat on a Hot Tin Roof, but there is not much of the claws-out, feline ferocity that make Margaret Pollitt one of Tennessee Williams' most desperate characters.

The problems with director Rob Ashford's tepid staging of Williams' saga of avarice, mendacity, and betrayal on a Mississippi cotton plantation, circa 1955, come early. For starters, almost the entire cast drawls in accents intending to place them somewhere south of the Mason-Dixon line, but are so laughably exaggerated that the opening scene between Maggie and Brick is difficult even to understand.

But there are more serious troubles beyond phony twangs. Johansson conveys little sense of the desperation that is driving Maggie to lure her husband back to bed in time to prevent Big Daddy's entire 28,000-acre plantation from going to Brick's brother, Gooper. Throughout the opening act one keeps waiting to see the Maggie "consumed with envy and eaten up with longing," as she describes herself, but she never shows up in Johansson's performance.

On the other hand, there is not a lot for Maggie to get hot about in Benjamin Walker's Brick, who comes across more as a lazy slacker than a former football hero who "just quit playing," or with what Maggie calls the "charm of the defeated." Even in Brick's drinking, there is no feeling that he's seriously waiting for the "click" of oblivion that the Bourbon will bring him.

It is further hard to imagine that the fire of sexual passion ever burned between Johansson and Walker. When Maggie tells Brick what a "wonderful lover" he was, she doesn't even look at him, but stares out a window. Recounting her futile and fateful episode with Brick's friend Skipper, the reason for their estrangement, Johansson could be telling an anecdote about someone else rather than a personal memory. And when Brick goes after her with his crutch, there is no real menace, none of the killer instinct that rises in Brick when the subject of his troubled soul mate Skipper comes up.

There is not much in Ashford's staging that sheds light on the play. As Big Daddy, Ciaran Hinds tends to shout when he wants to show his frustration with Brick or his contempt, either for Big Mama or for his other son, Gooper, and his raucous and conniving family. If there are mitigating factors in Big Daddy's coarse and bullying character, Hinds fails to find them.

Debra Monk provides the one convincing performance as Big Mama. Her love for her favorite son is palpable, and her relief at what she assumes is Big Daddy's reprieve and her grief at eventually learning the truth that he is in fact dying are equally persuasive.

Cat is a curious choice for a revival by Ashford, an award-winning director and choreographer, primarily of musicals. The play won the Pulitzer Prize in 1955, and the movie three years later boasted a fabulous cast that included Elizabeth Taylor as Maggie; Paul Newman as Brick; Burl Ives as Big Daddy; Judith Anderson as Big Mama; and Jack Carson as Gooper, all in defining performances.

Ashford and his tech team created a lavish bedroom set with enough doors for a farce that the actors have to keep opening and closing (the original had imaginary doors); a king-sized bed at center stage; billowy curtains that lead onto a gallery that runs around the room; and three ceiling fans. The bed gets a lot of traffic, once even with Big Daddy and Big Mama ludicrously flopping onto it.

PHOTO GALLERY
ScarJo In 'Cat On A Hot Tin Roof'
Download
Calling all HuffPost superfans!
Sign up for membership to become a founding member and help shape HuffPost's next chapter
Join HuffPost
Voting Made Easy
Register to vote and apply for an absentee ballot today
Register now 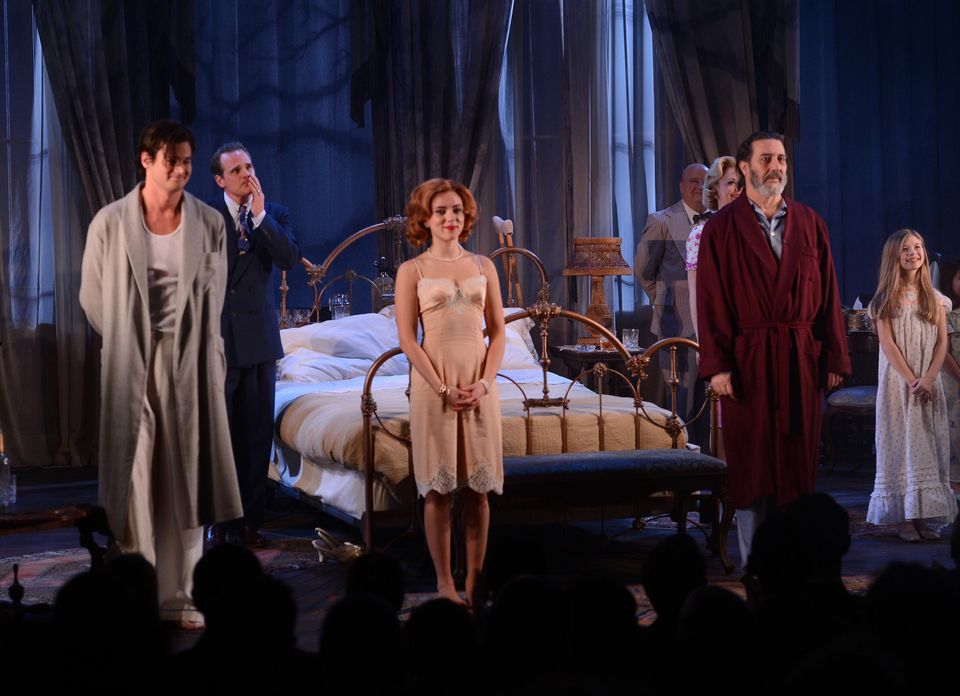