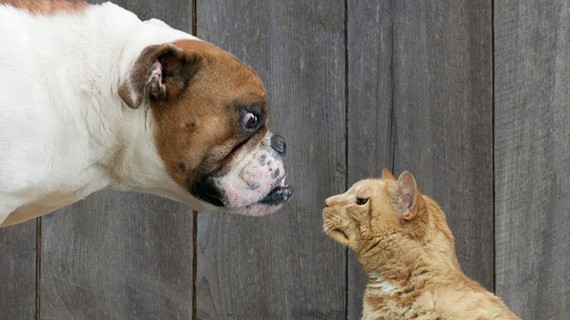 As humans, we're predisposed to have hard opinions on things. Often this serves to our benefit (e.g. racism is bad, pizza is good). But on occasion, it can get us into trouble. Especially when we apply these rigid perspectives to areas that don't warrant them. Case in point: cats and dogs.

Apart from the small percentage of folks that doesn't like pets (buncha weirdos, amirite?), society falls into two categories: cat people and dog people. It all sounds fairly innocent at first, with the implication being, "Between these two wonderful species, I prefer A over B."

But once we peel back the layers, there's a whole lotta derision bubbling under the surface. Much of the time, cat people love cats at the expense of dogs. Dog people take the counter position. Ask one group what it thinks of the other group's animal preference and you can bet your PetSmart membership the words won't be pleasant. Some typical criticism:

CAT PEOPLE: "Dogs are slobbery, yappy, too clingy, and high-maintenance. They have too much energy and demand constant trips to the dog park. Also, your entire day centers on their g-darn bathroom schedule."

DOG PEOPLE: "Cats are stuck up, lazy, and emotionless. The only time they show affection is when they want something from you -- which is usually when you're fast asleep at 4:30am."

Such acrimony, no? Where does this all come from? Clearly it transcends the pride of pet ownership: we never come across heated exchanges between hamster fans and tropical fish enthusiasts.

Perhaps some of the hostility stems from the fact cats and dogs get along about as well as, uh, cats and dogs. Hear me out on this. Animal lovers value the opinions of their furry companions, right? Which means if your loving Labradoodle growls at a random passerby, your first instinct is to assume ol' Ruffles knows something you don't. (In this hypothetical example, you own a Labradoodle named Ruffles.) As such, there's much less of a chance you'll be taking this random passerby out to dinner. (In this example, you occasionally ask strangers out on dates.)

Simply put, we place great stock in our pets' judgment. (With the exception of eating from the trash; they're on their own with that one.) Which means when our cat hates dogs -- or our dog hates cats -- consciously or unconsciously we're far more likely to follow suit.

Which is a shame, because the millennia-long rivalry between these two species is really none of our business. What do you do when your friend Gillian doesn't get along with your friend Andy? In lieu of picking a side in their petty squabble, you hang out with them separately. Same rules apply to our furry pals.

When it comes to cat people vs. dog people, some mutual terrain needs to be found. Which isn't all that difficult. Both factions relish the love and companionship their respective species bring. They also lavish their four-legged friends with everything from yummy snacks to adorable toys to pet insurance that keeps 'em healthy. Were I a marriage counsellor, I'd say, "These are some wonderful commonalities you can build on." I'd also charge $185 an hour, because my insights don't come cheap.

I know I'm not the only one out there who's a fan of both cats and dogs. But at the moment, we're a not-so-vocal minority. So hey, how about we all agree to a détente of sorts? The end result will be a marvelous thing: total pet-owner unification. Now that's a cause worth fighting for.

To boot, we can smugly gossip about the fact cats and dogs are like, 100 times more adorable than babies. Take that, breeders!

I'll see myself out.