No kitten around: In Florida, there exists a magical place that is basically a petting zoo for friendly shelter cats.

It's free to get in. Astonishingly, there's no wait list. You're welcome to stay for hours.

Some people have meditation to clear their heads. For others of us, there's this.

"Cats have long been known to reduce stress and anxiety in humans," says Mary Alexander, whose shelter, Pet Pal, supplies the gorgeous wee furballs. "For people that aren't able to have cats in their home, this is a great place for them to come and spend time with the animals without restrictions."

And the best part is that it's great for the cats, who aren't just there to be affectionately manhandled -- it's also the purr-fect way to help get these guys into permanent homes of their own. 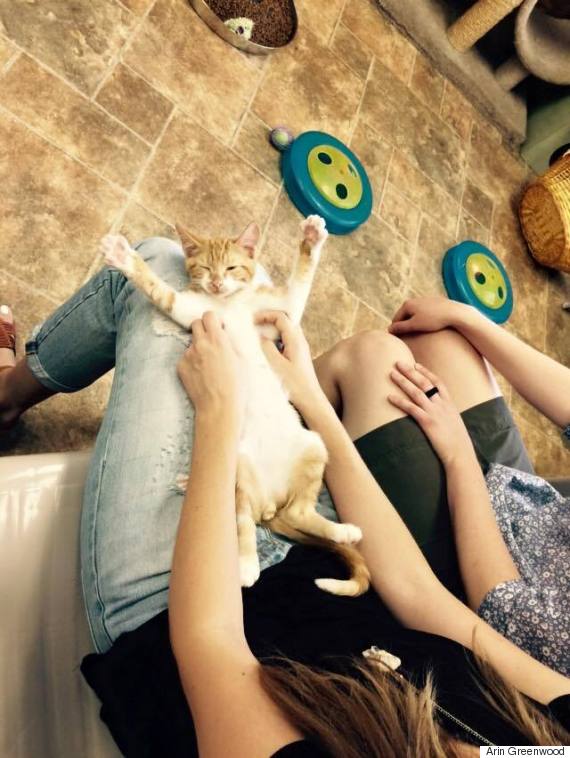 The cattery is located inside an independent pet supply store, Pet Food Warehouse, which is tucked away in a St. Petersburg strip mall, some 20 minutes outside of Tampa.

Susie Kupfer, who owns the store with her husband, Neil, tells The Huffington Post that the couple always made animal rescue part of Pet Food Warehouse's operations.

Five years ago, when their retail space expanded, the Kupfers decided to expand their rescue mission as well.

They enclosed a space inside their store where the cats could always be cage-free -- and people could come hang out with them -- and gave it to Pet Pal, which takes in and finds homes for animals at risk of being euthanized in local shelters. (Pet Food Warehouse also donates food, litter, "upkeep and love," says Kupfer, in addition to handling adoption paperwork.)

At any given time, there are generally about a half-dozen cats living in Pandora’s Playhouse, named for the Kupfers' beloved Maine coon, Pandora, who died some three decades ago, and whose framed photos are out on display.

The room itself is primarily designed to be comfortable for cats: there's big windows for gazing upon the outside world, carpeted cat towers wall to wall and lots and lots of toys and food and fresh water. The cattery is quiet -- except for some light rock on the loudspeaker -- with crocheted afghans on the seating areas.

Some cats are romping; some are snuggling with thrilled visitors; others are idly staring out the window at the strip mall parking lot.

Yeah, it's really nice here for everyone (who is a cat or who loves them).

"Since there are no cages it allows for the cats to socialize with each other and warm up to people -- we call it interviewing people," Kupfer says. "As the saying should go, if the cats are happy, the people are happy." 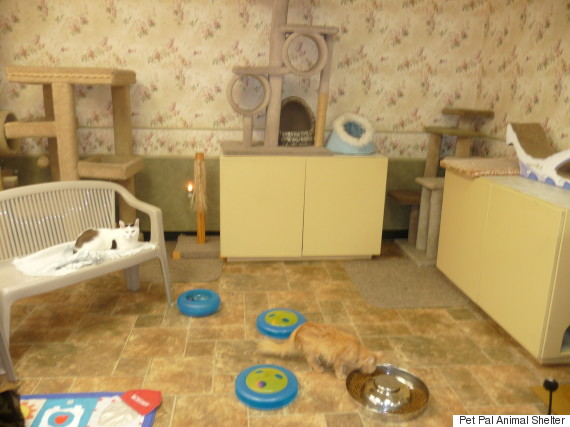 Last year, 61 cats were adopted out of Pandora's Playhouse -- their photos are also posted just outside the cat room, on a board appropriately marked "Happy Cats!"

Some were snatched up within hours, others may take more than a year.

"As long as it takes," Kupfer says.

Alexander says that if adoption is the primary goal here, folks who just need some kitten time but aren't currently in the market for a new pet should also come by, as long and as often as they like.

Spending time with people helps the cats become well-socialized -- which helps get them out of this already-terrific place, and into someplace even better: a loving home.

"The more comfortable the cats are around humans, the greater the chance that they will be adopted," says Alexander. "We love to hear that people are spending time with the animals." 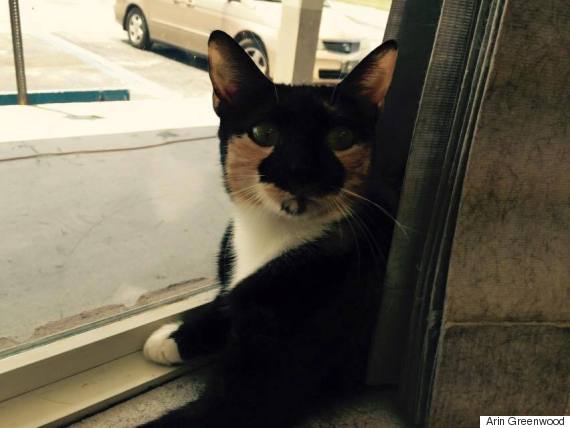 Sweet Harper was adopted, between HuffPost's first and second visit to the cattery. Photo: Arin Greenwood

Know a shelter with a creative adoption program? Have another animal story to share? Get in touch at arin.greenwood@huffingtonpost.com!