A cat shot with an arrow last week in Davidsonville is expected to fully recover.

Xena, a 2-year-old Maine Coon mix, has been recovering at the Rude Ranch Animal Rescue in Harwood since Saturday. Kathy Evans, the rescue organization's president, said while Xena is somewhat frightened around staff, she doesn't appear to be in pain.

The cat also appears to have a healthy appetite.

Xena will be in quarantine until she is spayed and up to date on all her vaccinations.

Evans said that without any unforeseen setbacks, the cat could be put up for adoption in two or three weeks.

While the arrow injury is a first, the rescue has taken in animals with buckshot and BBs embedded in their skin, Evans said.

Robin Small, Anne Arundel County's Animal Control administrator, said officers believe the cat was shot with a crossbow bolt. Small said she could not remember another case of a cat getting shot with an arrow since she began overseeing Animal Control two years ago.

The person responsible for shooting the cat could face animal cruelty charges. If convicted, that person could face a sentence of between 90 days and three years, as well as between $1,000 and $5,000 in fines, said Kristin Fleckenstein, spokeswoman for the Anne Arundel County State's Attorney's Office.

The cat's former owner contacted Animal Control last Wednesday after discovering that she had been shot through the left shoulder with an arrow. The cat had been living at a residence in the 3000 block of Riva Road for about a year. The cat would occasionally wander off the property, police spokesman Justin Mulcahy said.

Police do not know whether the cat was shot on the owner's property.

It took animal control officers until Friday afternoon to capture Xena. She was scared and injured, making her capture difficult, Mulcahy said.

The owner surrendered the cat in hopes it could be saved. The cat was taken to the Belair Veterinary Hospital in Bowie, where the arrow was removed on Friday. 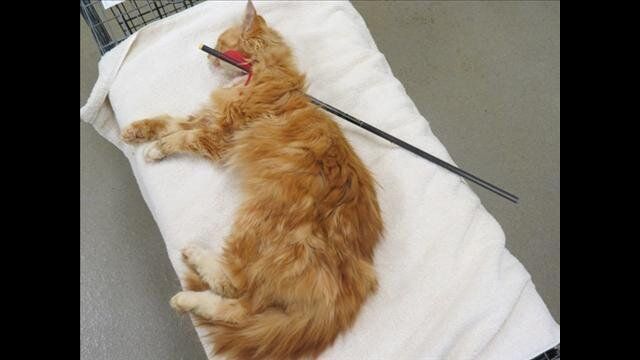