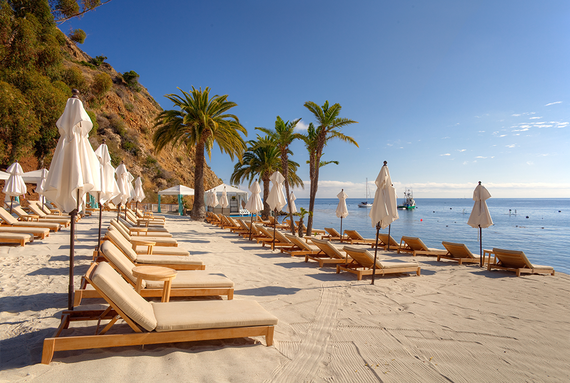 There is at least one place in Los Angeles County where cars are scarce, the pace is slow and wild buffalo, rather than paparazzi, roam free. It is about 22 miles off the coast of Southern California and accessible primarily by boat or ferry but it is indeed part and parcel of Los Angeles County. Of course, I am speaking here of Santa Catalina Island -- known simply as Catalina in local parlance -- the largely unspoiled 21-mile island that has been a favorite getaway for both famous and not-so-famous residents of Southern California for decades.

In the early heyday of Hollywood, while privacy craving stars like Lauren Bacall, Humphrey Bogart and Marilyn Monroe were regularly kicking up their heels on the island and quietly mingling with the locals, the Chicago Cubs gathered on the island annually for spring training, a practice that lasted for over three decades.

Simultaneously, Catalina became a popular backdrop for classic films including the likes of Treasure Island and Mutiny on the Bounty starring Clark Gable. Inevitably, the island eventually added to its allure by cultivating a whiff of scandal thanks to the murky circumstances surrounding the death of actress Natalie Wood who drowned off its coast back in 1981.

These days, as it has actually been for most of its modern existence, Catalina is primarily a laid back beachside resort town where rows of quaint cottages line the main streets of town and golf carts and bikes are the primary mode of transportation. Locals who have lived on the island all their lives, mix with families for whom the island has been a regular escape since its early beginnings. In season, tourists aplenty swell the ranks of the town and cover its beaches, but there can still be no denying that Santa Catalina Island feels a world apart from the hustle and bustle of Los Angeles though the hum of the city buzzes just over an hour away. 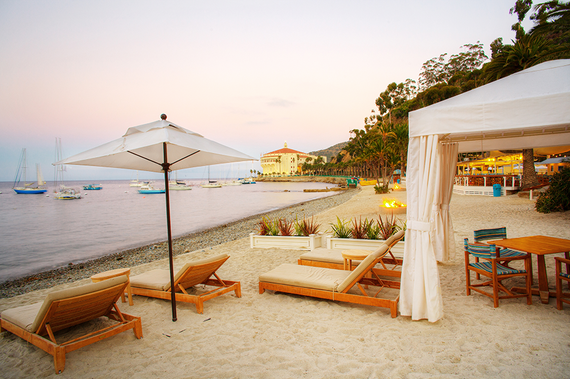 For one of the best vantage points from which to appreciate Catalina's charms, the Descanso Beach Club is without question the best venue. Tucked into the cove of one of the last private beaches with public access in California, the Descanso serves up picturesque views of both the Pacific and Catalina's landmark Casino along with more than a few amenities that only serve to reassure its status as the premiere destination on the island.

Not only does the club boast the only seaside restaurant on the island, it also offers chaise lounge rentals and seventeen fantastically private cabanas, the reservation of which includes complimentary bottled water, smoothies upon arrival, chaise lounges, Wi-Fi and beach towels (massages and bottle service are extra but available). And, just in time for summer 2014, the Descanso added three new luxury cabanas that can accommodate up to six people and include all of the amenities of the smaller cabanas as well as a waterfront deck and a personal beach butler. One of the more posh amenities the island offers, these cabanas are worth the splurge if only because even in the City of Angels, such treatment is hard to come by at any cost.

Apart from the beach and the town of Avalon, which serve as the sort of heartbeat of Catalina, the other eighty percent or so of the island remains largely undeveloped, which is where the buffalo come in. So the story goes, back in the 1920s a film company brought in 14 bison for use in a movie and when the filming was over, they gifted them to the island and the population has since grown to 200 under the guidance and management of the Catalina Island Conservancy. 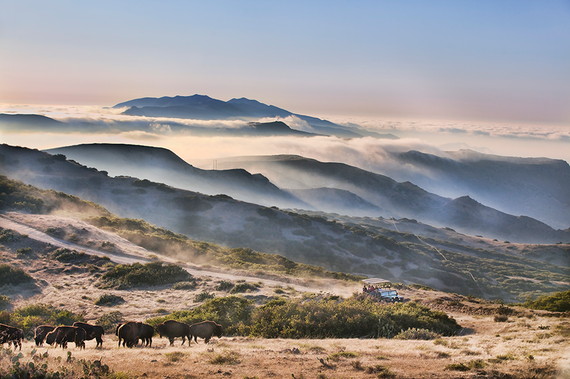 Speaking of the Conservancy, because so much of the island has been so well preserved, there is much natural beauty to take in on Catalina. You could hike parts or bike others but it is an exceptionally rocky island, so I recommend a bio-fueled Hummer off-road tour over Catalina's scenic East End Trail. In just about two hours, you'll get a bird's eye view of the island as you climb 1,684 feet to the summit of East Peak overlooking Avalon and with any luck along the way you'll also manage sightings of all manner of wildlife including the indigenous Grey Fox and maybe even a bison or two.

Stay for a day or totter around for a week, it all depends on your relaxation budget. The beauty of Catalina is that it's easy. It's an easy place to get to (there are ferries leaving from Long Beach and Dana Point regularly) and it's an easy place to be once you do. And perhaps best of all, it's a quick and easy escape from Los Angeles without leaving Los Angeles and all the benefits of Southern California life and weather. Now, I ask you...how bad can that be?

Find out more about Catalina Island at www.visitcatalinaisland.com.