Symphony leaders and philharmonic enthusiasts have long pondered how classical music havens can attract a young, contemporary audience. It seems as though one Lithuanian orchestra has found the solution to top them all. And it comes in the form of a catcerto.

The Klaipeda Chamber Orchestra, led by conductor and composer Mindaugas Piecaitis, included a cat -- yes, a four-legged feline -- in one of their ensemble performances, amounting to what we can only imagine was the world's hairiest soloist. The adorable collaboration took place in 2009, but a recording of the splendid event has been making its rounds on the internet this week. 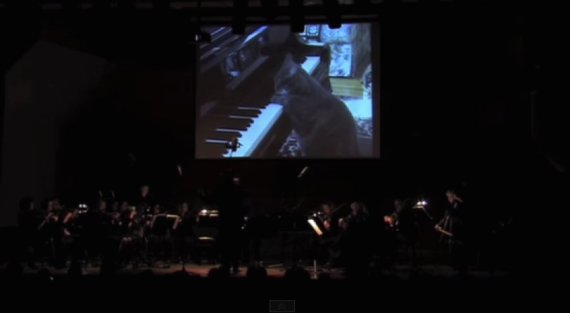 As you can see in the video above, the cat was brought in via a giant projected video, which showed the thumb-less pet pounding and curling on the keys like a true virtuoso. The famous internet musician is Nora the Piano Cat, and she hails from New Jersey. (In case you were interested, she has been watched by over six million YouTube fans, appeared on The Today Show and prefers Yamahas, according to her website.)

Meanwhile, in the video, professional violinists and cellists play live in the foreground, following the kitty's avant-garde concerto. After nearly 4 minutes of adorable ear twitches and gentle stringed instrument ambience, an elated audience erupts in applause. And you will too.

If we can learn anything from this unique classical music experience, it's that when in doubt, go the way of the internet. Cats can save the world, why not aging musical genres?

Lithuanian Orchestra Performs With A Piano-Playing Cat, Calls It A 'Catcerto'
Classical GIFs