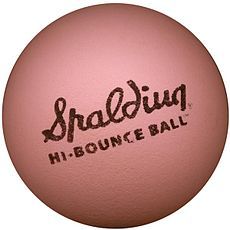 You have to catch the ball when it comes to you. Get one of those old fashioned Spaldeens and then throw it to your significant other. It's meditation since all you can think about is that ball. The competitive distraction of games is absent because the only object is to pass the ball back and forth and the stillness requirement, which makes meditation a problem for some, is done away with as now you have to move freely to throw and snag an object as it moves through space. Who would have thought that such a simple and almost effortless activity could be such a perfect vehicle for attaining a meditative state? Why has no one thought about this before? Normally, to mediate you have to go into some dark Asian setting with scrims, like a dojo or zendo, in which there are Japanese or Chinese characters on the walls. This along with the sounds of gentle music and the smell of incense is nice, but even more inviting is the notion that the enjoyment of a meditative state can be achieved in an act of pure play. No pain no gain is the usual expression accorded activities like working out that are supposed to improve our well being. But mediation which is predicated on relaxation and concentration both might be enhanced if the will factor is removed. Just go out and have a catch and before you know it your mind will be as clean (and devoid of thought) as a whistle.
N.B. Throwing a Spaldeen can save money on marriage counseling, for argumentative couples who have trouble with verbal communication.