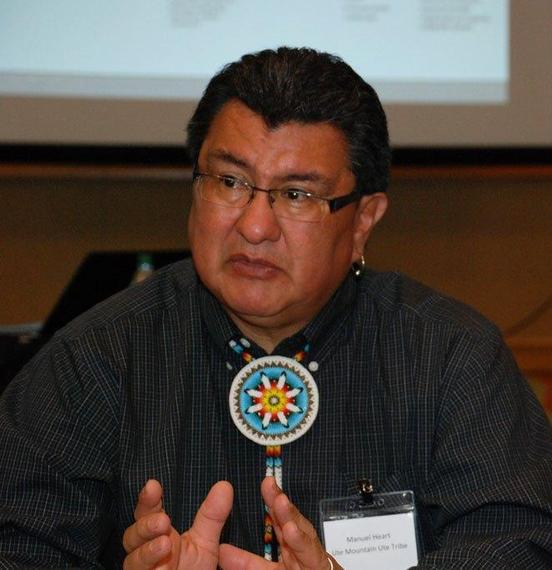 "When Chairman Heart of the Ute Mountain Ute Tribe gave us the Dreamcatcher at the end of the retreat, I felt like I had just won a lifetime achievement award! I think this event may have changed my life forever," said Beverly Santicola, the organizer of the Ute Mountain Native National Partnership Retreat.

I had the honor of facilitating this retreat with my colleagues on April 6-10, 2015 in Denver, Colorado. I share Beverly's emotions about this retreat because its outcomes provide a glimmer of hope in a national crisis. As reported by Julian Brave Noisecat in his recent article: "Native Children Are Facing A 'National Emergency.' Now Congress Is Pushing To Address It," tribes all over the country face "overwhelming poverty, epidemic suicide, combat-level rates of PTSD and low educational attainment among Native youth."

The Ute Mountain Ute Tribe (UMUT) is one of three tribes that comprise the Ute Nation and one of 566 federally recognized tribes that are dealing with this national crisis. For more than 2,000 years, the people of the Ute Nation have lived in Colorado, Utah, and Northern Arizona. Nearly 40% of the UMUT lives below the poverty line, more than double the average poverty rate in Colorado. Many tribal families are dependent on financial assistance to survive. The average life expectancy for the Ute Mountain Ute Tribe is only 55 years of age. The UMUT faces many issues affecting Native American communities, including teen suicides, alcoholism, rampant tobacco use, and juvenile crime.

Beverly Santicola (65), a two-time winner of a Purpose Prize Fellowship for helping rural people, had been working with the Ute Mountain Ute Tribe for over four years, when she asked me to coach her on how to help even more young people in tribal and rural communities across the country. Beverly's dedication to alleviating poverty stems from her own experiences growing up on a farm in the Midwest. When Beverly was 12 years old, her father had a heart attack in late summer, at a time when the crops on which their livelihood depended were ready to be harvested. As Beverly recalled: "I felt helpless -- I was too young to step in for my father. But magically, the next day, the neighbors showed up to bring in our crops." Beverly never forgot their act of kindness and what it meant to her family.

When Beverly learned of the tribe's crisis she wanted to bring in partners to help - just like the neighbors of her childhood. To kick off the partnership, which includes the UMUT, the National Association of Resource Conservation & Development Councils, the Bureau of Indian Affairs, and other federal agencies, she organized the Ute Mountain Native National Partnership Retreat. The event exceeded expectations, as it inspired the tribe to develop socially innovative solutions to address many of their economic, health, education, and social issues.

Here is an overview of the seven key elements of this new approach to social innovation that we used at the retreat:

1. Walk in our Moccasins: Inspired by Chairman Heart's invitation to retreat participants "to walk in our moccasins," we facilitated a process of collaborative dialogue to help participants really understand the tribe's needs.

2. Empowered Leadership: We coached tribal leaders on how to lead the development of their own solutions instead of merely giving advice.

3. Strength-Based Approach: The tribe created solutions based on its passions and strengths, adapted from the methodology shared in my book, The Boomerang Approach, rather than focusing only on its needs.

4. Partnering for Expertise and Resources: The tribe invited powerful partners such as the National Association of Resource Conservation & Development Councils -- an organization with expertise from more than 1 million volunteers across the nation.

5. Visual Art and Film: The tribe invited Films by Youth Inside, an arts organization that teaches tribal youth how to tell their stories by making their own films. We also used graphical facilitation to artistically capture the vision and strategies of the tribe. As Chairman Heart emphasized, "We are visual people and understand better that way."

6. Tribal-Led and Place-Based Solutions: The tribe took the lead to develop solutions such as the Tour de Ute, which leverages the natural resources and beauty of tribal land.

7. Facilitated Dialogue with Government Agencies: After the tribe had developed solutions, we facilitated a dialogue with government agencies where the tribe presented its plans and the agencies identified expertise and resources to help implement these solutions.

Facilitating dialogue around tribal-led solutions has been recognized as a new approach to collaboration between the tribe and government agencies. Rod Robinson, Deputy Associate Director, Diversion and Re-entry/Tribal Justice Support, at the Bureau of Indian Affairs, who brought many of the agencies to the table, commented, "It was a powerful experience to see so many federal agencies so enthusiastic to partner with a tribe that is unflinchingly committed to strengthening their community environment for generations to come." DeAnne House, Treasurer and member of the Tribal Council, was equally enthusiastic when she said, "It made us proud to be able to share our stories with so many agencies and for the Ute Mountain Ute Tribe to be recognized by the federal government."

As reports of social crisis and increased violence hound us every day in the media, it is more imperative than ever that we develop community-led social innovation approaches in real partnership with government to address these kinds of issues. The Ute Mountain Native National Partnership is a positive step in this direction. This partnership would not have been possible without the commitment of people from the tribe, government agencies and other organizations.

This retreat was just the beginning. I believe we have found an innovative approach that I hope will serve as a model for other struggling tribes, and empower them to catch their dream too.