Looking back now, I should have realized what was happening sooner. I should have saved my family, saved my two beautiful little girls, from it way sooner. But who ever thinks their happy home could be the cause of such pain and suffering?

Several years ago my husband and I sold our first home and moved into a much larger rental on the other side of town. As sad as I was to leave a more exciting part of the city, we needed more space. And once settled in, we were actually quite happy in our new pad. Each of us had the breathing room needed to be our best as individuals to then come together and create a happier, healthier family. The problem is, we'd never been more ill.

Life changed when we moved into that house. My youngest daughter, only two at the time, was sick so often that a stuffy nose and mild cough became the norm. She had pneumonia three times in less than three years and landed in the emergency room with croup. After my own Lupus diagnosis several years prior, I'd grown accustomed to falling ill or struggling with lethargy more often than the average woman my age. Still, I never could have anticipated the seemingly never ending flare of my disease that occurred shortly after we moved in and included everything from shortness of breath to aches and pains in bones I never knew existed.

As all four of us struggled, my husband and I felt we were constantly swimming upstream- pleading for a break in the current.

Come that holiday season, traditionally the happiest time of year for our family, my daughters anxiously awaited the arrival of their beloved grandmothers. But after each of their stays was sadly interrupted by awaking with terrible headaches, my husband became convinced that something in our home was the culprit.

So after two years and ten months of figurative and literal headaches, my husband made a life-altering decision to get to the bottom of things. The next morning we paid three hundred dollars for a mold inspection and calmly waited several days for results we anticipated would show nothing more than bad allergens in the carpet. What we uncovered was way more devastating. 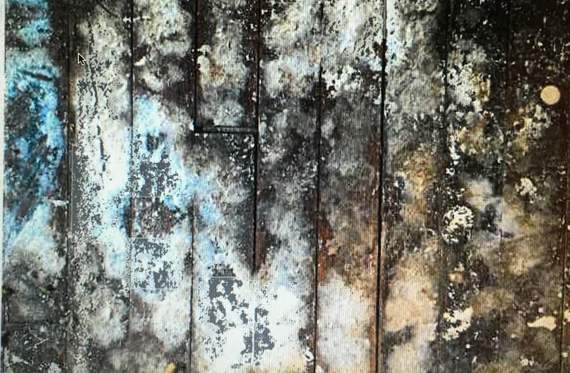 It was everywhere but the very worst source was under the carpet pad directly beneath my youngest daughter's bed. (The same daughter who'd had her only 3 bouts of pneumonia while living there.) Several inspections, tests and tears later, it was determined that our floorboards, heating and air conditioning ducts, inner walls and attic crawl space (which the inspector wouldn't examine without donning protective gear) were covered in Stachybotrys- the most dangerous of all black mold. Stachybotrys has been liked to many neurological, respiratory, circulatory and immune issues, in addition to skin, eye and vision problems.

The crazy thing is, prior to removing the carpet pad, not one spore was visible to the naked eye.

"You need to move out. Tonight," said the inspector.

What happened from that moment forward -- the immediate emergency hotel stay, the urgent relocation into a new home, the months of medical testing, the enormous financial burden and the emotionally painful disposal of numerous personal items -- are somewhat a thing of the past. What I hold onto, aside from the few possessions we were able to safely sterilize, is a very tender mix of guilt and gratitude.

I am thankful for my husband, who's gut instinct led to the discovery of a lethal toxin in our home. I am thankful for our doctors who took care to be sure there are no long-term effects of a living situation that quite literally could have killed us. And I am thankful that though the sight of the photo above still makes me vomit, that's due to emotional rather than physical pain. My daughter hasn't had pneumonia once since we moved out of that rental and the only thing making me gasp for air at night is anxiety over my mile long to-do list.

Thankfully, none of our bodies were infected with black mold and because the mold is no longer suppressing our immune systems, we are all healthier.

What remains, unfortunately, is regret that we didn't get to the bottom of things sooner... regret that we shut our daughter's bedroom door every night not knowing that there really was a monster living under her carpet.

I let my daughters live with a monster.

This experience has taught me way more than I ever needed or cared to know about homeownership, tenant law and even fungus, but that's worth nothing compared to what it taught me about myself. Our maternal (and paternal) instinct is an infallible as we are as parents. But in the end, it is all we ever have or require.

You may not need the reminder to follow your gut, to be relentless in what you believe no matter the consequence or judgment, especially when it comes to the safety of your family. Truth is, I wouldn't have guessed I needed it either.

Today my gut is telling me to share this story. Whether it reaches thousands or hundreds or even a single pair of eyes, that's not the point.

My gut is telling me to share this story.

More:
parenting adviceParenting HealthParentsmom guilt
Newsletter Sign Up
Raise the kind of person you'd like to know
Subscribe to our parenting newsletter.
Successfully Subscribed!
Realness delivered to your inbox