I woke up this morning and saw this article in my WTOP news email update. I couldn't believe what I was reading. 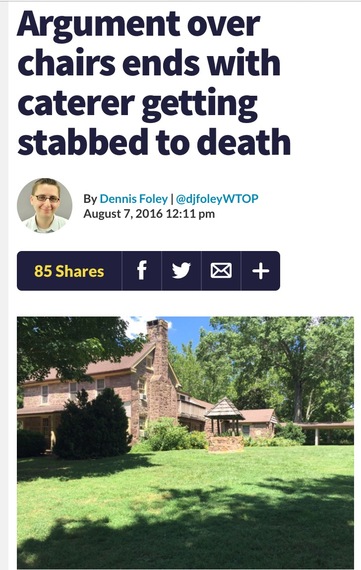 I don't think I'd ever have suspected that one day I would be writing a blog about civility between wedding vendors, but apparently, it's become necessary. I've been hearing more and more atrocious stories about altercations - frequently in front of clients - that should never have happened.

Vendors have been angry in the past when I've said that all of us (the wedding planner, the venue manager, the photographers, the caterers, the DJ, etc.) are "the help." No, we don't like to think of ourselves that way because, after all, without the unique contributions made by every individual member of a wedding team, the big day itself would not be a success. Together, we are the spokes that make up the wheel that rolls the wedding forward. But when you set all that happy bullshit aside and get down to brass tacks, we - and by we, I include EVERYBODY who gets paid - are the staff who are there to make sure the wedding happens. We are not guests. We are not VIPs.

We are not there to be seen or heard (unless we're making announcements, taking drink orders, or creating music). We are not there to socialize. If the bride and groom don't know the names of all the servers and setup crew, it's not a negative reflection on the team's performance. It actually means that the wedding flowed so smoothly that the wedding couple didn't need to know their individual names. We are supposed to be in the background. We don't dress ostentatiously, we don't drink with the guests, and we do our very best to blend in so we won't even appear in the wedding photos.

Unfortunately, as the wedding industry has grown, the number of vendors participating in executing weddings has grown tremendously too. In fact, the industry has grown faster than vendors can properly train their staff. There are a lot of people who call themselves "wedding vendors" who do not know the basic etiquette of working a wedding. The results of these lower standards have been disastrous on many occasions, but never more so than at a wedding in Chantilly, Virginia, last weekend.

Late Saturday night, after a successful wedding at a park venue in Fairfax County, a suburb of Washington, DC, a disagreement between vendors not only ruined a wedding, it resulted in the death, by stabbing, of a caterer by an employee of the wedding venue. They were arguing over chairs. Chairs!!!

News reports indicate that the venue employee had called the police around 9 pm to make a noise complaint - and that's the first unfortunate thing that happened. Unless that wedding group was swinging from chandeliers (and breaking them), nobody from the venue should have filed a noise complaint against their own clients. When the police arrived, they were told the dispute had been resolved, and they chalked it up to a "domestic" incident. It sounds like nothing could have been further from the truth.

Supposedly, the venue employee and the murdered caterer exchanged words earlier in the evening. Details are fuzzy, but it sounds like that irritated park employee in charge of the venue for the wedding (something his employers say he'd been responsible for many times) actually cut the power on the wedding, while it was in full swing! There was no microphone available for the cake cutting. I'm not sure what happened with the music. But when the wedding reception ended, things blew up. Over chairs.

The venue employee accused the caterer of stealing chairs that belonged to the park venue, and argued with her as she was loading them into her catering van. It turns out, she had rented some chairs, and used some of the venue's chairs, and at the time she was attacked, she was actually sorting them out. This is freaky, because co-mingling wedding supplies is not at all uncommon. I've had to sort out tables and chairs at the end of an event, and I wouldn't want to be attacked over that. We've even made mistakes and taken each other's chairs, and had to return them the next day. But I've never exchanged an unfriendly word with any vendor over an unintentional swap late at night, after the entire crew has been working for 12 hours. At that point, we all just want to clean up and go home. Nobody has the energy to fight over chairs. That's just ridiculous.

But, likely fueled by whatever had happened earlier in the night, this disagreement over the chairs rapidly escalated, and the wedding venue employee pulled out a knife, and stabbed the caterer to death. Yes, you read that correctly. One wedding vendor killed another wedding vendor, in front of wedding guests. Over chairs.

I've planned more than 500 weddings in more than nine years of wedding planning, and never could I imagine any scenario where something like this could actually occur. I worry about stupid drunk wedding guests diving into shallow swimming pools and breaking their necks. I worry about unattended children knocking over tiki torches or wandering down to the ocean and drowning. I worry about rowdy wedding guests getting out of control and breaking things at the venue. But I do not worry about whether my vendors will physically attack, and maybe even kill, each other. Especially not over chairs.

This is an extreme case, to be sure. And the killer was an employee of a park venue, not a full-time wedding vendor. That said, it's a lovely venue that hosts lots of wedding and this wasn't his first time at the dance. He called 911 and made a noise and disorderly conduct complaint about the wedding reception at his own venue. Nobody does that unless the situation is getting dangerous. And if things were that out of control, the venue employee should have followed through with the police when they arrived, and had the event shut down under the supervision of law enforcement. It certainly wouldn't have been the first time that's happened. Drunk wedding guests have been known to act like idiots, and things can get out of control. Brides are some of the worst offenders, when it comes to creating a melee at their own wedding festivities. Seriously, if you Google "bride arrested" you'll be shocked and awed by the number of hits you'll get. And no, they're not all stories about the same psychotic bride, and they're not limited to the United States.

What you won't easily find when you search are stories of wedding vendors fighting with each other. Oh, it definitely happens. But most of the time, no matter how unprofessional the vendors may be, they still know enough to have their disagreements out of sight, and earshot, of clients and their guests. When they're not discreet, it ends with a lawsuit, not a stabbing. More experienced vendors set aside their anger and push through the event, then discuss the problem after the wedding, not at the venue. Why? Because at the end of the day, every wedding vendor knows we are there to help the bride and groom have a fantastic experience on what will likely be one of the most memorable days of their lives.

The most tragic thing here is the fact that a woman lost her life. Over chairs. Think about that. The second saddest thing about this tragedy is the fact that the newly married couple's wedding was ruined in the most awful way possible.

"It was a wedding. A woman's day when she will never ever forget. And now she'll never forget it for all the wrong reasons," a wedding guest who was a witness to the attack told the local NBC news affiliate.

Look, wedding memories get ruined by thoughtless people all the time. I'm pretty sure my bride whose grandfather and father got into a fist fight - and drew blood - at the cocktail hour would consider her wedding ruined. The groom who got into a fist fight with his new father-in-law at the wedding reception after-party was a doozy, too.

Those examples of violence at weddings were caused by inebriated family and guests. Not unprofessional, or homicidal, wedding vendors who couldn't control their tempers. Civility between wedding vendors, even when things aren't going well, is critical to the success of the event. No matter what goes down, or whose fault it is, we're supposed to work together to solve the problem, and keep a smile plastered on our faces while we do it. If a mistake is egregious enough, a wedding venue will ban the vendor from future events, and the wedding planner will simply stop using them for their clients. If it's the venue or the planner who is in the wrong, a vendor certainly has the option to choose not to work for them again.

There is nothing that could happen at a wedding that merits violence between wedding vendors. I'd like to pretend that this murderous park employee wasn't actually a wedding vendor - I mean, he was working for the park, not the wedding, right? But the fact of the matter is that he was employed to open and close and supervise the venue, and they say he'd done it for numerous weddings and parties in the past. Not only did he kill the power to the venue, he actually killed the caterer, too.

Rest in peace, Chef Tyonne Johns. From your reputation with your industry peers, you were a great person and a fantastic caterer. You will be missed by many. And your death will never be forgotten, as it's one of the most horrible wedding stories anybody has ever heard.

More:
weddingswedding vendorswedding etiquetteWedding Venuescivility
Newsletter Sign Up
A weekly guide to improving all of the relationships in your life
Subscribe to HuffPost’s relationships email
Successfully Subscribed!
Realness delivered to your inbox