We first met Cathie Borrie years ago on our trips around the publishing world. It was immediately apparent upon reading her stuff that she was an amazing storyteller and an exquisite wordsmith with a true gift for poetic articulation. But her book was about such a difficult subject, we knew she'd have a hard time getting a traditional publisher interested. That didn't stop her. She wrote a deep, moving, glorious book, and eventually, after years of ridiculously hard work, she found her audience. We thought we check in with her to see exactly how the heck she did it. 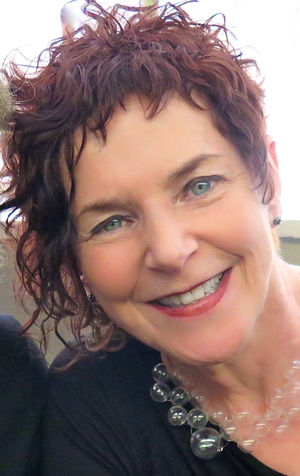 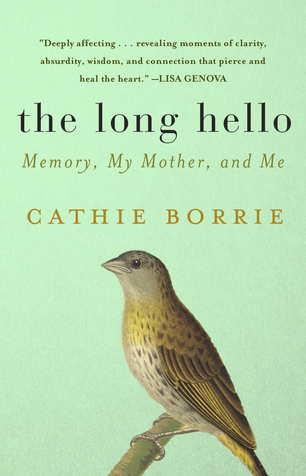 The Book Doctors: When did you first start becoming a writer, and how did you learn to be one?

Cathie Borrie: No doubt you are aware of that stale, sorrowful mantra: "I've always wanted to..." That cliché was my writing story. I dabbled in poetry as a child, followed by decades during which I had marvelous experiences and adventures but did not write. When my mother became ill and went on to develop dementia, everything changed for me, turned direction, and stopped. Her language evolved into one of extraordinary insight, humor, and poetic sensibility. I wanted to keep her voice, and began to tape our conversations. I think this time of quieting down, of listening and taping, served as muse for the release of my own writing voice. Mother living with dementia, as muse! My goal became to convey that the story is not a long goodbye, and that she had not become an empty shell.

How does anyone learn to be a writer? Can it be learned? I began my vignette-like pencil scratchings in 2004, when my mother was still alive and living with dementia. I have always loved learning, and loved going to school. It suits me: the discipline, the homework, the camaraderie, and I was thrilled when, in 2005, I was accepted into The Writer's Studio program at Simon Fraser University. This course changed everything for me and for my writing. Under the expert tutelage of author and then-director Betsy Warland, I honed the words I had already written and added thousands more. After the program, a number of us formed an inter-genre writing group, which provided me with an enormous opportunity to continue with my writing and editing.

TBD: What are some of your favorite books or authors, and why?

CB: I am reading or re-reading, and loving, The Conference On Beautiful Moments by Richard Burgin, The Night Sky by Mary Morris, Tinkers by Paul Harding, Seamus Heaney's Wintering Out, and Molly Peacock's Alphabetique: 26 Characteristic Fictions.

TBD: We've heard over and over from New York publishing people that books about Alzheimer's don't sell. We tell writers that they know more about their audience than New York publishing oftentimes does. Tell us about Cathie's wild ride to publication.

CB: I finished the work around 2008, at the time of the economic crash. Agents and publishers were pulling back on taking new clients, especially platform-less memoirists. On top of this dismal scene, I kept hearing that books about Alzheimer's don't sell, or that the market is saturated with memoirs about Alzheimer's. But non-fiction topics leave room for different perspectives, and I knew this work wasn't like anything else in the field, in form or content. It uniquely included the voice of an elderly woman living with dementia and no author had taken that approach with this topic. Also, I wrote a memoir with broader themes, which I set in context of family relationships, and, although its center revolved around dementia, it included universal stories that would, I believed, appeal to a wider memoir readership.

In September, 2010, Francesca Rosenberg, Director of Community, Access and School Programs for the Museum of Modern Art in New York, invited me to present The Long Hello for World Alzheimer's Month. I had been doing theatrical readings based on the manuscript internationally for a number of years, as I continue to do. For this event, Melia McLure accompanied me by reading my mother's voice. MoMA expressed interest in having the book available so I took a deep breath, and self-published. For the next four years I marketed the book to the best of my abilities and although I possess drive and determination, my tolerance for rejection is shaky, at best. At the time, media were not interested in a self-published author, and I still held dreams of being part of a publishing team. In 2014, author and memoirist Molly Peacock referred me to a literary agent, Marilyn Biderman, who secured a contract with Simon & Schuster Canada. Publication with a major trade publisher ushered in a sunny day for The Long Hello, and for me. Marilyn then placed The Long Hello with Arcade, an old and esteemed independent house that had recently been bought and resurrected by a larger independent, Skyhorse, while maintaining some of the members of its original editing department. I continue to perform excerpts from The Long Hello, sometimes accompanied by live musicians, and more recently have completed the stage play, co-written with playwright James Fagan Tait.

TBD: Tell us about delivering your keynote performance at MoMA for the World Alzheimer's Day event. What was that experience like? What were the repercussions?

CB: I think we can all agree that a call from MoMA would be considered a highlight in any author's career, as it certainly was in mine. MoMA runs a marvelous program for people living with Alzheimer's and their care partners: Meet Me at MoMA. To be able to tell my story, to hear my mother's magical words that defy the Alzheimer's stereotype, in that beautiful space, was unforgettable. I met wonderful people and received additional invitations after my appearance at MoMA.

TBD: What was it like to take some of the worst experiences in your life and make art out of them?

CB: My writing style has been described as "lyrical, poetic, and spare." The chapters about childhood, birds, horses, dance, even about sports' day, lent themselves to that form. But when I knew I had to bite the bullet and write about my parents' divorce, the death of my brother, my mother's last days, I looked down at the yellow paper with those perfectly spaced wide lines and despaired. How could I take those stories and render them in lyrical form? I hardly wanted to think about them. But, as other writers have described, beauty and meaning are available in the darkest of places, and I found that wonderful memories surfaced alongside the difficult ones. I recalled a poignant incident that occurred shortly after the death of my grandfather.

I would climb a tree after school to wait for my mother to come home from work every day, feeling a deep pleasure in looking out over the beautiful farms scattered throughout the valley, and breathing in the pleasing scent of pine, my fingers sticky with pitch.

In other parts, or scenes, as I think of them, sad memories were often infused with bird song, always birds, singing, and the moody sea, offering solace. Homesick at boarding school, my beloved English teacher reveals what it means to love by reading Yeats to us, her eyes closed, a thin private smile etched across her face. And finally, I found a euphoric comfort and sustenance in the writing process itself: that burning need to write sparingly, and the commitment to edit every sentence hundreds of times so that no word is unnecessary, or wasteful, or unfit.

TBD: What was it like to get a quote from Maya Angelou? It must be so gratifying to get so many amazing blurbs from doctors, writers, reporters.

CB: Maya Angelou's one word, "Joy!" was an absolutely astounding response to the work. Imagine a memoir centered on dementia, described with this one perfect word -- "Joy!" I am deeply grateful for all those generous people who endorse The Long Hello: Maya Angelou, Lisa Genova, MoMA's Francesca Rosenberg, and others whose names warm my heart and whose words fill that uncertain place in which a writer, manuscript completed, waits to be published.

CB: My current manuscript is a genre busting work for children. My wish list:
1. The stage adaptation, performed in theatres.
2. Just the right people to bring The Long Hello to the screen, with eyes knowing how to unearth the back-stories, the landscape, the beauty.

TBD: We hate to ask you this, but what advice do you have for writers?

CB: Edit your work so that when you send it to prospective agents and publishers, it is in pristine shape. To survive the process, muster: tenacity, a relentless drive, resilience, and a sturdy constitution.

Cathie Borrie briefly tried her hand at theater school, trained as a nurse, holds a bachelor of science in nursing from the University of British Columbia and a Master of Public Health from Johns Hopkins University. She has a law degree from the University of Saskatchewan and received her Certificate in Creative Writing from the Writer's Studio at Simon Fraser University. She continues to write new work, and to perform adaptations of The Long Hello, and is no longer an active actor, a nurse, or a lawyer. She lives in North Vancouver. You can see Cathie's website at: www.cathieborrie.com