Border justice is more than simply a legal issue; for some it is a moral, ethical and even spiritual cause.

The U.S. Conference of Catholic Bishops is highlighting what it sees as the humanitarian consequences of a flawed immigration system by organizing a Mass and procession at the U.S.-Mexico border in Nogales, AZ.

Bishops gathered in Nogales over the weekend and are participated in a border Mass on Tuesday lead by Pope Francis adviser and Boston Cardinal Seán O’Malley.

The USCCB launched the Justice for Migrants initiative in 2004, bringing Catholics together over an issue that has left the U.S. general public divided for many years. But chairman of the USCCB Committee on Migration Bishop Eusebio Elizondo said in a press statement, border justice is, at least religiously, a straightforward cause.

“What we fail to remember in this debate is the human aspect of immigration -- that immigration is primarily about human beings, not economic or social issues. Those who have died -- and those deported each day -- have the same value and innate God -- given dignity as all persons, yet we ignore their suffering and their deaths.”

"The purpose of this journey here to Arizona is to raise a consciousness about the need for our president and Congress to pass immigration policy and reform to address a broken system," said Bishop Gerald Kicanas of the Tucson Diocese. "We're also here to pray for those who have lost their lives along the border."
More From the Associated Press:

NOGALES, Ariz. (AP) - Roman Catholic leaders made a rare visit to the border and celebrated Mass on Tuesday in the shadow of the fence separating the U.S. and Mexico, offering Holy Communion through the steel barrier to people on the Mexican side as they sought to bring attention to the plight of immigrants.

Cardinal Sean O'Malley, the leader of the Boston Archdiocese, led a delegation of bishops from around the country and Mexico in the trip to the border, less than a week after President Barack Obama discussed immigration reform in a meeting with Pope Francis. They toured the border city of Nogales, walked along a notorious section of the border that was once a popular crossing point for drug and immigrant smugglers, and celebrated Mass just a few feet from the fence.

The Catholic leaders believe that immigration is a humanitarian issue that deserves urgent attention by Congress. They cite the dozens of immigrants who die each year in the brutal desert terrain while trying to cross illegally into the United States along the roughly 2,000-mile-long border with Mexico and note that the immigrants are simply trying to find better lives in America.

"This is not just a political or economic problem," O'Malley said Tuesday. "This is a moral problem."

Several hundred people attended the Mass, which was translated into Spanish, and a few dozen people peered through the border fence from Mexico to watch the ceremony. O'Malley and Bishop Gerald Kicanas of the Tucson Diocese offered Holy Communion through the fence, providing people in Mexico wafers as a blessing as some of the recipients broke down in tears.

During the Mass, the clergymen laid a wreath at the border wall to remember those who have died. It followed a similar event in Lampedusa, Italy, last year when the pope threw a wreath into the Mediterranean Sea to remember migrants who have died attempting to reach Europe.

The push for immigratio n reform in Congress has been stalled for months, with Democrats and Republicans unable to reach an agreement over the divisive issue.

House Democrats last week tried to force a vote on a comprehensive immigration bill, an effort that is likely to fail given Republican reluctance to address the topic in an election year while all signs point to major gains for the GOP in the November midterms.

The Senate passed a comprehensive bill last June, but the measure stalled in the GOP-controlled House, where Republicans have argued for a piecemeal approach to reforming the system.

Arizona state Sen. Al Melvin, a Republican running for governor, said the clergy visit will do little to solve problems on the border. He said developing private-sector jobs in northern Mexico and securing the border to prevent drug and human trafficking are needed to bring stability to both sides of the international boundary.

"Frankly, and I am a Catholic, I think this is irrespons i ble of these bishops to be down there," Melvin said. "They are not bringing stability to the border. They are adding to the chaos of the border. And it's not helping to save lives. If anything, I believe it will contribute to more lives being lost. We need to secure the border to protect lives."

During his first meeting with Pope Francis last week at the Vatican, Obama expressed his interest in getting immigration reform through Congress, explaining during a news conference that "there was still an opportunity for us to make this right and get a law passed."

"And as someone who came from Latin America, I think he (Pope Francis) is very mindful of the plight of so many immigrants who are wonderful people, working hard, making contributions, many of their children are U.S. citizens, and yet they still live in the shadows, in many cases have been deported and are separated from families," Obama said.

Mike Fleming traveled from Tucson to attend the Mass and vo i ced his support for the message of the Catholic leaders. 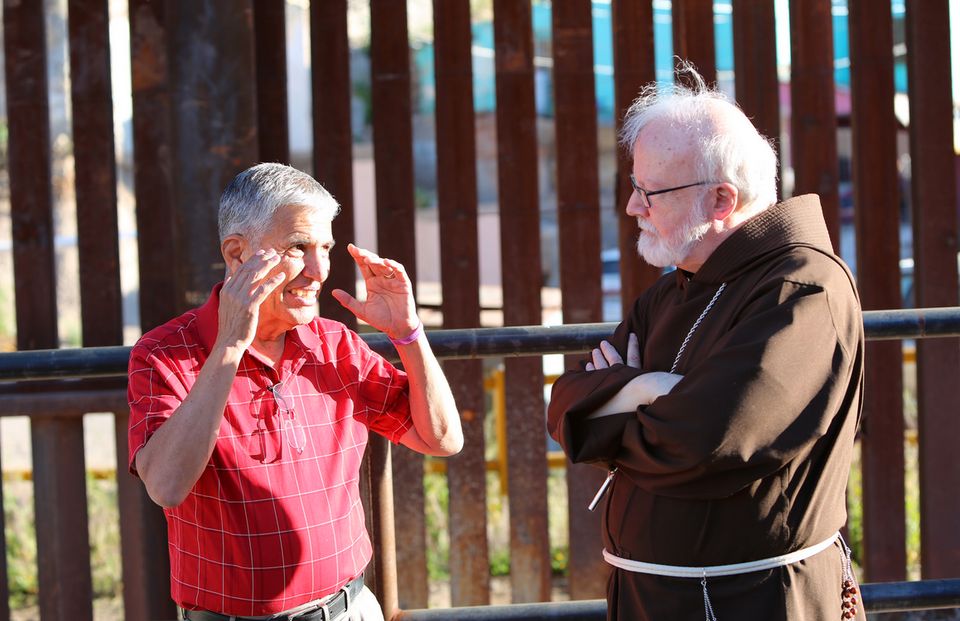 1 / 23
NOGALES, Arizona (April 1, 2014) - Cardinal Seán O'Malley of Boston and 7 other bishops celebrate Mass on the US-Mexico border in Arizona to commemorate the deaths of migrants in the desert and to pray for immigration reform. More information is available at www.justiceforimmigrants.org
George Martell/Pilot New Media