PHILADELPHIA -- The Catholic Church launches a PR campaign against pending bill HB 1947 in response to the increased momentum by child sex abuse victims and advocates to reform the statute of limitations. HB 1947 makes it possible for more child sex abuse victims to bring lawsuits against any Pennsylvania diocese which enabled and protected their predators.

Tonight in Philadelphia, Pennsylvania at 6pm advocates gathered to send message that Catholic hierarchy's opposition to victims' access to justice is immoral and wrong. 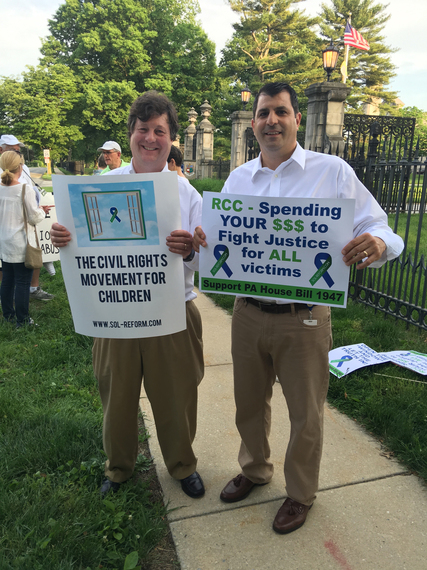 According to the press release from Foundation to Abolish Child Sex Abuse:

Archbishop Chaput, with the aid of his lawyers and a PR firm, has launched a no holds barred, multi-faceted, expensive communications campaign aimed at convincing Philadelphia Area Catholics that changing the laws pertaining to the sexual abuse of children is a wrong, unfair and will cause the archdioceses to go into bankruptcy, close many more schools and severely limit financial resources for their many ministries.

Chaput wants them to call their legislators and tell them not to support pending bill, HB 1947.

HB 1947:
removes the criminal SOL for child sex abuse
extends the maximum age to file a civil suit to 50

Next Sunday, June 5th, survivors of child sex abuse, along with legal scholars, advocates and others will join together for the Walk For A Window across Brooklyn Bridge.

The goals of child sex abuse statute of limitations window legislation include: 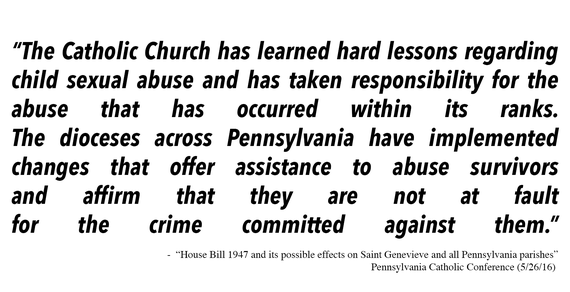 "The Catholic Church has learned hard lessons regarding child sexual abuse and has taken responsibility for the abuse that has occurred within its ranks.  The dioceses across Pennsylvania have implemented changes that offer assistance to abuse survivors and affirm that they are not at fault for the crime committed against them.

The Church has also taken great strides to protect children and provide financial assistance for survivors and their families, no matter how long ago the crime was committed, and for as long as necessary. Children and adults are trained to recognize and report signs of abuse to ensure that the children in our care are safe and secure. To date, Pennsylvania's dioceses have spent over $16.6 million to provide compassionate and supportive victim assistance to individuals and families.

Despite that, state lawmakers are considering legislation that would retroactively nullify the statute of limitations for filing a civil lawsuit alleging childhood sexual abuse. It would force parishes, dioceses, schools, and charities to defend cases that are 20, 30, or 40 years old, long after the perpetrator and possible witnesses have died or clear evidence is gone. It could lead to the closure of parishes, schools, and ministries of today's Catholics, who are in no way responsible for abuse that occurred decades ago."

Child sex abuse advocates present the following in support of the impact and relative success of window legislation:

The Relative Success of SOL Window and Revival Statutes, State-by-State

Utah - window and retroactive extension to age 53 against perps and aiders and abettors.

Stay updated on this nationwide movement at http://SOL-Reform.com.