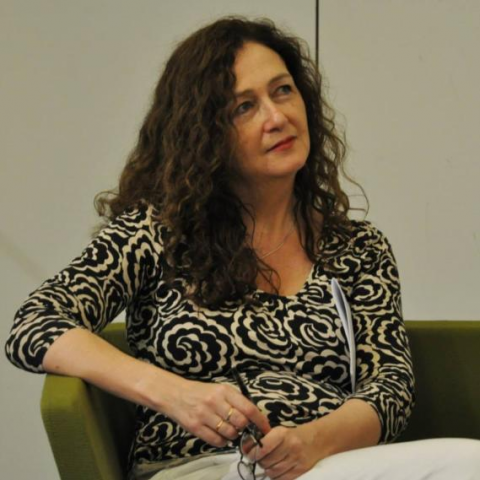 Over the years, Cathy Galvin had forged a formidable career as a journalist and editor at The Sunday Times and Newsweek to name just a few. She has established herself as a powerful champion of the short story by setting up the lucrative Sunday Times EFG short story award and London's premier short story literary salon, The Word Factory.

Amongst these achievements, Galvin has branched out into poetry, and her new pamphlet of sonnets, Black and Blue, is a perfectly formed masterclass in poetic risk-taking. These poems are filled with vivid imagery and ideas that run the gamut from mourning the loss of loved ones to the celebration of all that is meaningful in life. There is a gorgeous melancholic tone here, but one that is tinged with wisdom, passion and experience.

When asked how the project came about, Galvin says:

Nothing would have happened if I hadn't taken a risk. Journalists are not the sort of people who write poetry -- are they? A year after my father died, the first sonnet, Black and Blue, seemed to fall onto the page. The shape of it is a clear visual memory of the two of us facing each other in his front room in his final weeks, though at the time neither of us realised how little time was left. It came almost as a scent of all that room contained of his life.

When my mother died when I was eleven and my sister was six years old, he seemed to centre himself in that house, in that particular room and chair. He cooked and cleaned for us -- proud and alone -- and worked in a factory as a machinist. I have always loved poetry but somehow felt writing it was not for the likes of us, the working class. I believed from the age of fifteen that journalism was my vocation but, at the same time, I was devouring poetry.

This project in some ways began in the moment that first sonnet was written. Following my father's death, I returned to the city where he had lived and I grew up (Coventry) to take an MA in Writing (creative writing) at the University of Warwick. I had been a journalist and editor for thirty years but I wanted to explore a different kind of writing.

Once at Warwick, she was encouraged by her tutor, the poet David Morley, to try writing

a crown of sonnets -- 15 linked sonnets where the last and first lines are echoes of each other. Like the first I wrote, the sonnets almost fell onto the page. There's nothing ivory-tower about this process. Many were written as I sat on the train. One, in Notes on my iPhone as I was having a pedicure.

What poets have most influenced her work?

Thom Gunn -- a master of classic form and syllabics and all of his work true and lyrical. Probably the most profound influence was Ted Hughes: his power and mythic imagery were emotional dynamite to a teenage imagination and his landscapes were the ones I was familiar with from my father's home in the Pennines. The poets who continue to take my breath away include Wallace Stevens, Edward Thomas, Elizabeth Bishop, Shakespeare, Seamus Heaney and Paul Muldoon. George Szirtes' crown of sonnets to his own father was a strong influence, and I'm captivated by the narrative power of both Alice Oswald and David Morley. I'm currently reading David Harsent: Fire Songs is an astonishing collection. And Kei Miller- - an honest, musical voice.

What has been the highpoint of her time curating The Word Factory?

The Word Factory is its own kind of poetry: Something that came from the imagination -- no organization supporting the form in this way had existed before -- and to my continuing astonishment, it is now an accepted part of the literary landscape, supported and run by a network of talented writers...Incredible highlights come to mind -- all of them captured on film: the anti-romanticism of AL Kennedy; the forensic intelligence of Lionel Shriver; the driving brilliance of Kevin Barry; the humour and passion of both Hanif Kureishi and Alexei Sayle. Personal favourites include stories and discussions with David Almond and AS Byatt, the singing of Val McDermid, the dark excellence of Clive Sinclair. Then there was your electric reading for us in Leicester last year, Diriye. And most satisfying of all - last Saturday at the Word Factory, in the company of Jon McGregor and Tessa Hadley, we were all loved up on Valentine's Day when our own Zoe Gilbert, who runs our monthly short story club, read from her Costa prize-winning short story, Fishskin, Hareskin.

Finally, if she had any words of wisdom to offer her 13-year-old self, what advice would she give?

I would tell myself the things I didn't have a mother to tell me and which I now tell my own children: you are beautiful. You are loved. Be open. Trust your instincts. There's a wonderful line from the current TV adaptation of Hilary Mantel's Wolf Hall: it's something like -- it's easy to be desired. Being valued is far more difficult.

I would say walk away from any person or situation that disrespects you. Make sure, in the speed of life, that you have a space where the spirit and truth of what is in your heart can get through. Don't worry about being like everyone else: we aren't in a herd; we are unique. I'd also say, Cathy -- watch less, write more. Come out of the shadows.

Cathy Galvin's Black and Blue (Melos Press) is out now. You can connect with Cathy Galvin via Twitter.