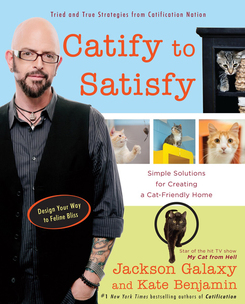 Imagine for a moment you were suddenly placed in an alien city where you knew no one, didn't speak the language, had no idea where anything was and were not provided with any tools to navigate your new surroundings. For most of us, this would be a pretty frightening experience that would strongly impact our feelings and behavior as we tried to cope as best we could. The same thing happens to a cat when he is plunked down into a human home and no effort has been made to alter the environment so it is welcoming, comfortable and meets his uniquely feline needs. The result is often an insecure, unhappy cat who hides under the bed, considers the litterbox a mere suggestion to be frequently ignored or doesn't get along with other cats, your partner or even you.

The authors of Catify to Satisfy get this. Jackson Galaxy, star of Animal Planet's My Cat From Hell, and Kate Benjamin, cat interior design expert, have made careers out of helping people solve seemingly intractable problems with their cats by making their homes suitable not just for humans, but felines as well. Simple changes to the territory occupied by cat and human - in other words, catifying the home - can lead to a more fulfilled cat and a better relationship with her guardian. 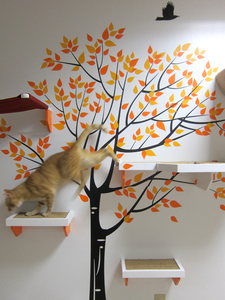 Catify to Satisfy lays out four basic steps for achieving this: (1) set up a base camp - a specific place within the home with familiar scents and objects where a cat can always go and feel secure, but remain accessible, (2) re-direct scratching behavior away from valuable objects and towards something acceptable to the cat and yourself, (3) strategically place litter boxes to avoid elimination in unwanted places and (4) create "cat super highways," physical paths which give your cat vertical space and multiple routes for traversing a room.

Galaxy and Benjamin not only show how to implement these approaches, incorporating a treasure trove of photos from actual homes, they delve into the feline psyche and explain why. For example, cats are both predators and prey in nature - they are on the lookout for small animals to hunt but also must be on the watch for creatures further up the food chain who see them as a potential meal. Taking into account these dual roles, a spot where a cat will feel most confident is one where he is protected yet can still survey as much of his territory as possible. A position relatively high up can achieve this. Shelves and furniture (cat and human) can be arranged to create a super highway, allowing your cat to climb vertically to a good vantage point and move about the room at the same level. 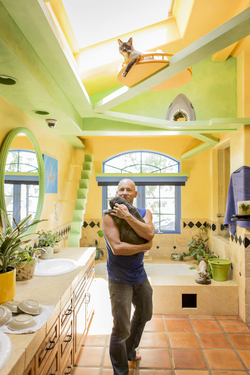 After reading the chapter on cat super-highways, I found myself looking at my own space differently. My cats will go from a chair up onto my desk, then climb successively higher from the printer to the top of the fish tank to the top of the refrigerator, ending up atop the armoire (I live in a New York City studio, in case you're wondering about the furniture arrangements). Now I realize there's a dead end when they reach the armoire which could lead to territorial conflict and a shyer cat not wanting to ever venture up. A solution would be a shelf near the top of the wall leading from the armoire to the kitchen area, then steps down to the counter.... Well, there you go. Catifying away.

As another example, my cat Shakespeare, so named because he has a lot to say, has decided the side of the dresser is the best place to sharpen his claws, not the sisal rope scratching post bought for him. The book taught me to observe the position he scratches in (vertically) and the material he favors (wood). The way to save the dresser is to put double-sided tape on it to discourage scratching and simultaneously mount a two by four on the wall in a place Shakespeare and I are both ok with.

Not that you have to settle for a simple two by four if you have a more refined aesthetic. The book's suggestions and examples of scratching posts, litter box containers, shelving and specially-made cat trees could fill a book on high-end interior design. Making your home simpatico for your cat does not mean sacrificing your visual pleasure.

Throughout all the excellent ideas put forth by Catify to Satisfy, you can feel the authors' unconditional love of cats and their mission to make their lives, and the lives of their guardians, better. There is even a chapter on how to catify cat housing at animal shelters, which should be required reading for all animal welfare professionals. Do yourself and the felines in your life a big favor - go out and get a copy and pick up extra ones as gifts for your cat-loving friends!