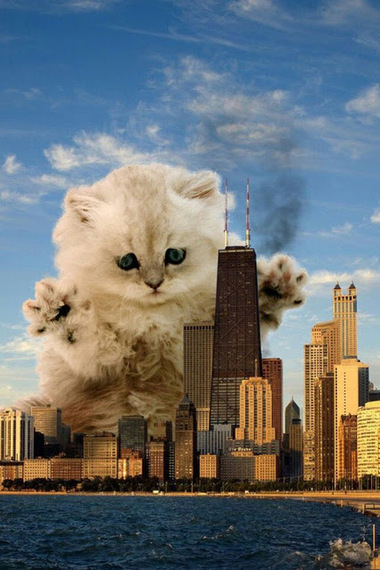 No one would deny that we have been drowning lately in a tsunami of very bad news. If you feel that things couldn't get any worse, you should know that they just have. And, if you are a cat-owner, they have just gotten so much worse, that you might want to stop reading this and go back to CNN for some comic relief.

Thanks to an alert reader who sent Life in the Boomer Lane an article from Vox, LBL is now aware that the greatest threat to her health and well being comes not from across the ocean. It resides, instead, in her own home, and she feeds and waters it daily and helps it to sustain it's human-hating, suicide-causing, homicidal maniac life. In her case, this creature has a name: Miracle the Cat. You may have one or more of these in your house, albeit possibly going by another name.

Research has been piling up to show that cats, like the people you meet on Match.com, are not quite what they appear to be.

Cats don't care about you as a human being.

Most people who have owned pets have noted that dogs spend a lot of time spinning around in circles and slobbering at their owners' approach. Leave the room to quickly grab a bowl of chili-flavored pork rinds, and, when you come back, your dog will act as though you have been gone for months and will resume spinning around in circles and slobbering. Cats, on the other hand, are aloof, leading cat lovers to cite superior intelligence as the cause. Recent research has shown otherwise. Your cat is neither intellectually superior, nor even marginally nice. Your cat, would, were it to have access to weapons of mass destruction, be plotting to end the world.

Cats are not grateful.

When a dog goes without food for awhile and we fill his bowl, he licks our feet in gratitude. When we neglect to feed our cats in a timely manner, they hiss at us and throw our cell phones into the toilet. The smarter ones then flush.

Our relationship with cats is one-sided, and we are on the losing end.

Daniel Mills, a veterinary researcher at the UK's University of Lincoln, says "Owners invest a lot emotionally in the cat relationship. That doesn't mean that the cat's investing in the same sort of emotional relationship." At the time, he said the results were inconclusive, but at the very least, it's safe to say that they haven't yielded the same obvious results that the dog studies have. In other words, had cats been able to speak Spanish, they would have started the Inquisition.

All dogs are merely friends we have not yet met. Cats are those mean people in school who steal our lunch money.

Why are cats so different from dogs in this way? Researchers speculate that the difference can be explained by evolutionary history: dogs were domesticated an estimated 15,000 years ago, compared to just 9,500 years for cats. (Most members of Congress are still in the process of domestication)

Additionally, it's believed that dogs were actively selected by humans to guard and herd animals, whereas cats likely selected themselves, spending time near people simply to eat the rats consuming grain stores. This difference, along with the extra evolutionary time frame, could explain why dogs are so much more interested in responding to the human voice, as opposed to cats, who merely want to claw our eyes out.

***LBL can hear cat owners protesting and hyperventilating, citing all kinds of touchy-feely behavior that Fluffy/Muffy/Bonky exhibits to show that all the research is wrong. ***

Number One on the list is a a cat's rubbing up and down against their leg as a sign of affection.
Sorry, deluded cat owners. Many researchers interpret this behavior as an attempt, by the cat, to spread his or her scent -- as a way to mark territory. Observations of semi-feral cats show that they commonly rub up against trees or other objects in the exact same way, which allows them to deposit pheromone-containing secretions that naturally come out of their skin. In other words, to your cat, you are a tree. Mostly a tree they don't like.

Cats purr because they haven't yet learned to throw their food bowls in our faces.

As part of 2009 study, researchers at the University of Sussex recorded the purring sounds made by 10 different cats in two types of situations: when they wanted food and when they didn't. As it turned out, the food-related purrs were noticeably different: the otherwise low-toned noises had a spike in the 220 to 520 hz frequency, which is similar to a baby's cry. Human study participants also rated these purrs as more urgent and less pleasant.

What may be going on, the researchers concluded, is that cats have figured out how to purr in a way that triggers humans' parenting instincts. They don't always purr this way, but they do so when they want food, because they know it'll get results. The same study noted that men in singles bar emit a throaty purr-like noise when in the presence of nubile, young females. They, also, want something other than the females are hoping they want.

Many cats don't actually like being petted by humans at all.

In a 2013 study, researchers measured levels of stress hormones in cats, with the intention of figuring out whether having multiple cats in the same household is a bad idea. That didn't turn out to be true, but they did find that the cats who allowed themselves to be petted had higher stress levels afterward than the cats who disliked it so much that they simply ran away.

Cats kill birds. They do it solely because they know birds give us such joy.

The number of birds killed by cats is at least in the tens of millions or more, many of which are the same happy fluffy little colorful birds from endangered species that flew around Snow White's head all the time.

Let us repeat this and say it once again in bold: Your cat's poop is making you neurotic, schizophrenic, suicidal and smell bad.

Of course, unlike rodents and some toddlers, we generally shy away from eating cat poop. So the chances of this happening are quite slim. But, since most humans are really quite good at becoming hysterical about the slim-to-none chances of contracting certain deadly viruses, we wanted to make sure we mentioned this.

What does all this mean for cat lovers? Clearly, nothing. We will continue to house and feed these maniacal creatures, empty their litter boxes on a regular basis, and allow them to deposit their pheromones all over us. They, in turn will thank us by barfing on our rugs and sleeping on our faces. We will then post endless photos of our cat on Facebook, doing fascinating things like sleeping.

LBL will now end this post, as it's time to scoop out the kitty litter, then go into the bedroom and scream at Miracle the Cat for the 100th time this morning not to sleep on LBL's pillow. Miracle the Cat will open her mouth, yawn (revealing a set of sharp scary feline teeth), and snuggle in more deeply. LBL will then take the kitty poop out to the trash. But she will take a stand. She will NOT post photos of Miracle the Cat on Facebook. LBL has some dignity left.

Where To Meet Singles Over 50