Like their human companions, stressed-out cats can listen to music to relax. And when felines are fighting the stress of a surgical procedure, it appears they don't want to hear rock or pop. They want the classics, at least according to new research.

Dr. Miguel Carreira, a veterinarian at the University of Lisbon, said there's always music playing in clinics and operating rooms and called it "an important element in promoting a sense of wellbeing in the team, the animals and their owners."

Carreira said in a news release that he noticed most cats prefer classical music and seem especially fond of George Handel, becoming "more calmer, confident and tolerant throughout the clinical evaluation."

Curious, Carreira designed a study to see if what he had observed holds true for cats in general. He put headphones on a dozen female cats undergoing neutering surgery under anesthesia and had them listen to two minutes of silence followed randomly by two-minute portions of Samuel Barber's "Adagio for Strings (Opus 11)," Natalie Imbruglia's "Torn" and AC/DC's "Thunderstruck." 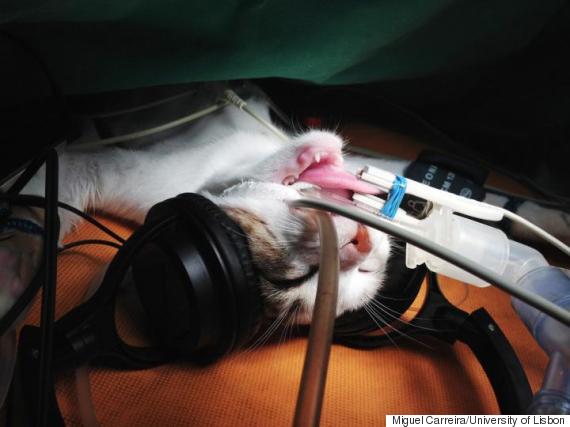 As measured by respiratory rate and pupil diameter, the cats were more relaxed while listening to Barber. They had "intermediate values" during the Imbruglia tune and were more stressed out by AC/DC, according to the study published this week in the Journal of Feline Medicine and Surgery.

A relaxed cat isn't just a better patient, Carreira said. Cats with less stress need smaller amounts of anesthesia, which can mean a lower risk of side effects and better overall safety.

The full text of the study is available here.