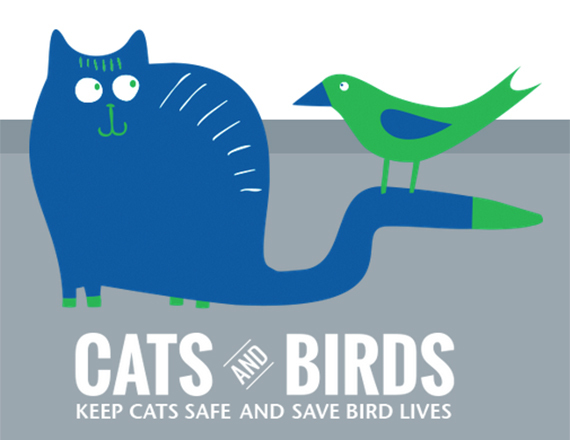 In the interest of full disclosure: I keep my cats indoors 24 hours a day, seven days a week. It's an uncompromising policy I've adopted for their safety -- and my sanity. I encourage others to keep their cats indoors, too. Why, then, do I object so strenuously to "cats indoors" efforts, such as Nature Canada's recently launched Keep Cats Safe and Save Bird Lives campaign?

It's a question to which I've given a great deal of thought since I first began blogging about the ongoing witch-hunt against outdoor cats nearly six years ago, and it mostly comes down to the following:

1. A (Largely) Disingenuous Premise
"The cat population is far from healthy in Canada," explains the KCSSBL website.

"In 2011, more than 50,000 were euthanized because the shelters weren't able to find homes for them. Twice as many cats are dumped in shelters compared to dogs, and whereas 30 percent of dogs are reunited with their owners, less than five percent of cats are returned home."

Additional threats include "diseases (e.g., feline aids, feline cancer, heartworm), vehicle collisions, and fights with wildlife and other cats." So what's not to like about a campaign to keep cats indoors, where they're safe?

First of all, it's difficult to believe that an organization that refers to feline immunodeficiency virus (FIV) as "feline aids" is truly interested in the welfare of cats; the use of the term betrays either a profound ignorance of the subject or a decidedly anti-cat agenda. More to the point, though: there's no reason to think that keeping pet cats indoors would make much difference in the number of cats "dumped in shelters" or reunited with their owners. It's almost certainly the case that the majority of cats ending up in shelters (and dying there) aren't owned at all.

As the Canadian Federation of Humane Societies (which, interestingly, is not part of the "coalition of individuals and organizations concerned about the well-being of cats and birds" that currently makes up KCSSBL) notes in a 2012 report, the greatest challenge for Canada's shelters -- and this is true across the U.S. as well -- is not the cats outdoors but the cats inside the shelters.

2. Endorsement of (Mostly) Junk Science
"Letting cats free-roam isn't just bad for cats," explains KCSSBL in its plea "to change how we care for our beloved feline friends." "It's bad for birds too."

"Environment Canada research estimates that, in addition to the impacts of climate change and habitat loss, 270 million birds a year die as a result of people. Cats, both pet and feral, are estimated to cause 75 percent of those deaths."

Referring to the same research, a February 29 CBC story announcing the launch of the campaign -- in which cats are described as both "beloved" and "killing machines" -- put the figure at "some 200 million."

Not that any precision is warranted. As I've explained in some detail on my blog Vox Felina, this research is a classic case of junk science. No wonder the link provided on the KCSSBL website to "understand the assumptions involved in estimating these figures" mentions nothing at all about the assumptions.

In short: estimates of community cat populations were based not on anything even remotely scientific, but almost exclusively on mainstream media reports in which a person being interviewed (typically representing a shelter, humane society, or TNR group) simply threw out a number. In other cases, the "estimates" came -- also without any supporting evidence -- from the reporters themselves.

Environment Canada merely added up several such "estimates" and paid for the results to be published, thus giving the result -- along with its dire implications -- the appearance of legitimate science. This, of course, is not how science is supposed to work.

3. A Trojan Horse Used to Oppose TNR
Unfortunately, what Nature Canada's done here -- promoting policy based on junk science and giving that junk science additional (undeserved) credibility merely by citing it as rationale for their preferred policy -- is nothing new. Disguised as good advice for responsible cat owners, the American Conservancy's Cats Indoors! campaign has been doing much the same since it was launched in 1997.

More than anything else, though, ABC's used their campaign to combat trap-neuter-return (TNR) efforts. That's right: the same people who claim to be terribly concerned about the safety of our pet cats are lobbying hard for policies that would result in an unprecedented degree of killing unowned cats.

Whether or not KCSSBL follows suit remains to be seen.

Already there are troubling signs, though. The types of local laws promoted by KCSSBL -- mandatory licensing, at-large prohibitions, and the like -- were considered "the least likely [approach] to be successful" by all of the stakeholders who participated in a 2012 Canadian Federation of Humane Societies survey. Like ABC, Nature Canada seems to prefer shiny wrapping paper over such "unfriendly" evidence.

All of which raises serious questions about any public policy resulting from the latest "cats indoors" campaign.