For those of you who don't know, Cats: The Musical is back on Broadway. That's right, Andrew Lloyd Webber's 1982 smash hit classic is back, this time at the Neil Simon Theatre, directed by Trevor Nunn. Cats has always been a divisive musical: people either absolutely love it and are super fans, or can't stand it and enjoy mocking its existence.  To most, Cats is a very strange piece of theater and an even stranger phenomenon: how was is once the longest running musical on Broadway and one of the most internationally performed and translated musicals ever?

People who have not seen Cats often have a lot of questions about the musical: are they all really cats? Do they walk on all fours? Is there a plot? Are there actual characters? Why are they reviving it? Who wants to see the show again? Do they still wear those awful bodysuit unitard costumes?

To answer these popular inquiries: yes they are cats and they walk on two legs, but sometimes crawl. Surprisingly, there is a plot and there are very specific characters, some you'll even come to love. Andy Huntingon Jones as Munkustrap, Jess LeProtto as Mungojerrie, and especially Tyler Hanes as Rum Tum Tugger (who consistently manages to steal the show, even in songs he is not in) are give very memorable and enjoyable performances, standing out from ensemble of acro-cats, who are clearly more dancers than actors.

No one is entirely sure why Cats is being revived, but box office numbers and sold out performances prove that it was clearly a good decision. Old devotees flock to see it and bring their children, skeptical new people go out of curiosity, some go to see how weird it will be, other go and sing alone, some even show up in vintage Cats merchandise. 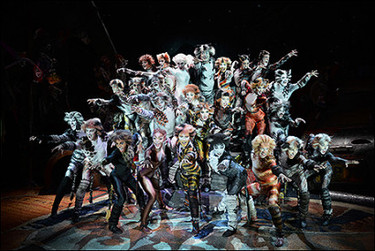 Cats is an odd, weird, rock musical that mixers electric guitar, drums, and synthesizer with flute and violin solos. It has songs that are famous as they are infamous, both anthems to fans and never-ending jokes to critics. Highlights from the score include: "Jellicle Songs for Jellicle Cats," the opening number which will forever be known as having the oddest lyrics in all of musical theater, "Magical Mister Mistoffelees," complete with flying cats, magic tricks, and a costume full of LED lights, and the canonical classic, "Memory" this time belted out by the legendary Leona Lewis. Lewis plays Grizabella and is making her Broadway debut--although her vocals are strong, her acting is weak and lack of experience is evident.

Yes, the ensemble members are in full body suits, leg warmers, wigs, and massive amounts of cat makeup--although the costumes, hair, and makeup are odd, the designer, John Napier, obviously has a lot of work to do. The choreography by Andy Blankenbuehler is is strange mix of feline and Fosse, but is executed quite impressively by the ensemble.  The set, also by Napier, is massively-scale trash the continues past the stage and into the side boxes and balcony, giving an impressive sense of immersion and depth. The entire production plays with scale, often in hilarious (albeit inconsistent) ways.

Cats is probably the weirdest musical you will ever see--but that being said you should still go see it. Watching this musical is a thrilling and unique experience, nothing like you've ever scene before. It is far rock concert, part laser light show, part Fosse dance piece, part pet store, part musical ballad, part allegory (maybe?). Regardless of what this musical is or isn't, watching it is very enjoyable for the sole reason that is so interesting to witness something so odd. The entire time you sit there thinking "what is happening right now?" and "how can they possibly keep this up for a two hour musical?" But somehow, they do. No matter how bizarre Cats is, it will always be beloved, so don't underestimate this feline curiosity, it is certainly worth seeing.