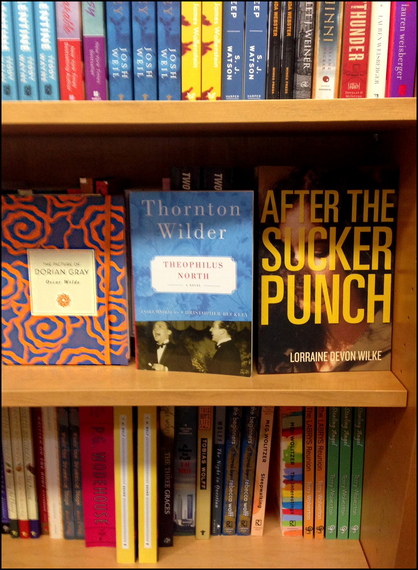 I had an interesting experience recently, one that emblemizes the continuing turf-war indie writers can get unwittingly caught up in amongst factions of the publishing world: those many have attempted to engage with little or no success (traditional publishers); those we're all seeking to involve in our independent marketing efforts (bookstores), and those who actually give us the platform and opportunity to fulfill our goals as creative writers (Amazon, Smashwords, and others). That's a big, unwieldy bunch and it turns out you don't need to be a big player to get buffeted by the undertow!

A friend walked me into a sweet little bookstore in a sweet little town on the northern coast of California, and this very generous friend, always a big supporter of mine, spoke to the clerk behind the desk, extolling the virtues of my book, After The Sucker Punch, asking if I could, as I have in other places, leave a couple of copies for sale in the store. Mind you, this bookstore is one that prides itself on its support of indie writers, so it wasn't a stretch to presume they'd at least be open to the idea.

The pleasant young woman behind the desk took a copy of my very professionally produced book to the back office -- "to check with the owner" -- and moments later, a fellow with fiery eyes (really) and an undeniably passive-aggressive edge to his demeanor (terse smile but poised for battle), approached with my book in hand, asked who the author was, and then proceeded to tell me he would not put my book on his shelves.

Because the physical copy, the actual paperback book, had been produced by CreateSpace, a subsidiary of Amazon, and he would not sell the work of anyone affiliated with the place that's "putting people out of business and destroying livelihoods." That's a paraphrase but pretty darn close. To say I was taken aback by the vehemence of his rationale would be an understatement. I mean, little old me being partnered with the destroyer of lives, and here I was just trying to hawk my damn novel! I felt immediately defensive but tried to rein it in as best I could; attempting to reason with him ("I'm my own publisher... I've got it in other bookstores... it's won awards"), but he was firmly pitched on his soap box.

Waving my book around like a wet rag, he went on to itemize his (many) complaints with Amazon in general, then began detailing the formidable complexities of Amazon's bookkeeping he'd have to deal with if he took my book. But even when I clarified that I could simply give him the books to sell and he would deal directly with me -- leaving Evil Amazon out of the equation -- he was immoveable. He sputtered about this or that, even (albeit begrudgingly) offering that I could "maybe do a reading here at some point if you want," but I responded, "why would I do a reading in a place that won't sell my book?" We went round and round but ultimately it was clear this was a political issue, not a logistical one.

Which was odd and ironic for me, particularly after working as hard as I have to produce a good book, spend my time, energy, and considerable sums to promote and market that book, and, yes, do much of that with the help of a company that has given indie writers like myself the means to do for ourselves what others had been unwilling to do for and with us. To then have a bookstore owner reject that work out-of-hand because of my minimal connection with said company is... did I already say ironic?

Look, I get it: lots of businesses, jobs, careers, ways of life, etc., have been irrevocably altered, impacted, lost to the march of changing technology. Think of print shops that used to typeset our resumes, the typewriter industry as a whole, the greeting card business, companies that make stamps... hell, even the old horse n' buggy trade! Things change, tastes change; the way we do business changes, and anyone who wants to survive has to change as well. It can be painful, people and professions have gone under along the way, but we are all obligated to learn, adapt, grow; embrace innovation and invention. It's always been that way: survival of the fittest, the most adaptable. That will never change.

And bookstores? They need to adapt and change, too, as many have. Because they are valuable, sacrosanct for some. Holy places. The church of the passionate reader, the beloved local business that nurtures local writers; a community's heart and soul thriving on that most precious of commodities: ideas, words, art, emotion.

But there's also the fact that bookstores, small and large, even those that do welcome indie writers, are supplied by those huge, fire-breathing traditional publishers who've long held the world of books under their thumbs and have only, in more recent years, lost ground to the changing tides. But while they still hold sway, and still have their allegiances within the media and marketplace, they remain the prime suppliers of what goes into bookstores: books written by the evermore exclusive cadre of authors who've been invited into the sanctum of the "traditional publishing deal," understandably trading their creative and financial autonomy for the heft of a big company's imprint and distribution, some marketing assistance (though that has deeply diminished), and the tangential glow of being considered a bona fide, traditionally published writer. Which is something the media, the publishing marketplace, and, it seems, some bookstores, still see as having greater perceived value than.... well, other published writers.

Those Big 5 companies -- and/or the bookstores themselves -- set prices for those books that are often much higher in stores than readers can find on sites like Amazon. So readers buy them on Amazon. Yes, this impacts stores; yes, it diminishes their customer base, but it's economic logic: who wants to spend $25 for a book they can get elsewhere for $10? And, as a bonus, while they're there on Amazon or Smashwords, they can find a whole slew of other reasonably priced books to consider -- many of which are quite excellent -- written by indie authors the Big 5 -- and many bookstores -- won't give the time of day.

It's not hard to figure why the marketplace is evolving as it is.

There's obviously much to say on this turbulent, impossible to predict industry, but since this is a piece about a bookstore, let me wrap it up with this:

Bookstores need to rethink their strategy. To ignore, dismiss, or reject the quality work of independent writers because those writers have had their books produced by an Amazon-affiliated company is just plain silly. And self-sabotaging. If this fellow had stocked my books, I'd have done everything I could to promote that fact, promoting his store along the way. I'd have written an article here, certainly one at my publishing blog; I'd have set up a reading and brought in interested customers who'd likely buy other books he stocked and potentially become regular customers. I'd have purchased books at his store whenever I was in the area, and there would be a general aura of good-will around his store and my books, and that just leads to more good-will. He lost that opportunity, which is unfortunate.

But me? I'll just set up my wares and focus my brick and mortar attention on places that do support quality indie writers; I'll promote like hell and bring in enthusiastic book lovers, many of whom will not only buy my book, but the wares of wherever it is my book may be. Win/win.

And I guarantee not one of those merchants will give a hoot where I got my paperback printed. As it should be.

Follow Lorraine Devon Wilke on Facebook, Twitter, and Rock+Paper+Music. Find details and links to her other work at www.lorrainedevonwilke.com and her Author Page at Amazon, watch her book trailer HERE, and be sure to follow her adventures in independent publishing at her book blog, AfterTheSuckerPunch.com. Watch for news about the launch of her new novel, HYSTERICAL LOVE, currently available for pre-order, with a pub date of April 7, 2015 @ .