These findings might shed new light on when the New World was first settled, scientists added.

The time frame during which humans first reached the Americas remains hotly debated. One key to settling this controversy would involve uncovering early examples of human artifacts, such as art.

Scientists discovered one ancient sample of such art in a cave named Lapa do Santo in central-eastern Brazil. The region is home to Luzia, the oldest human skeleton found to date in South America.

Lapa do Santo is one of the largest rock shelters excavated yet in the region, a limestone cave covering an area of about 14,000 square feet (1,300 square meters). Here, researchers have found buried human remains, tools made of stone and bone, ash from hearths, and leftovers from meals of fruit and small game.

In 2009, digging about 13 feet (4 meters) below the surface, the scientists found a rock carving or petroglyph of a man packed into the side of the cave. The figure, which appears to be squatting with his arms outstretched, is about 12 inches (30 centimeters) tall from head to feet and about 8 inches (20 centimeters) wide. [Photos of Phallus Petroglyph and Cave] 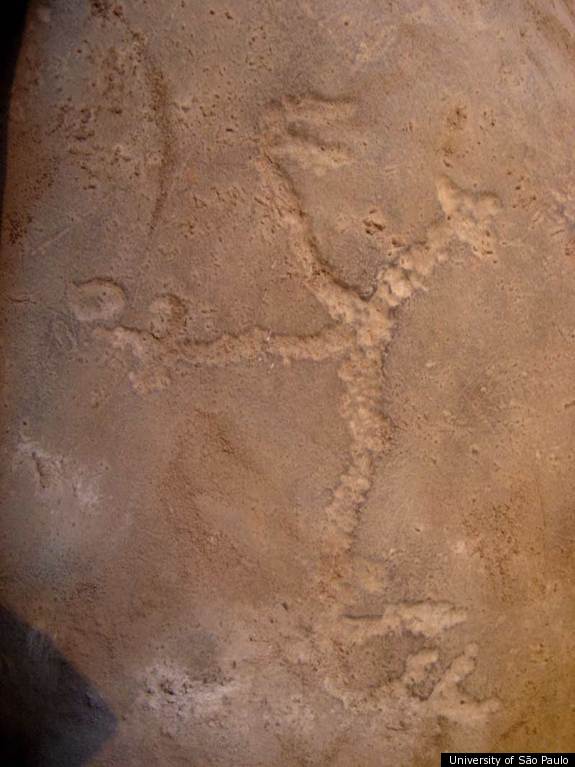 "We discovered this petroglyph in the final moments of excavation at the site," said researcher Walter Alves Neves, an archaeologist and biological anthropologist at the University of São Paulo in Brazil.

The engraving is also depicted with a relatively oversized phallus about 2 inches (5 cm) long, or about as long as the man's left arm.

"The figure is probably linked to some kind of fertility ritual," Neves told LiveScience. "There is another site in the same region where you find paintings with men with oversized phalluses, and also pregnant women, and even a parturition (childbirth) scene."

Carbon dating and other tests of the sediment covering the petroglyph suggest the engraving dates between 9,000 and 12,000 years old. This makes it the oldest reliably dated instance of such rock art found yet in the Americas.

When this carving is compared with other examples of early rock art found in South America, it would seem that abstract forms of thinking may have been very diverse back then, which suggests that humans settled the New World relatively early, giving their art time to diversify. For instance, at one site in Argentina named Cueva de las Manos, paintings of hands predominate, while at another site there, Cueva Epullan Grande, engravings have geometric motifs.

"It shows that about 11,000 years ago, there was already a very diverse manifestation of rock art in South America, so probably man arrived in the Americas much earlier than normally is accepted," Neves said.

The scientists detailed their findings online Feb. 22 in the journal PLoS ONE.

Advertisement
Copyright 2012 LiveScience, a TechMediaNetwork company. All rights reserved. This material may not be published, broadcast, rewritten or redistributed. ]]>
Go To Homepage