Animals see with their eyes, right? Not if you're an unusual species of cave catfish native to Ecuador. This bizarre creature finds its way in darkness with the help of "teeth" that protrude from its skin, according to new research by biologists at the University of Maryland. And, yes, these teeth--known to scientists as denticles--actually are surrounded by dentine and capped in enamel.

The fish (Astroblepus pholeter) isn't the only species to sport denticles. Other fish use theirs for cutting and protection or to reduce drag when swimming, the researchers said. But this is the first time scientists had seen fish using denticles to "see" in the dark.

The researchers, along with scientists from the National Institutes of Health and Pontificia Universidad Católica del Ecuador, say evolution offers a simple explanation for the fish's "seeing eye" denticles.

"We have now a whole new sensory organ to examine," Dr. Daphne Soares, an assistant professor of biology at the University of Maryland, said in a written statement. "More importantly, we found a new way in which evolution has allowed animals to live in this challenging environment. It's not only completely dark but the world around them is also flowing fast."

The study was published in the August 21, 2012 issue of Current Biology.

Here's a look at how the denticles protrude from the skin of Astroblepus pholeter: 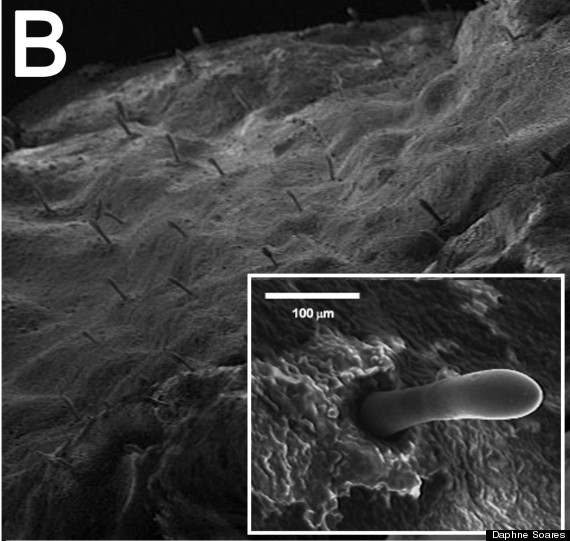