WASHINGTON -- The Congressional Budget Office has released updated estimates on the Affordable Care Act's impact on both the budget and the health insurance industry. The findings show that the president's signature health care law is actually growing cheaper to implement, costing the government $5 billion less in 2014 than was previously projected. The law also is projected to cover more individuals than previously believed, owing, in part, to some broader workforce trends.

But a significant portion of the population will remain uninsured even with the law fully implemented. And the costs to individuals and employers, while lower than previous estimates, still provide critics of the law with ample fodder.

Below are some additional highlights from the CBO report:

Twelve million more non-elderly people will have health insurance in 2014 than if Obamacare had not become law. CBO's projections on this crucial measure of the law's success are higher than recent surveys from the Rand Corp., which estimated a 9.3 million reduction, and from Gallup, which shows a 3.5 million decline.

For all of 2014, the CBO expects 6 million people to be covered by private health insurance policies purchased through the exchanges, fewer than the 7.5 million enrollment figure touted by the White House. That's mainly because the CBO expects people to cycle in and out of different types of coverage over the year -- perhaps by taking a new job and the health benefits that come with it -- and because some enrollees won't pay their first month's premium or will let their policies lapse during the year. 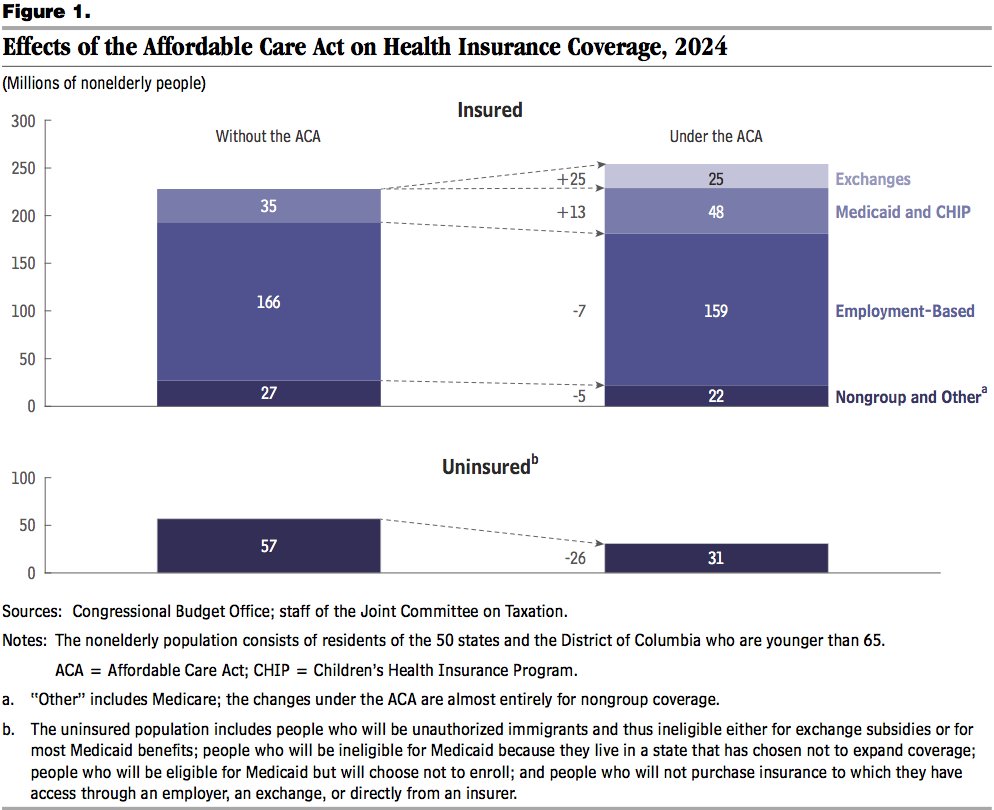 Most of them will remain uninsured because they will have declined coverage, the CBO said. Forty-five percent of them will have access to private insurance through the exchanges or an employer, while 20 percent will be eligible for Medicaid but will not sign up. In addition, 30 percent will be undocumented immigrants, who aren't permitted to use the health insurance exchanges or enroll in Medicaid, and 5 percent will be legal residents eligible for Medicaid but living in states that refused to expand the program under the Affordable Care Act.

Medicaid and the Children's Health Insurance Program will grow by 7 million more beneficiaries in 2014 than if Obamacare weren't law, the CBO said. The law calls for an expansion of Medicaid eligibility to 133 percent of the federal poverty level, or about $15,300 for a single person, but 24 states declined to broaden the program this year. The number of enrollees will jump next year but eventually level off. The CBO projects that 11 million more people will sign up for Medicaid in 2015, and 12 million to 13 million per year between 2016 and 2024. The CBO does not estimate how many more people would have signed up for the programs this year had their states chosen to participate in the expansion.

The cost of the health care law is falling, according to the CBO. Between 2015 and 2024, the price tag of Obamacare will be $1.383 trillion, $104 billion lower than prior estimates. This is because of a combination of factors, including a reduction of $165 billion in the gross costs of coverage (the government will spend less on exchange subsidies) and fewer people and businesses paying penalties for either not purchasing coverage or not providing it to their workers. 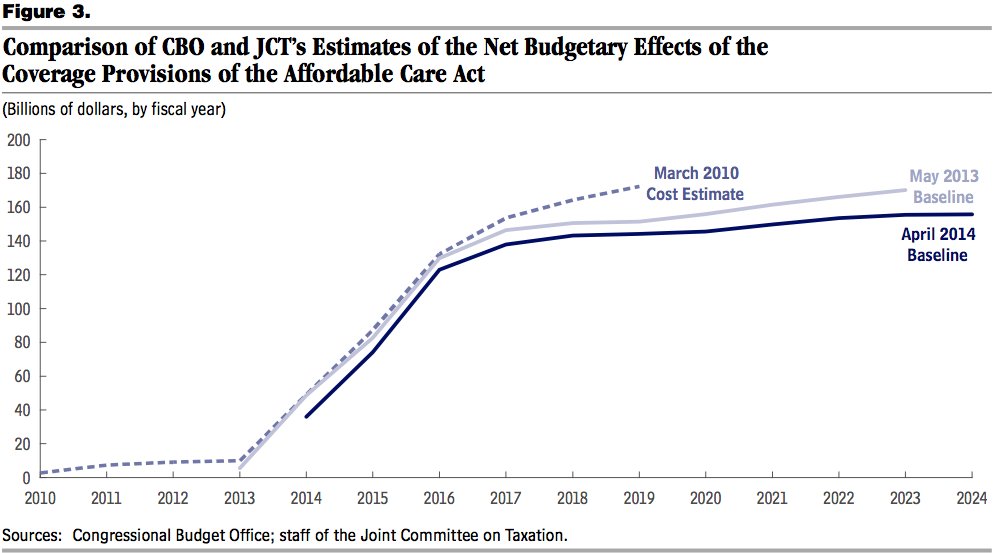 For example, the CBO projects that the government will collect $46 billion in penalties from those who choose not to purchase health insurance. This is less than its February projection of $52 billion in individual mandate penalty payments. The CBO also projects $139 billion in penalties for employers who do not provide health coverage to their workers as mandated under the law. The February projection was $151 billion, but it was reduced, in part, by the Obama administration's decision to relax the employer mandate.

Another reason for the revised cost estimate is new projections of price increases for health insurance sold on the exchanges in future years. The CBO said that the national average unsubsidized cost, which is used to calculate consumers' tax credit eligibility, for the benchmark "silver" insurance policy was $3,800 for 2014. Exchange enrollment is projected to jump to 13 million in 2015, and new customers are expected to be relatively healthier than those who enrolled this year, so CBO expects that average premium to rise $100 next year, then grow at 6 percent each year through 2014. CBO's prediction contrasts with claims by insurers like WellPoint, which have predicted rates will rise by 10 percent or more.