Tired of dealing with Charlie Sheen but not tired of having a cash cow TV show, CBS staged a sitcom coup d'etat this week, replacing Sheen with three new madmen... 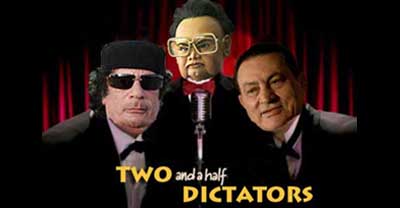 Coming soon to Monday nights: Muammar Gaddafi, Hosni Mubarak and Kim Jong Il as Two and a Half Dictators.

"To cancel a No. 1 series, we'd have to be as crazy as Charlie," producer Chuck Lorre explained. "The trick was finding a star who could match Sheen's ego and insanity. Mel Gibson? Kanye West? Sorry, but neither has both tiger blood and Adonis DNA."

In the end, Lorre retooled the show's concept with an entirely new cast. "We had to destroy the show in order to save the show," he said.